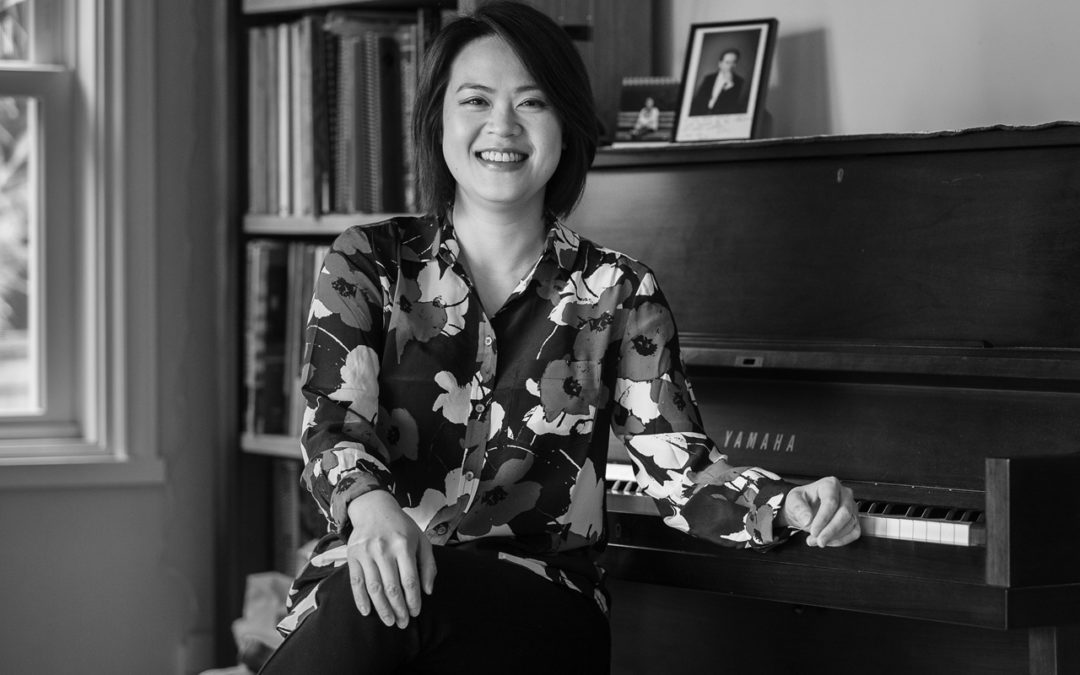 “My favorite music is the music I haven’t yet heard.”

The words evoke a spirit of fire shared by those who are ever-inspired to propel themselves forward into the musical worlds of the unexplored and the unexpected. It’s a spirit that helps light the way for others to enjoy new journeys and adventures, and feel that the world must still hold beauty yet to be found. This fire is especially radiant and blazing in the living, breathing, and evolving practices of jazz and classical music; stewarded by those who understand the need to preserve and hand-down their historical legacies yet champion the urgency to nurture their growth.

Conductor to Seattle Modern Orchestra—the only large ensemble in the Pacific Northwest solely dedicated to the music of the 20th and 21st centuries—Tai offers these words in our conversation as a reflection of the spirit that continues to feed her as a guide for both audience and musician alike in these uncharted territories.

Born in Taipei, Taiwan, Julia Tai has been steeped in classical music her entire life, beginning her violin studies at age four and piano at eight. She received her Bachelor and Master of Music degrees from the University of Southern California Thornton School of Music and her Doctor of Musical Arts degree in orchestral conducting from UW.

Tai’s journey with SMO began after graduating from UW in 2010. She and SMO Co-Artistic Director Jérémy Jolley co-founded the ensemble shortly thereafter with their inaugural season, mutually inspired to bring a consistent presence and elevation of contemporary classical music to Seattle. They soon found a home at the Chapel Performance Space in Wallingford’s Good Shepherd Center—one of Seattle’s most beloved sanctuaries for hosting new & creative music, known for its stain glass windows, warm resonance, and high ceilings that can invoke a sense of intimate sonic spirituality.

Now in their 10th year, SMO is celebrating their milestone with a year about town with a series of performances that will engage a menu of cherished Seattle spaces and partnerships. Earshot Jazz lovers might remember SMO from this past 2019 Earshot Jazz Festival, when they performed at Town Hall featuring improvisational and compositional pioneers Darius Jones and Wayne Horvitz. The concert kicked off SMO’s current 10-show 2019-2020 Season epic, and embodied all the wondrous interstitial space between classical and jazz as forms of new music.

Tai loves working in that in-between space and is drawn towards composers whose work has been highly informed by the practice of jazz, who incorporate improvisational and chance elements in the performance of the work, like Horvitz, Earle Brown, and George Lewis. For the conductor, the improvised portions of these pieces can look like a deconstructed score waiting to be pieced together, where phrases and sections of a composition are broken out into ‘cells’ for the conductor to have as a structural palette, and to be shared with musicians in the ensemble in a two-way set of communication.

These compositions allow Tai to not only steep herself in some of the more improvisational and freeing qualities of jazz, they also highlight another one of the joys she finds in conducting: Working in vulnerable spaces of the unknown where mutual trust is paramount. Where the musicians on stage at times become the ones guiding you through their own influence on the musical direction of the piece. She refers proudly to the trust she has earned with her ensembles to allow for this push and pull to exist in an honest way that elevates the music itself to its highest levels.

“Together you create the power”

“A lot of people think that you’re God or something, and you’re just up there on a pedestal, but it’s very different. You have to be in the middle of things. The most fulfilling experience of conducting is when you feel such deep connections with the musicians. For me that’s what I look for, is what I live for. It’s almost like together you create the power as opposed to the power coming from one individual.”

When Tai critically engages with a new work by a living composer, in order to fully internalize and be able to communicate the unfamiliar processes, musicality, and conduction of the piece, she likes to use the composer directly as a resource to find out what they’re thinking when they’re writing the piece. With the help of their insight, she can better navigate to the core musicality in the piece with the ensemble and understand its intent.

In addition to being the Co-Artistic Director of Seattle Modern Orchestra, she also is the Music Director of Philharmonia NW—a regional chamber orchestra with 45–50 members that perform for more fixed instrumentation and structured musical scores. Though Philharmonia NW stays engaged in presenting and commissioning works by living composers, they also feature pieces by the revolutionary vanguards of previous generations. In particular she uses Beethoven as an example—Philharmonia NW will be performing Beethoven’s 250th with Kirkland Choral Society April 18 at Benaroya Hall. Through the practice of her work as a guide in new music, talking with living composers, and the overall process of critically diving into the unfamiliar, she comes to find radiant undiscovered treasures in Beethoven’s music that allow her to have a renewed sense of awe in his work and the legacy he gifted. It’s a mutually-fulfilling component of being able to work in both Seattle Modern Orchestra and Philharmonia NW.

“I love Mozart and Brahms and all that repertoire. But I also love exploring new sounds, new pieces, new composers. So I am glad to have those two different channels. When I learn new things, I go back to the old repertoire differently.”

Tai is now finally ready to admit that she and SMO are no longer “new kids on the block” and as part of this season, SMO are staking their claim as a premier contemporary ensemble by expanding their vision of the contemporary spirit to a host of new spaces across the city.

In addition to their features at Town Hall, their 2019-2020 Season includes performances at some of the hippest venues around: home base Chapel Performance Space, National Nordic Museum, Folio: The Seattle Athenaeum Library, Foster/White Gallery, Fremont Abbey Arts Center, BASE: Experimental Arts + Space, and The Royal Room.

When talking with Julia, one gets the same sense of talking with any devout artist, who give a strong presence of focus and purpose yet are so busy with doing the actual work that reflecting back on accomplishment can feel a bit jarring. When I ask about what Tai would like her impact in music and the world-at-large to be through her work—a question that felt largely unconsidered during our conversation before now—the words she offered were expansive, beautiful, and resonant: “I really hope that me being this Taiwanese female conducting Mahler is a different experience than the people who have come before me… and people can see that a successful conductor can come in many different forms. That music-making, the ultimate of fulfilling people’s lives and hearts, can come in so many different forms. And that goes the same not just musically, but [for] society as well.”

← In Memoriam: Walt Tianen Letter From The Director →