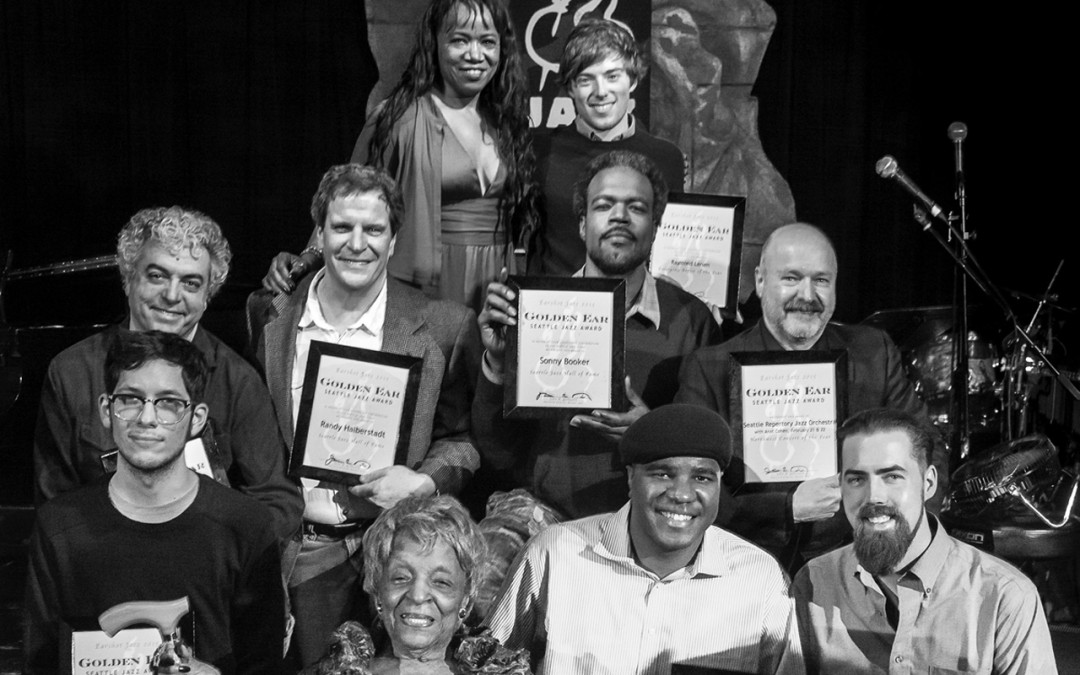 Last month at The Royal Room, a full house of artists and audiences alike gathered to celebrate recent accomplishments by Seattle’s jazz community. Opening and closing the night were Eugenie Jones and her band of Peter Adams on piano, Tim Carey on bass, Brian Smith on drums, and Ernesto Pediangco on percussion, delivering a tight first set of wonderfully stylized covers, including “Summertime,” alongside vibrant original compositions with Latin and blues influences. They bookended the awards ceremony by inviting local musicians in attendance, such as vocalist Grace Love and drummer D’Vonne Lewis, to join in on the second set.

We congratulate all the nominees in this annual look at the region’s vibrant and thriving jazz ecology.

NW Vocalist of the Year

Eugenie Jones is a previous Golden Ear Award recipient, winning Northwest Recording of the Year with her 2013 album Black Lace, Blue Tears. But it was her strong work in 2015 that has earned her recognition as one of the premier vocalists of the region. Between an active schedule gigging throughout the Puget Sound and her solid sophomore album Come Out Swingin’, featuring Seattle heavy-hitters Bill Anschell, Clipper Anderson, Michael Powers, Jay Thomas, D’Vonne Lewis, and Ernesto Pediangco, this late-blooming vocalist has swung her way into the hearts of her listeners.

NW Instrumentalist of the Year

Few performances from the 2014 Earshot Jazz Festival stand out quite as much as Dawn Clement’s solo piano at the Thelonious Monk birthday celebration at Town Hall. Along with her well-received 2013 album Tempest/Cobalt, a May 2014 Earshot cover feature, co-forming the Golden Ear-nominated ensemble “Line Up” with Mark Taylor, and teaching at Cornish College, this performance cemented Clement as a force to be reckoned with in Seattle’s music community. This past year, Clement continued to gig regularly, including with Line Up, vocalist Jay Clayton, and renowned trombonist Julian Priester. The latter has even said of Clement, “In all this world of jazz, there are very few individual voices, no matter what the instrument.” And Dawn Clement is one voice Seattle needed to hear.

Over the past several years, Raymond Larsen has surfaced as one of the most in-demand young trumpet players in the Pacific Northwest. 2015 saw the UW alumus winning the Golden Ear Award for Recording of the Year, with his group Chemical Clock’s Bad Habitat. He also recently celebrated the long-awaited release of his ambitious “Modern Achievements” trilogy. With unique instrumentation and diverse compositional and improvisational approaches, he created three through-composed tributes to specific entries in a 1903 encyclopedia, Modern Achievements in Science, Invention, Commerce and History: “How Glass Is Made,” “New Studies of the Starry Skies,” and “When Mountains Blow Their Heads Off,” which premiered at the Royal Room last spring and was recorded live in January a special performance at the Chapel Performance Space.

Jovino Santos Neto Quinteto is a beloved five-piece ensemble that expertly delivers music with strong Brazilian influences, along with many other spices added to the mix. The quintet is Jovino Santos Neto (piano, flute, melodica, compositions), Chuck Deardorf (bass), Mark Ivester (drums), Jeff Busch (percussion), and Ben Thomas (vibraphone). A master pianist, composer, arranger, flutist, and player of a multitude of other instruments including the melodica and the accordion, Jovino Santos Neto is one of the top Brazilian musicians working today. Since moving to Seattle over 20 years ago, Neto has become an integral part of the Northwest’s jazz ecology, collaborating with many of the city’s musicians, teaching at Cornish College, and infusing the local music scene with much-needed Brazilian flavor.

NW Recording of the Year

Gregg Belisle- Chi’s debut album as a leader, Tenebrae, is a stunning exploration of compositions for solo guitar, along with three duets with his wife, Chelsea Crabtree, on vocals. There is a somber beauty, an ethereal, almost spiritual quality to the music, which offsets dark and even jarring textures with a pastoral radiance, often within the same piece. Though much of his playing has an accessible lyricism and solid grounding in the fundamentals of jazz, Tenebrae seems to orbit around a less definable realm: something more akin to eclectic avant-chamber music and open-minded experimental pop/rock songwriting, informed by jazz.

NW Concert of the Year

The Northwest’s premier big band jazz ensemble joined forces with internationally celebrated clarinetist Anat Cohen for a joyous and unforgettable two-night run in early 2015. Audiences hailed the performances, which featured a repertoire of great jazz from New Orleans, to Latin America, Eastern Europe, Israel, and beyond, as the best in SRJO’s 20-year history. “The band has been exceptionally tight the past couple of years, but the presence of such an extraordinary soloist kicked it up another notch,” noted the Seattle Times’ Paul de Barros in a review of the February 22 performance.

At 97, Ruby Bishop is a living Seattle institution of live jazz. Making her home base at Vito’s every Sunday evening, the vocalist/pianist has been wowing audiences for years as they witness her ebullient performances. Having inspired generations of local musicians for years, Bishop, surrounded by her family, was inducted into the Seattle Jazz Hall of Fame by fellow vocalist Eugenie Jones. Receiving a standing ovation by all in attendance, Bishop was overcome with joy as she thanked the crowd.

Randy Halberstadt has been a major figure on the Pacific Northwest jazz scene for many years. A multi-dimensional pianist, he is equally at home playing bebop, Latin, big band, and free jazz. He has performed with Herb Ellis, Matt Wilson, Bobby Shew, Joe LaBarbera, and many others. The longtime pianist for the Seattle Repertory Jazz Orchestra, Halberstadt was inducted by the big band’s co-artistic director Michael Brockman.

The late trumpeter/club owner was posthumously honored for his impact on Seattle jazz. “On behalf of Mr. Booker himself, he’d say this caps off his life,” wrote his wife, Laura May. “Especially in light of our losing the great Ernestine. He escorted her all over the world: Leningrad, Paris…They were kids together.” Sonny’s great-nephew Emmanuel Leonard accepted the award on behalf of the family.

Click on image to expand in new tab. Photos by Daniel Sheehan.