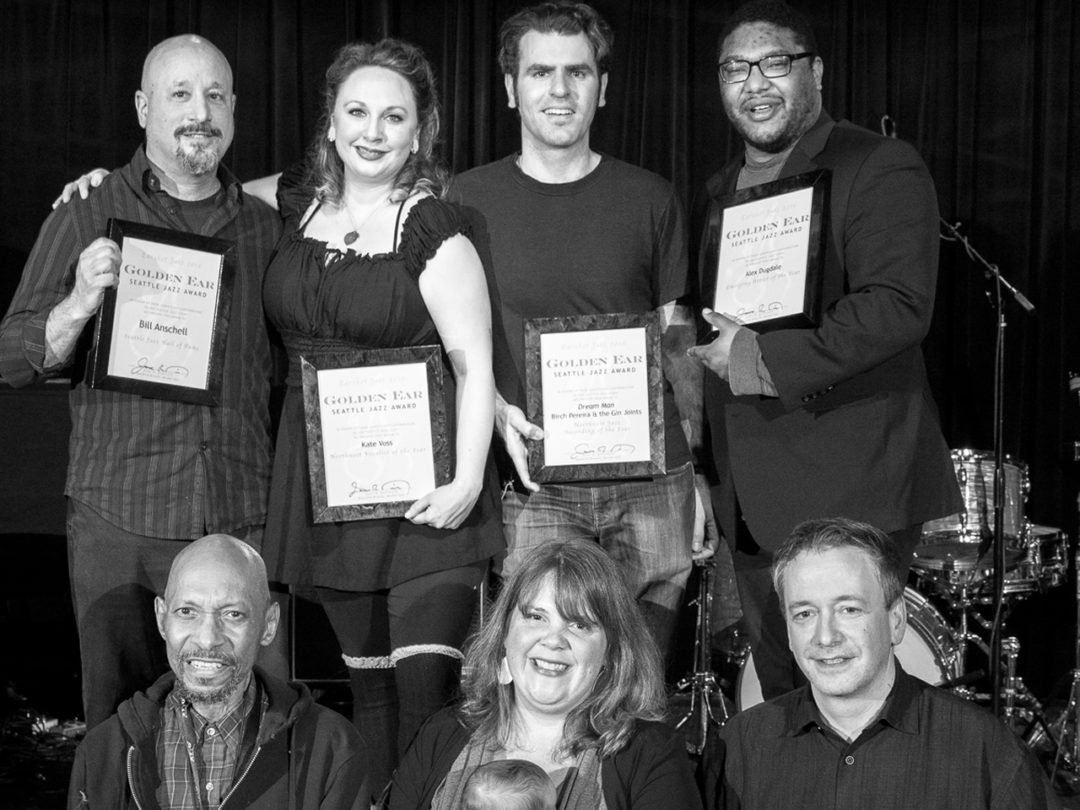 Jim Wilke, host of the nationally syndicated Jazz Northwest program, emceed the presentation of the Golden Ear Awards. In a night honoring current achievements in Seattle jazz, those in attendance were also treated to a celebration of the legacies of Julian Priester and Jim Knapp, who were each recognized for their remarkable careers. The evening also brought to light the importance of jazz, creativity, and art in today’s changing landscape, with speeches by award recipients and presenters.

We congratulate all the nominees in this annual look at the region’s vibrant and thriving jazz ecology.

“Over the years (and decades), there have been recurring cycles of popularity for many varieties of traditional country, early rock & roll, and ‘retro-swing,’ sometimes driven as much by fashion as by sound musical intent. Birch Pereira and The Gin Joints however, are clearly not about shtick, gimmicks, or ironic detachment. This is a top-shelf unit of superb musicians, and on their new album Dream Man, they explore a keenly curated repertoire of classic sounds, steeped with an obvious affinity and love for the music.

Birch Pereira is an almost eerily versatile bassist, arranger, and singer, as seemingly at home with the electronic beats and synth textures of his band Theoretics as he is wandering the dusty roads of American vernacular music with The Gin Joints. It’s a fairly rare upright bass player who can sing great lead vocals while laying down a locked-in groove, but Pereira makes it sound easy. His high tenor is delicate but authoritative, and always in the pocket, and the stripped-down but superbly effective arrangements are spot on.

Able to blend Willie Dixon, Hank Williams, Fats Waller, and much more into a single tasty brew, The Gin Joints obviously have a distinctive skill at deftly exploring the sometimes treacherous seams between country, swing and the roadhouse, while finding the timeless essence of great songs from any era.” (Earshot Jazz, June 2016)

Saxophonist Mark Taylor and pianist (and 2015 Northwest Instrumentalist of the Year) Dawn Clement recently launched a new ensemble that has delighted audiences, particularly in a memorable performance at the 2016 Ballard Jazz Festival. The two award-winning Pacific Northwest artists bring listeners a lineup of new, collaborative compositions, and, in this Concert of the Year, performed with drummer D’Vonne Lewis, bassist Michael Glynn, and special guest, trombonist Julian Priester.

Julian Priester is a celebrated musician who played with Max Roach, Duke Ellington, John Coltrane, Herbie Hancock, and many others before a long teaching career at Cornish College of the Arts.

Splitting his time between San Francisco and Seattle, saxophonist/composer/educator Anton Schwartz has become a significant force on the West Coast. With critically acclaimed releases, including 2014’s Flash Mob, which spent eight weeks in jazz radio’s Top 10 and earned a four-star review in DownBeat magazine, Schwartz has reinforced his reputation as a passionate but poised improviser and smart purveyor of captivating melodies. His impeccable quintet sees a rotating lineup of musicians, with Pacific Northwest regulars including bassist Michael Glynn, pianist Randy Porter, and drummer Matt Jorgensen, who joined Schwartz and vocalist Denise Donatelli in a successful outing at the 2016 Earshot Jazz Festival.

“A phenomenally funky drummer, with taste, feel, and chops to spare, Abouzied elevates every band he’s a part of, providing gems for breakbeat hunters for years to come….With humor and humility, he achieves a deft balance, exploring the technical and intellectual challenges in music while still forging a deep emotional connection with the audience” (Earshot Jazz, November 2016).

Happy Orchestra recently recorded an album, set to be released later this year, and plays regularly around the region.

Saxophonist/tap dancer Alex Dugdale is a graduate of Roosevelt High School and holds a Bachelors in Jazz from the Eastman School of Music and a Masters in Education from Seattle Pacific University. At Roosevelt, he performed in the jazz band and tap-danced in four annual productions of Ellington’s Jazz Nutcracker. He began tap-dance study at the age of six, and appeared in many Seattle productions. He instructs in the music department of Bishop Blanchet High School, and teaches band at six different Catholic grade schools in the Seattle area. He also works as a private instructor with Edmonds-Woodway High School bands, and continues to perform in the greater Seattle area with his group, the 2015 Golden Ear-nominated FADE Quartet. He first performed with Seattle Repertory Jazz Orchestra as a dancer in 2006, and now performs on saxophone as a regular member of the band.

Acclaimed for his warm tone, soaring lyricism, and masterful technique, flugelhornist/composer and recent Seattle transplant Dmitri Matheny has been lauded as “one of the most emotionally expressive improvisers of his generation” (International Review of Music). An honors graduate of the Berklee College of Music, Matheny vaulted onto the jazz scene in the 1990s as the protégé of jazz legend Art Farmer. Since then, he has garnered critical acclaim and a loyal international following, touring extensively throughout the United States, Europe, and Asia. With over 100 recordings to his credit, Matheny has released 11 albums as a leader. His latest is Jazz Noir, a fresh spin on crime jazz, film noir movie themes, and timeless classics, selections from which he recently performed in the monthly Art of Jazz series at the Seattle Art Museum.

Often blending genres together for a fresh take on standards, Kate Voss has been wowing Seattle audiences for the past 15 years. She received Special Mention at the Seattle-Kobe Jazz Vocal Queen contest in both 2014 and 2016, and was previously nominated for Golden Ear Vocalist of the Year in 2015. As one-half of vintage jazz duo Sundae + Mr. Goessl, Voss performs and tours nationally with her husband, Golden Ear-nominated guitarist Jason Goessl. She also was a featured vocalist on the 2016 Northwest Recording of the Year, Birch Pereira & the Gin Joints’ Dream Man.

An impressive vocalist, composer, and educator, Jay Clayton has performed and taught across the world. In 1963 she began her career performing the standards on the vibrant New York music scene. However, she quickly became a prominent part of the free jazz movement. She has collaborated with many big names, including: Fred Hersch, Norma Winstone, Bobby McFerrin, Jane Ira Bloom, and Julian Priester, who was honored to induct his “dear friend” into the Hall of Fame.

Clayton is known and respected for her experience with free jazz and improvisation. She has taught extensively throughout the world and was on the jazz faculty of Cornish College for 20 years. She is currently on the jazz faculty at Peabody Institute in Baltimore.

Seattlelites should count themselves lucky to possess an artist of this caliber in their town. Originally hailing from the Emerald City, Anschell was away from Seattle for 25 years. His performance career took off in Atlanta, where his trio played at major festivals, including the 1996 Summer Olympic Games.

Anschell has played with jazz greats including Ron Carter, Benny Golson, and Russell Malone, and is the recipient of numerous Golden Ear Awards. Many of his compositions have appeared on television programs including “The West Wing,” “The Wire,” and the PBS movie The Old Settler.

Jim Knapp, in recognition that his forward-thinking work in jazz education has helped to shape Seattle’s jazz legacy

Former Chair of the Music Department at Cornish and current Program Manager at Centrum Gregg Miller presented a Special Award to Jim Knapp (unfortunately not in attendance), who just celebrated his retirement from Cornish College of the Arts.

Jazz has been taught at Cornish College of the Arts since the 1960s, but came into its own when Knapp “codified the program as we know it now,” in words of tribute Chuck Deardorf. It’s been the better part of 50 years since then, and because of Knapp’s pioneering work, Jazz at Cornish has national stature.

Knapp was for years the program head of Jazz within the Cornish Music Department. Among his awards are a National Endowment for the Arts Jazz Composition Fellowship, a Seattle Arts Commission Individual Artist Music Composition grant, and support from Meet the Composer and Artist Trust. In November 2006, he was honored by Cornish for “35 Years of Jazz.” In 2007, he was inducted into the Earshot Jazz Hall of Fame, and in 2010 received the “Certificate of Excellence in Teaching” for 2009-2010 from Cornish College of the Arts.

Knapp has recorded as a composer and/or performer on the ECM, A-Records, Origin, and Pony Boy record labels.

Julian Priester, in recognition that Seattle’s jazz history is embellished by his distinguished legacy

In a special presentation, trombonist Ryan Keberle, who performed after the ceremony with his Catharsis project, was honored to present Julian Priester with a Special Award.

Earning a standing ovation as he made his way to the stage, Priester took the mic to deliver a message:

“You represent the saviors of jazz music,” he told the crowd after thanking them. “It has been waving in popularity…and I encourage young people to seek out where the music that they love comes from.”

Coming from an artist who’s worked with Sun Ra, John Coltrane, and more, these words are made ever-stronger in light of today’s threat to the arts in America.

Earshot’s John Gilbreath closed the ceremony, after inducting Bill Anschell into the Hall of Fame, with a similar theme:

“We have to identify what our personal values are. We have to articulate them, we all have to stand for our value of our collective culture and the story of America that is told through the jazz culture,” he said. “Jazz belongs to Black America, but there is no doubt that jazz has gone around the world. And what we have in Seattle is a key element to that. We are a spark plug.”

← Earshot Jazz Kicks Off Spring Series Letter from the Director →