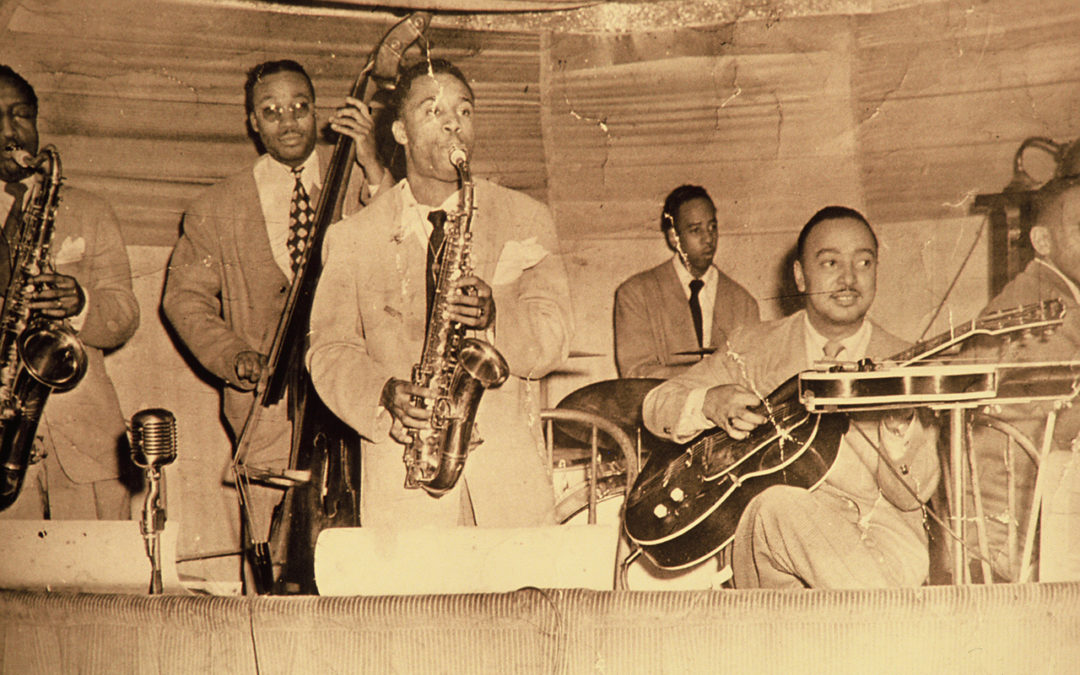 In these times of struggle against systemic racism in America, it’s illuminating to recall that it wasn’t so long ago that Seattle had two musicians’ unions—one for whites, Local 76— and one for everyone else, Local 493. The story of how that came to be and how it ended is an important theme in the history of Seattle jazz.

In his pictorial book, The Blue Note: Seattle’s Black Musicians’ Union, David Keller documents how, under the leadership of brass band man Powell Barnett, Black musicians formed their own union, Local 458, in 1919. Though that organization dissolved, it was succeeded in 1924 by Local 493, which served African American and other non-white musicians for the next 34 years. Though union representation was a stride forward—it helped musicians get work, fair contracts and offered legal protection from dishonest promoters—the trade-off was a system of unofficially segregated “turf.” This meant that the lucrative jobs in downtown hotels, ballrooms and theaters— as well as radio broadcast orchestras— were reserved for whites and that nonwhites were relegated to night clubs in two neighborhood districts—one along Jackson Street, from the Chinatown International District to 14th Avenue South, and the other along three blocks of East Madison Street, from 20th Avenue East to 23rd Avenue East. In the Chinatown-International District there were, among others, the Basin Street and the Black Elks Club, and near the 12th and Jackson hub sat the Black and Tan and the Rocking Chair. Over on Madison, you had the Savoy Ballroom (later called Birdland) and the Washington Social Club. It was in these neighborhood venues that Seattle jazz grew and thrived.

One of the motives behind union segregation was to reserve the best-paying jobs for whites. Ironically, however, according to many musicians I interviewed for my book, Jackson Street After Hours: The Roots of Jazz in Seattle, musicians often made more in tips at after-hours joints than whites earned in theaters and ballrooms. Nevertheless, in 1936 and again in 1950, Local 493 attempted to force the unions to amalgamate, but without success, and pressure grew nationally to undo racial segregation. In 1954, the year the Supreme Court ruled against “separate but equal” public schools in Little Rock, Ark., with Brown vs. the School Board, the American Federation of Musicians got serious about desegregation, too. At a meeting that year in Chicago, Barnett, who had co-founded Local 458 but had always been in favor of one union for all, came back to Seattle with a plan for amalgamation. He was assisted in this endeavor by another musician with strong Seattle ties—pianist Ernie Lewis.

In 1946, Lewis had brought a nimble new sextet from Oakland to Basin Street, with the remarkable alto saxophonist Pony Poindexter and tenor man Vernon “Pops” Buford. Pianist Gerald Wiggins also played in the group when Lewis was away on business. Lewis was an excellent pianist with an ear for the new, once-overlightly Count Basie Seven style that had caught the ear of the modern players. He also had an ear for singers and snapped up the young Ernestine Anderson to sing with his band. A recently discovered photograph of Anderson with the Lewis band at KOL radio studio was probably taken around the time the band was working out at a roadhouse south of town called the China Pheasant, in 1947.

Lewis went back to Oakland, but in 1955 was hired by the American Federation of Musicians to represent all 55 Black locals to help move the merger process forward. From July 1, 1955, through 1986 Lewis accomplished that task, passing through Seattle twice a year. At the local level, two of the main figures involved in hammering out the merger were drummer Emmett Lewis, who in 1954 had become president of Local 493, and the great trad revivalist, pianist Johnny Wittwer, from Local 76. It was probably Wittwer who wrote an unsigned editorial for the December issue of the Local 76 magazine, Musicland, urging members to do the right thing in a tone that resonates today: “Not only can we steal a march on our ‘Frisco friends by desegregating now, we can join in a sweeping nation-wide trend which gives the lie to the white supremacy bilge prevalent throughout much of our ethically decadent and crassly ignorant South…” It took several years for the amalgamation process to unfold, but by 1958, the details were finalized: Local 493 was no more, and non-white musicians were welcomed into Local 76. By the end of the decade, segregation in the AFM had been eliminated. (In 1994, to honor the past, the Seattle local changed its name to Local 76-493).

This did not end discrimination, of course, and many Black musicians felt, at least for a while, that amalgamation actually hurt their careers more than it helped. Tenor saxophonist Jabo Ward observed, “At our own local, they called us. When we went into 76, we got crumbs.” White bassist Chuck Metcalf tended to agree: “Guys like Milton Garred [Ray Charles’ ex-bass player] wouldn’t be hired by white musicians. Or Jabo Ward. The social patterns had already kind of congealed.” Indeed, hotel managers and club owners often resisted integrated groups, as well. Pianist Elmer Gill recalled being asked by the Sorrento Hotel to fire his white guitar player because the venue did not want an integrated band. (Gill refused.)

In the end, however, a new, integrated jazz culture emerged in places like Pete’s Poop Deck, Dave’s Fifth Avenue and, later, the Penthouse, which paved the way for the jazz club culture we know today at Jazz Alley or Egan’s. It’s nevertheless a good reminder that the jazz culture we enjoy today did not just arrive by accident. It was the result of a lot of work by a lot of people, and it’s evident that this work never really ends.