Elnah Jordan: Where She Needs To be 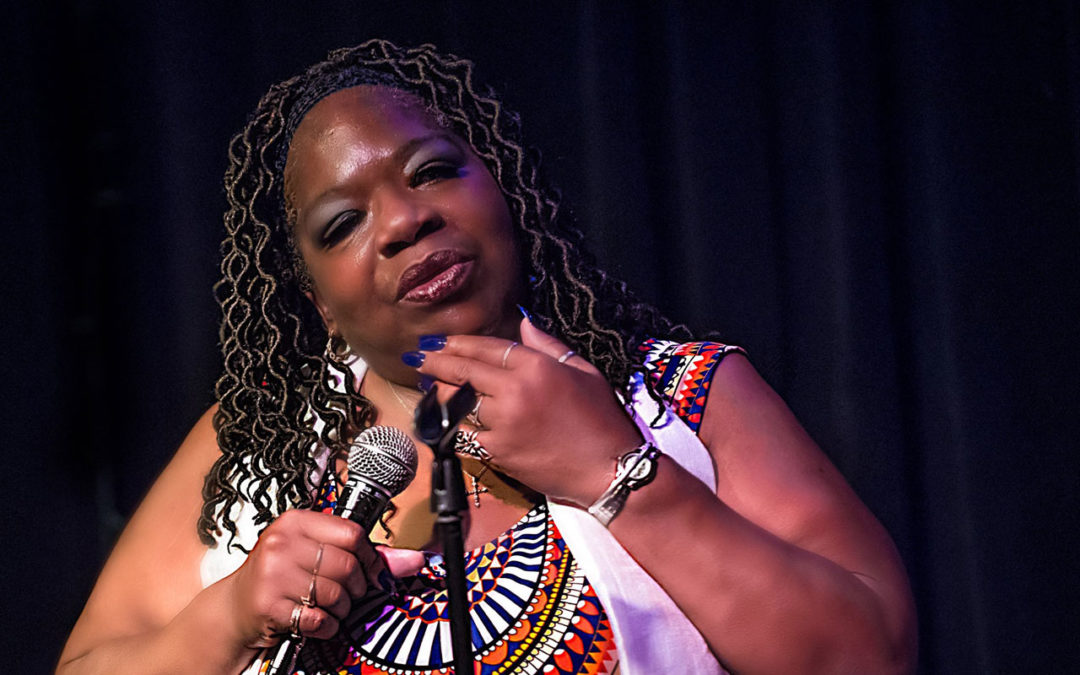 Elnah Jordan is a strong woman who deeply appreciates where she is today. Her journey in life and music has included a multitude of unforeseen highs and lows. She has survived time on the street, serious medical issues, and a devastating twenty-year absence from the thread in her life that carried the most meaning—her music. Before knowing anything about the blues, she gained intimate knowledge of their workings simply by living her own life. Her journey has led her to be a focused artist of great power and humility, whose voice encapsulates the blues/jazz tradition in no uncertain terms. “The universe puts you where you need to be,” she observes.

Jordan’s roots in music date back to her childhood in church, where her mom was the full-time pianist. That immersion in gospel music would become the foundation for her personal sound. Her Seattle-raised family was military and moved around the country, ultimately settling in and around the San Francisco area. Jordan’s formative years were then spent in the Haight-Ashbury and North Beach neighborhoods of the city. She took her music to the street, singing and playing guitar for tips in the Cannery/Fisherman’s Wharf area.

“I ended up being a street musician there. I played guitar and a lot of folk music back then,” she recalls. “I made a lot of money down there doing that, and I don’t really have a problem going back out there, if I have to,” she says in a nod to current times.

Jordan spent some time in theater, receiving the coveted Cabaret Gold Award for her performance in the off-Broadway musical drama, “Street Dreams.” But getting back to her assertion of the universe positioning us where we need to be, she was discovered singing on the street by legendary jazz vocalist Jon Hendricks, and subsequently plucked from obscurity and into the title role of the Bessie Smith-inspired musical, “The Evolution of the Blues.” Jordan’s thunderous voice had caught the ear of Hendricks, the producer of the show’s run in San Francisco. Ironically, she knew little to nothing about the iconic Smith. Her roots in gospel, in church with her mother seated behind the piano, would ultimately give her the tools she needed to succeed.

“That was my very first introduction. I didn’t even know who she was,” recalls Jordan.

Hendricks would take her under his wing, invite her into his home, and guide her for a substantial two-year run. She also met saxophonist Hadley Caliman on the gig, a connection that would take root in the Bay Area and blossom in Seattle a few years later.

“Jon Hendricks picked me up off the street, and I lived with him and his family the whole time I did the show,” she says recalling his kindness.

Jordan would then enter a stage of her life where her music faded away and larger concerns of family would demand most of her time. The stress and hardship that accompanied that period would lead to

memory loss symptoms due to being improperly cross-medicated. Music would go by the wayside for some twenty years. In time, she began to get her medical issues straightened out. Artistically, the best was yet to come. Her musical re-emergence was assisted gracefully by the open arms of the jazz community in Seattle.

“I didn’t sing for twenty years. I thought I was done, and then I started hosting karaoke to get my chops back. I didn’t know anybody in the jazz community, but I refused not to sing, even if I had to use a lyric sheet. I’ve been so blessed since. I met Reggie Goings, and Hadley was here. I’ve met so many great people, I’ve been embraced,” she says.

For the past eleven years, Jordan has performed largely with pianist Eric Verlinde, in both duo and larger band settings. The bond they’ve formed through music has led to a friendship and understanding that is unique and timeless. The depth of Jordan’s soul seems to spill out with each performance, drawing the audience into the fray, with joyous results.

“People think I’m entertaining, but I’m not, I’m purging, and I’m taking you with me,” quips Jordan. “They think they came to see me, but I came to see them.”

No matter in which direction she decides to take her music on a given evening, there is that unshakeable bond with the blues that comes across loud and clear, that shouts from a deep well of spirituality, offering hope and resolution. Her roots, her life, has taken her to this place, where she can be most expressive. Verlinde’s intuitive accompaniment is an agent of release, allowing her to fearlessly go where the moment leads her, knowing the support will be there.

“I used to fight the stereotype of the blues. They see a big, black woman, and they automatically think you sing the blues. I stayed away from it for a while, and then I actually got the blues. Then I understood,” says Jordan.

Verlinde’s role in Jordan’s resurgence goes far beyond his beautiful voicings, his rhythmic drive, and overall mastery of his instrument. He played a prominent role in her recovery and transformation from tough times to her respected place on the vibrant Seattle jazz scene. Music was truly a medium of healing, perhaps helping to explain the intimate connection they share in performance.

“He was so patient with me and my memory loss, just a real calming effect. I trust him totally, in everything we do. We think so much alike. Musically, we can go anywhere, anytime. I know he’s got my back, and he has a great sense of humor. I’ve learned so much from him, and he’s the same age as my son,” she exclaims.

Jordan recently received a 4Culture grant to perform music as a means of healing in senior communities, augmenting skills she already has gained in working with hospice patients. The joy she provides this audience is equaled only by the joy she in turn receives.

“When you can bring them some joy, and see it in their eyes, it’s wonderful,” says Jordan.

No matter where her audience experiences her music, Jordan will continue to draw from the blues/jazz tradition, into the heart of the matter, with no frills or artificial thrills. Just the truth, please.

“I don’t do tricks with my voice. I concentrate on the warmth of it, and blending with other instruments,” she says. “I like to keep it simple, that way it’s pure. If I feel it, they’ll feel it. Then we can get warm and fuzzy together.”