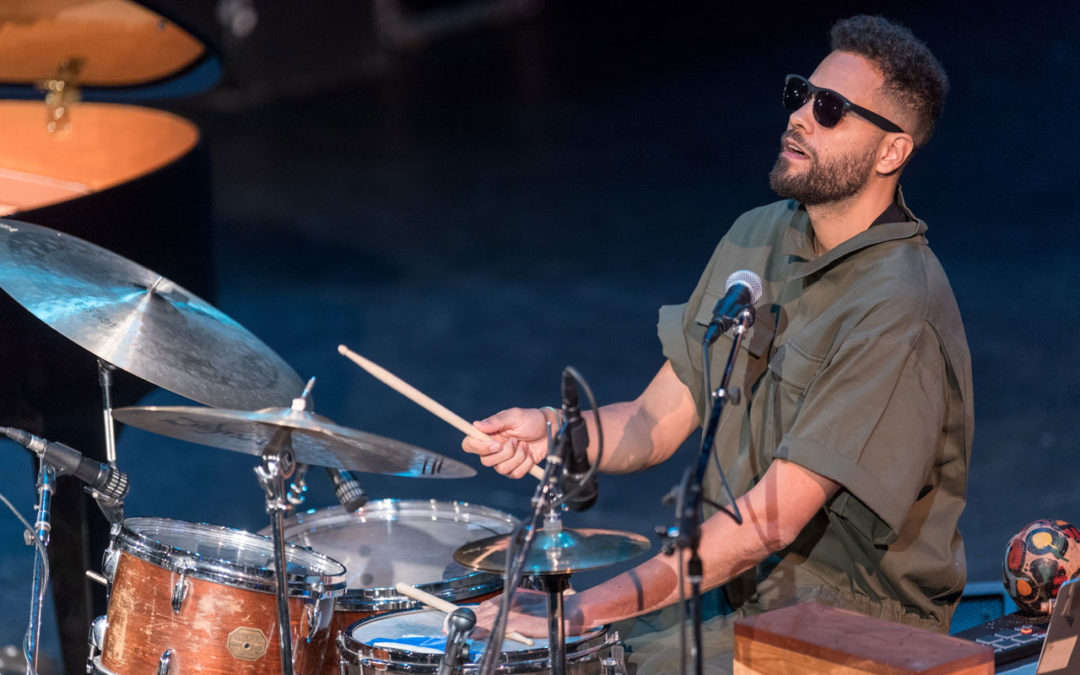 For its eighteenth year, Portland’s annual Biamp PDX Jazz Festival continues with a mix of live performances and real-time web streams. Though state rules to slow the spread of COVID-19 have canceled some performances and postponed others, the festival will take place with limited in-person capacity at a newly overhauled Jack London Revue, where it will be broadcast online, February 18 to 27. Featuring a selection of films, premieres from Northwest artists, and a debut of commissioned work, the festival’s sure to give audiences a chance to listen to music truly of this moment.

Streamed for free on the web, an opening night celebration kicks off the festival on February 18. The celebration features a cabaret performance from Northwest cosmopolitans Pink Martini, featuring Thomas Lauderdale and China Forbes. The songwriting team behind the popular group, Lauderdale and Forbes have led the group’s global sound since writing the surprise hit album Sympathique, released in 1997.

February 19, the multifaceted trumpeter Cyrus Nabipoor leads a group off his latest release and debut as a bandleader, Live at the Marigny Opera House, a “quietly revealing debut with a keen sense of smoldering tradition and youthful investigation” (All About Jazz). The same day, pianist and composer Harold López-Nussa will broadcast directly from Havana, Cuba. His latest album, Te Lo Dije, mixes his straight-ahead jazz with contemporary sounds from the island from the likes of Afro-Cuban superstar Cimafunk and reggaeton vocalist Randy Malcolm.

A former protégé of Prince and collaborator with John Legend, vocalist Judith Hill will perform February 20. Hill has backed artists like Stevie Wonder and Michael Jackson, and has a new album due this year. Oregon gospel singers Saeeda Wright, Alonzo Chadwick, and Arietta Ward follow on February 21, for what’s sure to be a powerful performance.

February 24, the festival will debut its newest education program, “The American Refrain: Jazz and Modern Music,” an hour-long performance arranged by Noah Simpson, which narrates the formation of jazz and its current role in popular music. Bassist Marcus Shelby will also celebrate the history of Black music with his quartet, featuring Tiffany Austin, Darrell Grant, and Carlton Jackson, February 26.

Seattle favorites appear throughout the festival—Ted Poor and Cuong Vu perform on February 25. Showcasing jazz’s brave new world, Wayne Horvitz will lead his Royal We ensemble, currently a sextet featuring Skerik (sax), Alex Guy (violin), Geoff Harper (bass), Iván Galvez (percussion) and Andy Roth (drums), on February 27th. Also, on the same day take a look behind the scenes as Kassa Overall crafts his signature sound in his lab at a “Beats Workshop” in Brooklyn, followed by a Q & A with Giovanni Russonello.

For a grand finale, February 26 and 27, South Africa’s freshest musical talent will stream live from Johannesburg, to showcase music recorded for a new compilation celebrating South African improvised music, Indaba Is, to be released 2021. These artists include the performance art ensemble the Brother Moves On, genre-defying guitarist Sibusile Xaba, and others, sure to be festival highlights.

Changes to ticketing and attendance this year include the ability to view most concerts virtually, with the option of viewing some of the concerts in person at the Jack London Revue, in downtown Portland. Shows will be available to view for 48 hours and films will be available for 72 hours. PDX Jazz Members watch all concerts online for free, while non-members can buy livestream tickets for as low as $5 per show. For details visit pdxjazz.com.