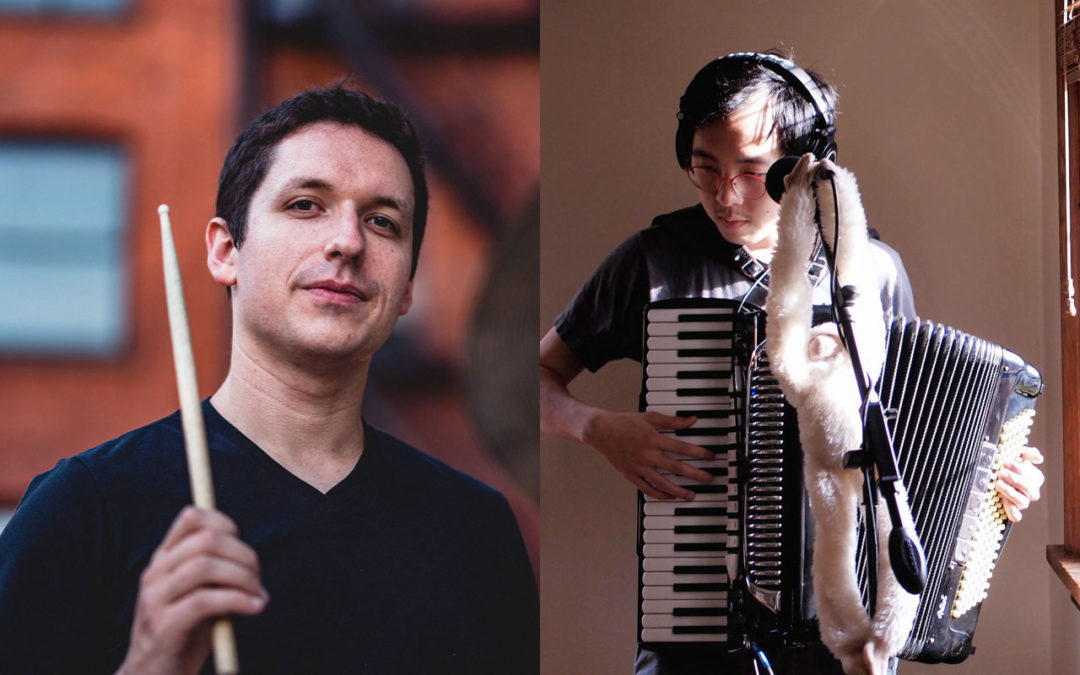 This story begins as all good stories do: with a teenager studying Latin percussion in Kuala Lumpur. The teenager was Josh Hou, whose podcast with Max Holmberg is Jazztalk Seattle, a monthly podcast on SoundCloud where they talk about Seattle’s jazz scene with local musicians. But, back to Kuala Lumpur. “My percussion teacher was playing a gig in a smoky bar where he brought in a full band to play a tribute to Mongo Santamaría…I needed to play like that.” Play, he did and does—both accordion and keyboards.

For Holmberg, his love of jazz began during childhood: his mom would play Count Basie’s music a lot. “My mom was a pianist and singer and encouraged me to get into playing music.” Play, he did and does—drums and percussion.

Their musical backgrounds, and their enjoyment of listening to jazz (for Hou his first jazz albums were Dave Brubeck and Eddie Palmieri; for Holmberg it was the likes of Oscar Peterson and Papa Jo Jones), led the two to think that, perhaps, they could talk about what they loved and what they were already immersed in: Seattle’s jazz community.

“We started out talking about records,” Hou says. The podcast is a few years in now. “We were listening to records and even discussed things that we were practicing. Pretty soon we transitioned to inviting guests on to talk about their projects and recently released records.” Recent guests to Jazztalk Seattle have included Alex Dugdale, Jacqueline Tabor, Max Walker, Frank Vitolo, and many others. “I really love to be able to dig deep,” Hou says of the podcast. “It’s nice to find out what other musicians are up to, what inspires them.”

Both Hou and Holmberg are inspired by Seattle’s local scene. “Jazz musicians in Seattle tend to be open-minded in their approach to jazz,” notes Holmberg. “This has given birth to a thriving avante-garde scene.” Hou concurs: “A lot of musicians are happy to play in various musical contexts, which leads to some interesting genre-bending projects.”

Alas, much of these projects are in quarantine with COVID still raging. Audiences are part of Zoom calls and Facebook live events. Both podcasters miss the live aspects of shows and miss the places in Seattle that showcase jazz talent, like Angry Beaver, Capitol Cider, and Owl & Thistle that have regular jam sessions. Holmberg says, “I like that there are many different venues, each with their own crowd and vibe.” One might play Count Basie classics. Another might play music heard in smoky bars in Kuala Lumpur. All of this cross-pollination, genre-bending, and world-expanding has been taking place in Seattle, and championed on the Jazztalk Seattle podcast.

Though they’ve been at it for some time, there’s so much more they want to do.

For example, Hou would love to interview accordionists he admires, like Richard Galliano and Toninho Ferragutti. For Holmberg, it would be jazz legends like Keith Jarrett, Pat Metheny, and Kenny G. “They have each strongly approached their music in their own way.”

COVID continues but, perhaps, there’s a finish line on the horizon. Vaccines are beginning to be rolled out. Both Hou and Holmberg are excited about rolling out new episodes (Kate Voss and Jason Goessl episodes are out now). And, also, celebrating the diverse landscape of Seattle jazz. –Jonathan Shipley