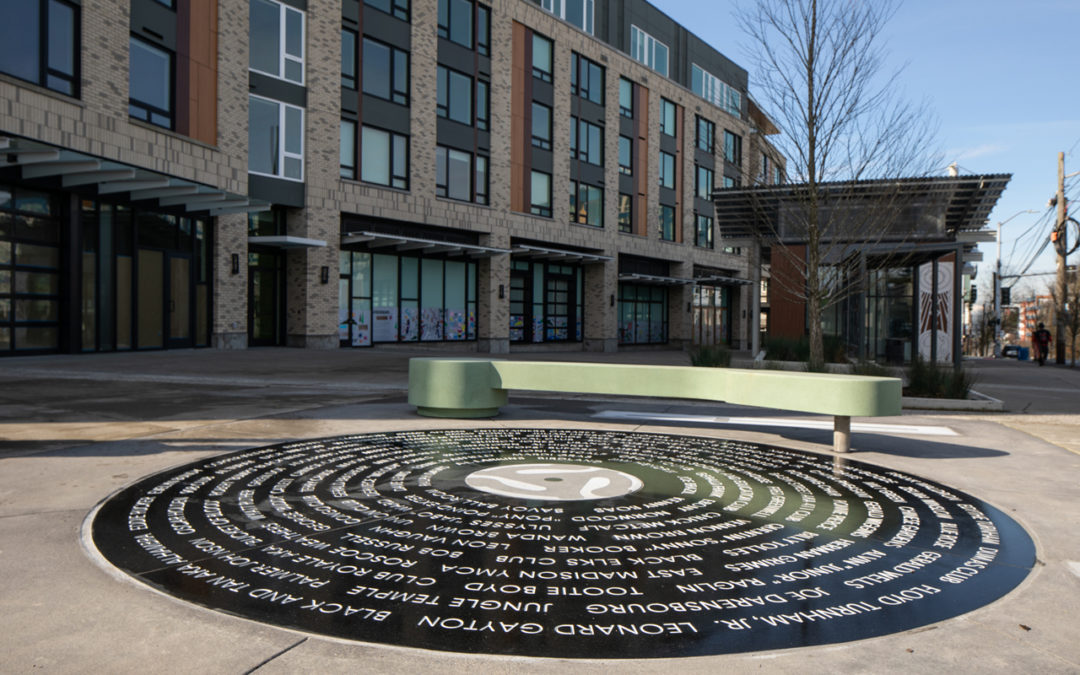 The Central District is often acknowledged as a historically Black neighborhood. And, to a degree this is true. The Central District was also known for its thriving Jewish and Asian communities, and before that, as we know, the lands originally belonged to the Duwamish peoples. Yet, over time, as the tech industry boomed, it meant that through economic violence those same communities were pushed out of the neighborhoods they had called home for generations. However, what has survived despite these acts is a small, but mighty, community that still advocates for the preservation of its history and maintaining Black presence in this legendary neighborhood. One of those advocates is Paul Rucker.

In 1998, South Carolina-raised composer, musician, and visual artist, Paul Rucker, moved to Seattle where he first settled in the Central District. In 2019, his building was sold and Rucker moved his studio to White Center after 19 years on Jackson Street. His artistic practice is devoted to investigating community impacts, human rights issues, historical research, and basic human emotions. “As a self-proclaimed civilized society, we need to understand that economic violence is the most socially acceptable form of racism,” says Rucker.

Between 1900–1980 segregation and the redlining of Seattle restricted and separated communities, but despite that, Jackson Street was one of the few spaces that those barriers seemed to melt away. It saw the comingling of people from all communities. Rucker seeks to disrupt the Eurocentric standard that for so long has controlled the narrative for what is and isn’t seemingly important enough to discuss, remember, and honor. The intentionality behind his work makes it more than just a visual piece to be admired for a fleeting moment. It is an invitation for all, whether you grew up here or not, to dig deeper into the history of this neighborhood.

So now, let’s take a journey up Jackson Street. Board the #7 or the streetcar that will take you part of the way up the long, steep street. There, at 23rd & Jackson, you will find a 12-foot-wide granite 78rpm record and turntable embedded into the concrete plaza of the Jackson Apartments. 78 is a public art piece dedicated to the legacy of the 70 artists and 32 venues that once existed along Jackson Street. Rucker was especially intent on honoring the lesser-known performers that were still vital contributors to the city’s jazz scene. Next, take a seat on the 2,800-pound tonearm bench or stand in the center of the record. Pause for a moment, let the world around you slow, and witness each name that is etched into the ground (or, the grooves of the record).

Rucker’s piece was the last to be installed at the Jackson Apartments, which are owned by Vulcan Real Estate. Now, 78 sits proudly among the other publicly accessible works by the additional artists commissioned by Vulcan, including Yadesa Zewge Bojia, Marita Dingus, Esther Ervin, Ari Glass, Aramis 0. Hamer, Preston Hampton, Elisheba Johnson, Ashby Reed, and Xavier Roache. The website 78onJackson.com includes an interactive image of the art piece that expands on each name in 78 along with an artist talk. The research for the project was assisted by Paul de Barros, a historian, journalist, and legend in his own right who brought this story to the public’s attention in the 1990s, with his book, Jackson Street After Hours. Rucker’s current exhibition, FOREVER, is also on view at the Bainbridge Island Museum of Art through June 15. To learn more about Paul Rucker visit his website at paulrucker.com or keep up with him on social media.
–Rayna Mathis

Paul Rucker’s FOREVER series is now on display at the Bainbridge Museum of Art. Inspired by the Forever stamps produced by the United States Postal Service, Rucker created the series to acknowledge and memorialize civil rights martyrs who have not and might not appear on U.S. postage stamps. One of the subjects of Rucker’s work in this series is Edwin T. Pratt, a civil rights leader from the South who moved to Seattle and was the head of the Seattle Urban League until he was murdered at his home in 1969. Rucker also explores the lives of Carole Robertson, Addie Mae Collins, Cynthia Wesley, and Denise McNair—the four girls who were murdered at the 16th Street Baptist Church bombings in Alabama in 1963. The FOREVER series is available to explore until June 15. Visit biartmuseum.org for details.