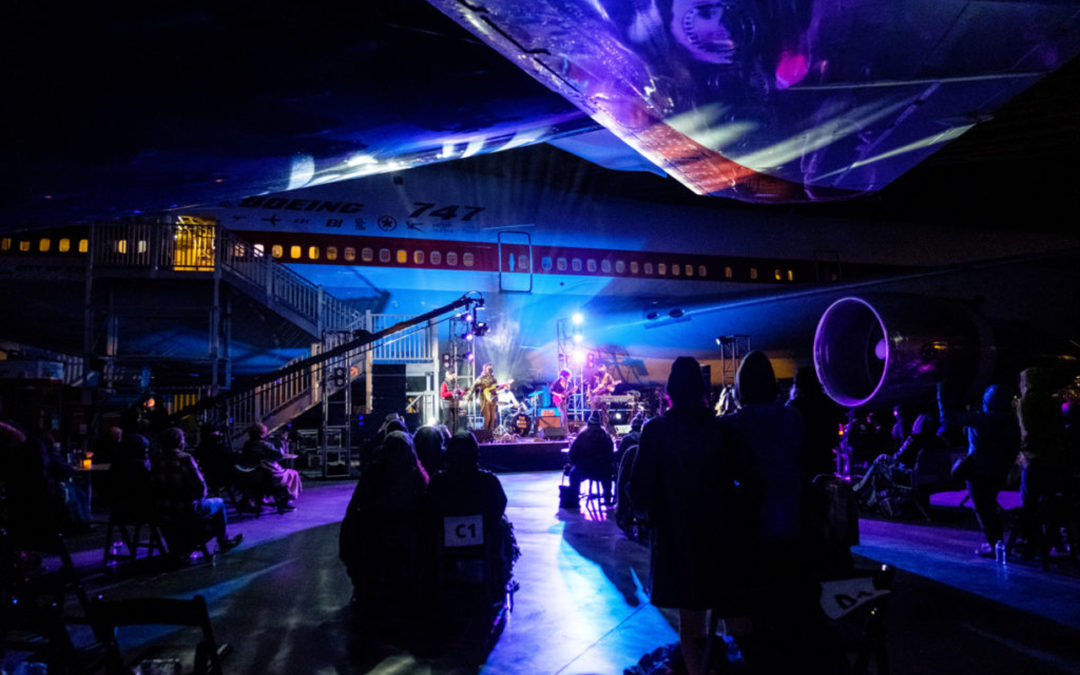 Safe & Sound Concert at The Museum of Flight. Photo by Danny Ngan.

Loss. That was something that happened to Jonathan Evergreen when the pandemic hit. He lost his job. And, as a freelance musician, he lost the chances to make music in front of audiences, too. Loss.

“I lost all my jobs,” says Evergreen. “Isolation set in. Panic set in. What was I going to do?” He didn’t know until he did.

What does any of this have to do with Seattle’s music scene that was devastated by the pandemic? “We became experts in COVID safety, PPE, and preparedness,” says Evergreen. “It just made sense for us to pivot to the arts.” Their thoughts, having worked with the medical community: If medicine prolongs life, the arts give reason to prolong it. With that, Safe & Sound Seattle came to fruition.

“We bring everything together,” says Evergreen of the organization, “so people can come together to enjoy live music again safely.” Working with local venues, artists, event workers, and vendors, they host events using COVID-compliant, data-driven procedures in order to keep venues open and give locals what they’ve lost during the pandemic: the ability to go to a live show and hear musicians play the music they love.

“It’s been amazing seeing the community come together,” says Evergreen. “To see everyone working toward a common goal. It’s been inspiring.” There have not been very many silver linings for most anyone during COVID, but silver has shined bright for Evergreen and his team. Seattle’s first live music event since the shutdown was at the Museum of Flight’s outdoor Aviation Pavilion in late March. The Black Tones and Payge Turner played in front of audience members, safely.

Numerous safety measures were employed. Masks were required. There was social-distancing of eight feet between pods, with each pod seating up to four people. There were contactless QR codes for merchandise and donations. The staff were trained in safety procedures and COVID protocols. There was safety at the concert, yes, but, also, so much more. There was catharsis. says Evergreen, “It was healing. The response from the audience. There was crying.” It felt good, put simply. It was a night of music that wouldn’t have happened without Safe & Sound’s expertise on such matters.

Their next concert was on May 29 at the same Museum of Flight location. The Marshall Law Band performed with special guest Tres Leches. The concert is part of Cleared for Takeoff, Seattle’s first socially-distanced outdoor concert series (for 21+). It’s appropriate that it’s taking place at the Museum of Flight given what Evergreen says about working at Safe & Sound during the pandemic. “We are building the plane while we’re flying it.” COVID has created unique problems. Evergreen and his team have become unique problem solvers.

Where the organization hopes to land is a post-COVID world is where Seattle’s vibrant music scene comes to full flourish. There is great hope for that within the organization and they’re eager to contribute whatever they can to meet that end. “What would Seattle be without music?” he asks. “It’s what ties us together.” It’s what ties a venue owner to a band; a band to a sound engineer; a sound engineer to a T-shirt maker; a T-shirt maker to a music fan. “Music is the oldest language in the world. It brings us together.” To bring people together safely is Safe & Sound’s mission. They’re currently working on future shows. It’s part of their story but it’s not their story alone. As Evergreen says, “It’s a story being written and it’s for everyone to write.”

Yes, a story and a song, and everyone can contribute a verse.