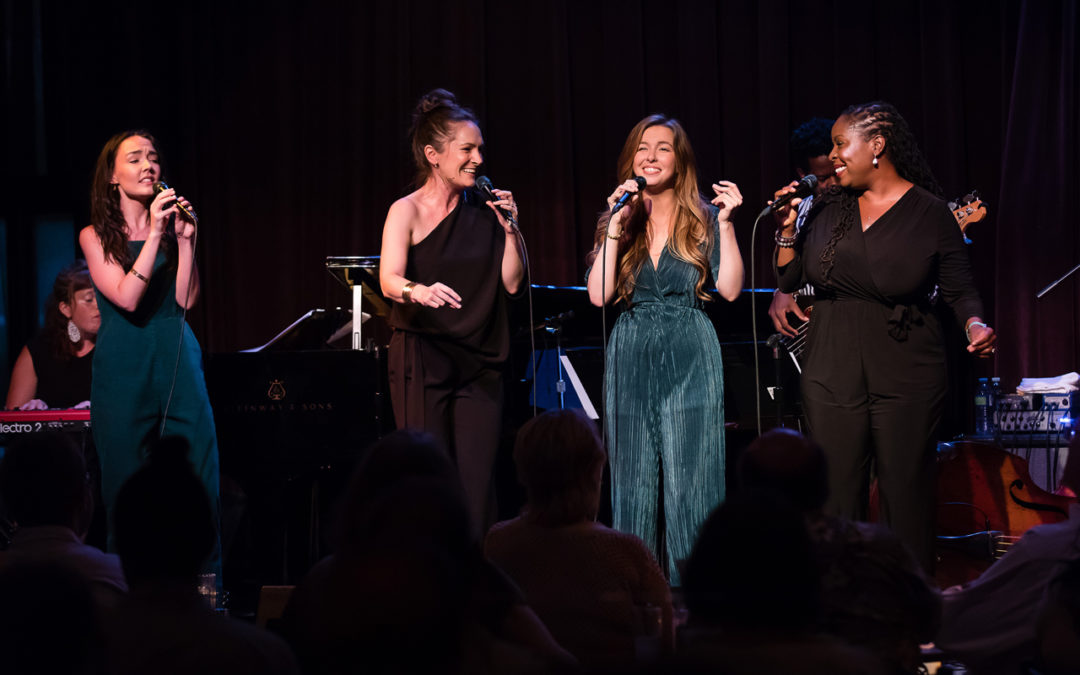 The two night stand of the jazz vocal supergroup säje at Jazz Alley represented a series of firsts for all those fortunate enough to be present. For the club and patrons, the sold out house represented a sense of normalcy for the first time since the COVID-19 shutdown. For säje, it marked the first time performing together before a live audience. The worldwide pandemic hit just as the vocal quartet was blossoming into a worldwide phenomena, an identity held together over the shutdown digitally, and finally in isolation in the Seattle area.

In jazz circles, the known quantities of säje are celebrated Seattle-born and raised vocalist Sara Gazarek and highly acclaimed Seattle vocalist and composer Johnaye Kendrick. They are joined by arrangement superstars Amanda Taylor and Erin Bentlage, whose dynamic voices also add to the highly original sound of this groundbreaking quartet. Add pianist Dawn Clement, bassist Ben Williams, and drummer Kendrick Scott to the mix, and the potential for greatness becomes clear. For the most part, the quality of sublime greatness was achieved during this opening performance.

The set opened with Bentlage’s arrangement of Kendrick’s “Scorpion,” featuring groove-based harmonies and Clement’s riveting solo on both piano and Nord keyboard. The sight of five strong women performing together onstage was a powerful image not seen often enough. Their vocal artistry, melodic prose, and instrumental prowess were dynamically expressed with each selection, whether it be a group original such as the Grammy nominated “Desert Song,” or inventive interpretations of the country classics “Ring of Fire” and “Jolene.” Williams’ bass solo on the former (a June Carter composition made famous by Johnny Cash) and the intricate work of Scott on the drum kit, provided a jazz rich canvas to receive the wide ranging, off-the-grid brilliance of the group’s four part harmonies.

The most powerful moments of the evening took place during Kendrick’s strong and focused performance of her piece, “Never You Mind.” The stirring narrative speaks to the struggle of Black Americans in the fight for social justice. At the end of the song, Kendrick solemnly names a list too long of Black men and women whose lives were taken far too soon while the remaining trio chants, “You matter,” a nod to the Black Lives Matter movement. The song ends suddenly and dramatically, driving the narrative home in no uncertain terms.

Throughout the evening, the dynamic range, perfect pitch, and emotive lyricism displayed fearlessly by the foursome was evident. The spirited, powerful arrangements were precisely engaged without being forced. The music could have just as easily been performed by brass and woodwinds, the vocal and arrangement approach expressing a poetic unraveling of melody and harmonic deference. There were a few loose ends as one might expect on a first gig, with the house sound dynamics slighted heavily towards the vocal end, and the backing trio having to pull together on the spot. In the end, the audience was awarded a fine performance, with säje as the recipient of the love and support only a home audience can supply.

The Seattle debut of säje is step one of what is sure to become a long term sojourn of artistic excellence. We were fortunate enough to be early passengers on that ride, if not for one evening.