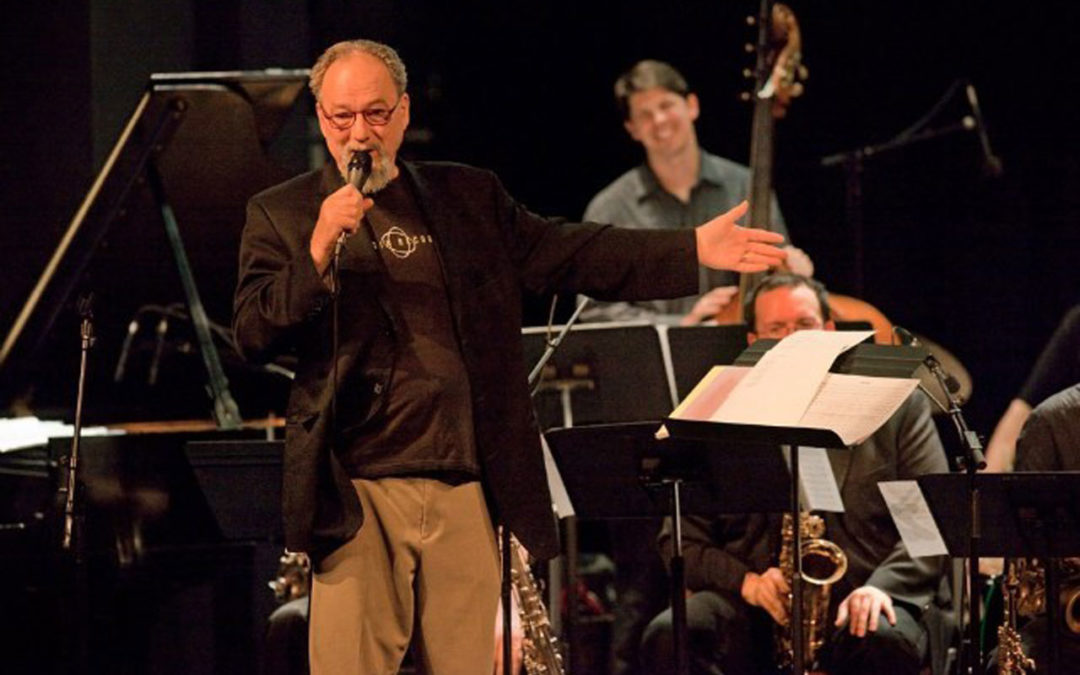 What can I say about Jim Knapp?

I met Jim when I was still in high school, when he taught music theory at a summer workshop Don Lanphere put together. Jim taught some really heavy modal theory concepts in a way that kind of sort of made sense to a small roomful of aspiring jazzers, which in all seriousness I’m still trying to find ways to put into practice. Despite Jim’s concerted efforts I didn’t end up going to Cornish to study with him, but I hung around there a bit during that period and caught a lot of life-changing music—Jim, Jay Clayton, Denny Goodhew, Julian Priester, Jerry Granelli—playing some of the most exciting music I had ever heard.

When I returned to Seattle after a couple of years back east, Jim roped me into playing in his big band at Cornish, which I did for a couple of years. That was like going to school all over again, getting inside the middle of his utterly unique voicings and contrapuntal ideas. I started writing for my own big band right around that time, and while I never took formal lessons with Jim, he was incredibly generous with his time, sitting with me going over scores, noticing little voicing and orchestration details, helping me develop ideas, and even letting me use the Cornish band as a little laboratory.

When I put my own big band together and we started our long monthly run at Patti Summers’ Place, Jim was often there listening attentively. The single best compliment I have ever received was after playing my arrangement of Elvis Costello and Burt Bacharach’s Painted from Memory, when Jim said “I wish I had written that.” I still cherish that.

Jim is best known as a big band composer and arranger, but not nearly well-enough known [for] his command of harmony and counterpoint, his melodic sense, his humor, his ability to move effortlessly between styles, the way he creates little textural worlds for his soloists to create in.

Godspeed Jim. I can’t thank you enough for everything you gave all of us.

Of all the many things I do financially and spiritually the Jim Knapp Orchestra is at the top of my list. Jim Knapp or James Knapp (as he is also known) is a writer with very few peers…He is as good as it gets in my opinion. Jim’s writing has so many unusual colors and textures there are many treats for the ear tucked away in all of his arrangements.  For a serious player it is a lot of fun to play his music because it demands near perfect tuning and dynamics and the lines are sometimes really a challenge and so are the rhythms. To be engaged on so many levels at once is actually what it’s all about. There is also the unquantifiable aspect to Jim’s music that is really the most important, and that is the passion and humor and pathos; all the emotional stuff that has made music so important to me.

Jim Knapp is a very good trumpet player; actually, I would say more than good. But most know him from his composing and arranging.

The thing is, the Jim Knapp Orchestra was in the wrong city for making a big splash on the jazz scene. But it was a strong group with highly developed arranging of the first order. There is only one Jim Knapp. Jim has a theory book with his take on harmony, and many people smarter than I have embraced it. I know Seattle is known for Nirvana and Soundgarden and Pearl Jam, but the real artistic giant, Jim Knapp, has been a well-guarded secret.

Oh well, Van Gogh only sold one painting in his lifetime!

Like so many of my FB friends, I was very sad to hear of Jim Knapp’s passing. A person’s current state in life is the result of the sum total of their experiences, along with their own “wiring”. Jim Knapp was a huge part of my own awakening as a jazz composer/arranger. As a high school student I had written a few big band charts. When I heard the University of Illinois Jazz Band at the Collegiate Jazz Festival—1967, I think—I was blown away, and decided that I wanted to go to school there. A major part of being blown away was a piece called “They Just”, written by one Jim Knapp.

I entered the U. of I. in the fall of ’67 and Jim was still there, in the doctoral program. I got to know him over the next couple of years. He was writing beautiful music for the big band there. They would divide the brass into two sections, the “mellow brass” (2 Flügelhorns, baritone horn, French horn, tuba) on one side, and the “brilliant brass” (2 trumpets, 2 trombones) on the other side, with the rhythm section in the middle. Jim could get stereo back-and-forth between the two sections. I’d never heard anything like this before. I got to know Jim better when we were both members of the U. of I. Jazz Band on our 6-week tour of the Soviet Union in 1969. He was such a lyrical, thoughtful player. Nothing superfluous, no extraneous crap. I believed every note.

Jim finished his degree and ended up in Seattle, teaching at the Cornish Institute. We stayed in touch a little. In ’81 I joined Stan Getz’s quartet. So, I had a bit of a reputation, and in ’83 Jim brought me out to Seattle as a guest with his Composers and Improvisors Orchestra. I’d written a few arrangements but was, typically, behind schedule. I remember sitting up with Jim most of the night before the first rehearsal, with him helping me copy parts. I was stressed, he was cool.

I met up with him one time when he was in residence in Berlin. His 13-piece orchestra played at the International Association for Jazz Education convention one year. It was absolutely stunning. The writing, the blend and balance were perfect. Duly humbled, McNeely crawled back to the drawing board.

I knew that Jim’s health had deteriorated. We spoke on the phone a few times in the last year. Most recently about a month ago. He seemed in good spirits. Joan had passed away not long before, so I knew that he must have been grieving. But we had a good conversation, all hopeful about the future. That’s all you can do, I guess.

One of the times he’d come down to the Vanguard, I introduced him to another member of the Vanguard Jazz Orchestra as, “This is Jim Knapp. He is the first mother****r I ever met.” And I meant that nasty word in the best possible way. Brilliant musician, great teacher, and a humble, sweet, generous man. Rest in peace, dear friend.

Jim Knapp was a real sweetheart. His warm temperament and his tone as a person and lifetime of contribution to Jazz education earned him a position as a brand name in the PNW.  He is one of the distinct common threads that connected local players through multiple generations. It’s not easy to sustain that level of productivity, to stay so inspired to create and to contribute consistently, is driven by pure passion. He will remain a benchmark and an inspiration to players of all ages. Not many people find their niche in life the way he did. It’s remarkable.

I remember taking some lessons from him when I was really young. He broke down some ideas in a really easy to digest way; he was just easy going and genuinely engaged in a way that was honest and real.

May his memory and legacy be a blessing.