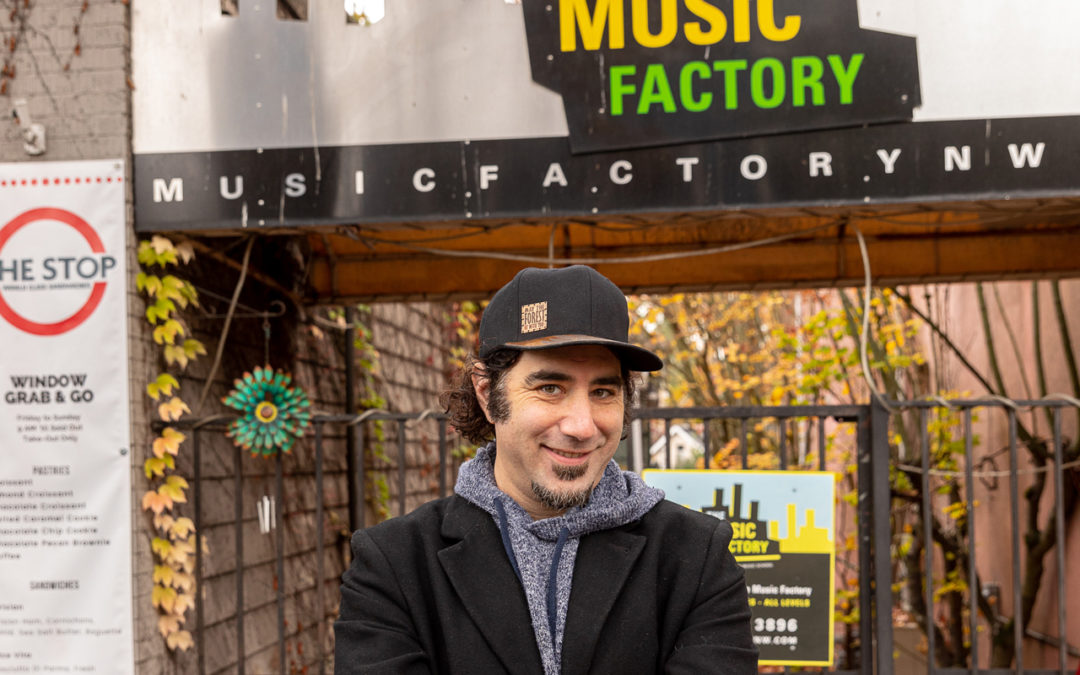 He isn’t Superman. Or, maybe, he is in his own way. “I want to make as big of an impact as I can while I’m here on Earth,” says Seattle musician and music educator, Ari Joshua. Maybe that’s not by being faster than a speeding bullet or leaping over buildings in a single bound, but maybe there is a mighty S hidden on Joshua’s chest. “I want to make the world a better place. I want to share the joys that I have that have made my life worth living.” Joshua does that every day through playing music and teaching others to play through the Music Factory, a music school he founded in Seattle over a decade ago. “I want everyone to appreciate music. It is super rewarding.”

The Music Factory, in Madison Park, has given over 40,000 lessons. With a staff of about a dozen, they have 75 to 200 students a week. Those students are learning all sorts of instruments. From guitar (Joshua’s primary instrument) to piano, winds to strings; Joshua is eager, and wholly committed, to bringing music to the masses. “I want every child,” he says, then stops himself. “I want everyone to take a music lesson. And I want music teachers to make enough money teaching music.” He continues to build and expand on that promise with the school.

It’s important for kids to have someone in their lives who can interact with them on a 1-on-1 level, consistently. Someone who isn’t a family member or a teacher at their school. 1-on-1 lessons help them work through problems, help them with growth and the challenges they face as they grow…Music lessons help them relate to the world.

Joshua began relating to the world through music at an early age. Born in South Africa, he grew up in Seattle surrounded by the music of the local synagogue. His grandfather was a rabbi and services were replete with music, which Joshua often partook in. “I would sing and sing and sing.” Music was already being etched into his heart.

“I would take the 71 bus down the Ave to Cellophane Square and other record shops,” he recalls. He’d load up on all of the discount records in the 99 cent boxes lining the floors, or outside on the record store stoop. “It was a lot of jazz fusion stuff that no one was into.” He was, though. He was into it.

Listening to those records and the blues led him, inevitably, to Seattle’s own Jimi Hendrix. He was obsessed; listening to Hendrix albums and doing his best to play along with a guitar given to him by a neighbor up the street. Joshua continued working on playing the blues, not thinking all that much about playing jazz.

Then, one day, he wandered down the halls of his high school, bike and helmet in hand, when he heard some beautiful music emanating from one of the classrooms. He entered, bewildered and amazed. “What IS this?!” he asked. It was the Roosevelt High School Jazz Band. “It changed my life.”

Playing Basie and Ellington under the direction of some of the greatest music teachers Seattle had to offer, he bloomed as a musician. “It was off to the races for me,” he says. It would be a life dedicated to music.

After receiving a scholarship, Joshua moved to New York to study at the New School and the Mason Gross School of the Arts, an arts conservatory at Rutgers University. He learned just as much about playing music as he did about how best to teach it. Jazz, he feels, is a language. “If you can unlock it, you can bring it into any kind of music.”

“I’ve never had a job,” he says, “except in the music industry my entire life.” Joshua began giving private lessons as a teenager at Roosevelt High School. Taking on students would later help finance his way through college. “I’ve taught thousands of music lessons to people of all ages, styles, and skill levels.”

Like other businesses, the pandemic made him pivot and evolve. One of the silver linings was the online aspect. Although it’s often ideal to be in the same room as a student when playing the piano or the trombone, shifting to online classes helped expand his reach. “To be able to teach, to more people in more places, was exciting.” Instead of having students come to him inMadison Park, Joshua and his pool of instructors were delighted to be able to go to them.

Let us not forget that aside from music education, he is an unstoppable force at making music. He’s played with such diverse acts as Kenny Barron and Sir Mix-A-Lot; Peter Buck and Jimmy Cobb; Stone Gossard and Hal Galper. Joshua is the founding member of the band Big High, and he’s been associated with such acts as AriSawkaDoria, Hathead, Swampdweller, and others.

Emerging from the pandemic, he’s quite excited about showcasing his most recent musical efforts. In November, he released a new EP featuring Ray Paczkwoski and Russ Lawton from the Trey Anastasio Band. The EP was recorded in Burlington, Vermont by long-time Phish engineer Ben Collette. It was a bit of a dream for Joshua, having been a Phish fan for a very long time. His releases include work by such notables as Chava Mirel, Joel Bean, Grant Schraff, Jonti Simon, and others. Joshua’s vault also includes work with Kevin Sawka, Joe Doria, Marco Benevento, Joe Russo, Robert Glasper, and Jason Fraticelli.

← New Faces for a New Year