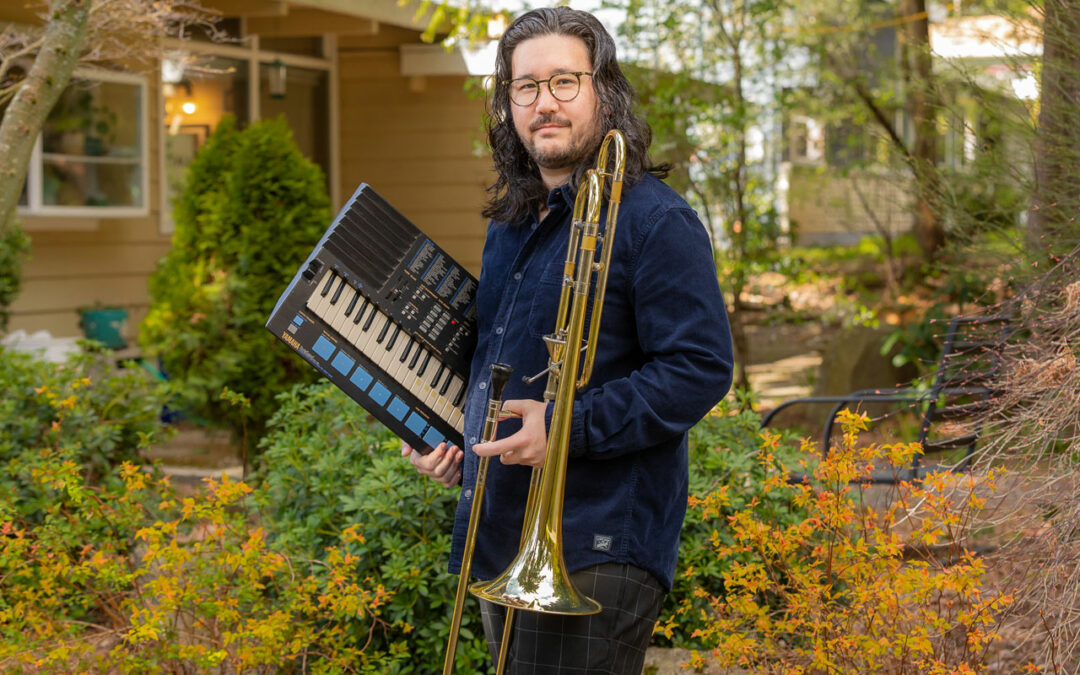 Putting your finger on the musical identity of trombonist/composer Greg Kramer is a lot simpler than one might imagine. As a trombonist, you have likely not seen him in prominent jazz combos around town or witnessed him as a bandleader in standard jazz settings. His immersion into the local music scene has been more experienced through his work with the horn heavy soul ensemble, The True Loves. Reaching back a little further, his time in the hip-hop world performing with Macklemore and Ryan Lewis was highly visible, yet still not providing a focus as to where his artistry lies. In essence, Kramer has found a significant portion of his creative identity with the everyday tools of his life aside from the trombone: a laptop, a microphone, and a push from the hip-hop culture evolving around him in his North Seattle neighborhood, and on the campus of Garfield High School, where jazz first became a prioritized part of his life.

Kramer grew as a musician under the firm grasp of Clarence Acox within the often ballyhooed jazz program at Garfield. Indeed, his experience as a contributing member of that ensemble took him to Lincoln Center in New York three times, twice walking away with first place in the esteemed Essentially Ellington competition. His bandmates included saxophonist Roxy Coss and trumpeter Owuor Arunga, who would be an important influence on his engagement with the hip-hop world. His understanding of how jazz composition works was keenly honed. More importantly, his love for big band music, or more specifically, the layers of sound that join to create “that sound,” was discovered. Kramer was a thoughtful young man with a talent for detail, playing an instrument with a large sound that belied his introspective nature.

After Garfield, Kramer pursued a degree in bioengineering at Case Western Reserve University in Cleveland, Ohio until ultimately completing his work at the University of Washington. He then proceeded to dive head first into the crossroads of the Seattle music scene. His path would take him on the road with Macklemore and Ryan Lewis, playing stadium gigs and sessions that resulted in hit records. He began to play with the True Loves, benefiting from the eclectic approach of saxophonist Skerik. There, his compositional prowess had an opportunity to grow in a pure, organic sense with live musicians.

Kramer has been able to take the ideas he produced electronically in a small home studio and apply them to living musicians with musical personalities of their own, guided by the big band principles he acquired under the baton of Acox. His music, derived from the hip-hop culture of his youth and refined by the Seattle soul music scene, bears the marks of Count Basie, Billy Strayhorn, and Sal Nistico in terms of construct, as much as the hip-hop and funk grooves that reside alongside them, literally, in harmony. Kramer was able to contribute both as a composer and musician in a collective sense, something fitting his personality extremely well. Time spent introspectively in the studio stacking sounds of his own now had input and engagement with other voices, ultimately resulting in prodigious growth.

Whether listening to his work with the True Loves, or his debut EP, Tell Me, Kramer’s priorities are clearly defined by creating strong melodies. Tell Me was a significant mile marker for Kramer, summarizing his life in music to that point in no uncertain terms. “My first solo music release, the product of many years of growth, an evolution of the music I wanted to make,” is how he describes it. While drawing from hip-hop beats born in the R&B tradition, his attention to melodic strength is more Count Basie in nature. With the True Loves employing two trombones and no trumpet, the instrument comes front and center with its powerful, fat sound. The nature of the instrument demands longer, stronger tones as opposed to what one might expect from a more traditional trumpet/saxophone front line in the bebop tradition. “For me, melody is extremely important. That’s a huge focus of my music—trying to find really strong melodies that speak to me. Very often the best ideas, the best melodies will come to me just sitting around improvising over the chord changes,” says Kramer. That attention to melody is applied to his approach as an improviser as well. “The more I lean into that side of things, the better my improv is,” he remarks.

As a composer, the world seemingly opened up for him. It broke things down as to be able to clearly see where his inspiration resided, and what it spoke to in terms of the future. His foundational roots were firmly entrenched in large ensemble jazz. “Jazz is the basis of all the music I make. Big band is my first love,” says Kramer. His musical ideas are engineered in that tradition, by building the music like a big band would on a Basie chart.

Kramer is producing music videos as well, seeing it as a parallel medium for his musical endeavors. “For me they are really connected,” he states. “The way I edit film is much like editing music.” His vision is much like experiencing the multi-sensory experience of live music.

Kramer is not a master improviser, though that is a never-ending evolution for any musician. His solos, however, sing like a composed melody, and speak to the nature of his humanity in the art form. He has been well mentored by multiple musical communities. The wisdom he has graciously accepted from them has been applied to a creative formula that is rooted in the tradition of Black music in America. His artful “stacking” of trombone parts to provide a formidable wall of sound has put his instrument front and center, no matter how framed it may be technologically. Whether building music electronically or carefully crafting big band arrangements, the process is engineered in the same manner. It’s a process of best utilizing the elements of his everyday environment, touched by the wisdom of his mentors.