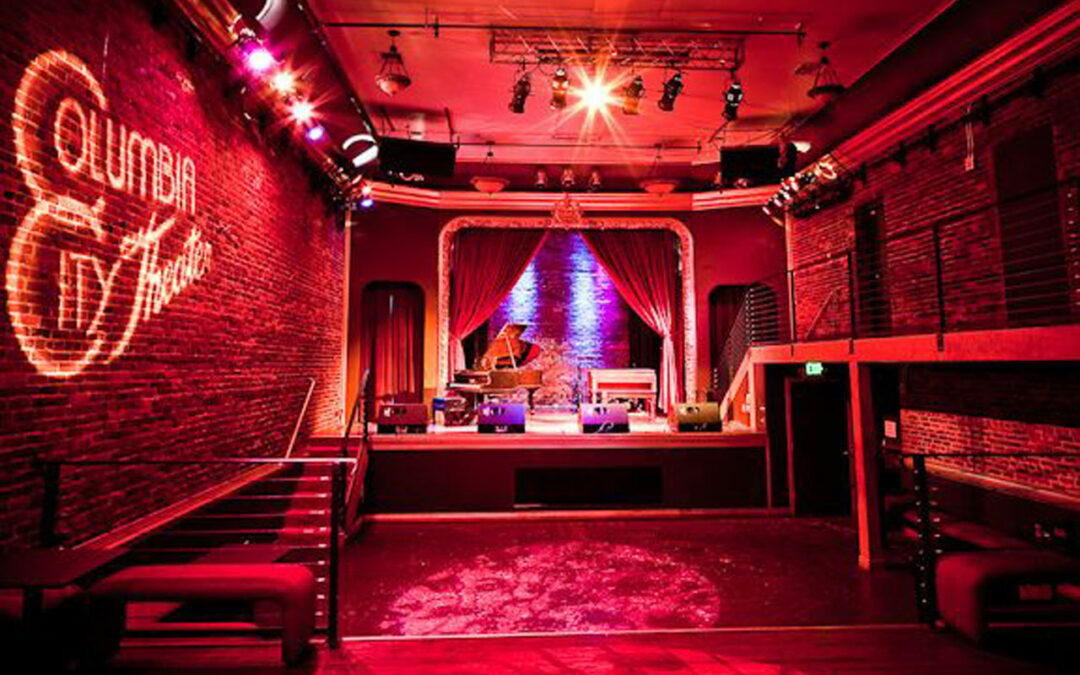 The Columbia City Theater has been a vital part of Seattle’s cultural fabric for over a century. Originally a neighborhood movie theater, performers ranging from a pre-fame Jimi Hendrix to Wilco have graced its stage over the years. The building has been an artist’s commune, hosted underground raves as the Lish House, and more recently was home to the Bourbon Bar and an in-house recording studio. The new owner, Tony Benton, recalls growing up in the 1970s, “This was the only place you could come and watch Black movies…I had some amazing memories there.”

Benton initially had no designs on owning a theater. A native of South Seattle, Benton started out in the music business founding the Telemusic label as a teenager in the late 70s and leading the electro-funk band Teleclere, who served as backing band to local hip-hop pioneers the Emerald Street Boys. Known to Seattle radio listeners as “Tony B” for over two decades at KUBE 93.3, Benton forged a reputation as a trusted source of information for Seattle’s Black community. Disillusioned by corporate media consolidation, Benton eventually struck out on his own, seeking a home for his brand of community-focused broadcasting. From 2015 to 2016, Benton served as interim station manager for KVRU 105.7, helping to secure a low-power FM signal covering the South Seattle area. Following a disagreement with KVRU’s Board of Directors, in 2017, Benton founded internet-based Rainier Avenue Radio, where he began to stream early broadcasts (without permission) from a makeshift studio in the Columbia City Library study room. Library staff allowed him to stay after discovering him at work, but “that wasn’t sustainable,” says Benton.

Temporarily broadcasting from a house in the Central District, Benton honed a vision of a radio station that would serve his community: providing an outlet for shows as varied as Seniors Matter, which centers on the issues facing South Seattle’s elderly population, and Fil-Am Radyo, which broadcasts to the Filipino community in both English and Tagalog. Benton also offered up the station as a local hub, holding food drives, providing a forum for mayoral debates, and hosting an extensive slate of Black History Month events every February.

With an eye towards finding a permanent home for Rainier Avenue Radio, Benton joined the first cohort of the BASE (Building Art Space Equitably) certification program, an effort by Seattle’s Office of Arts and Culture to ease the toll of gentrification, rising rents, and displacement on cultural institutions in communities of color. BASE participants learn strategies for locating and acquiring property, navigating government bureaucracy and collaborating with designers to build spaces to meet their organizations’ needs. Benton says he joined the BASE cohort because, “I was living what they were trying to do.”

The Columbia City Theater’s previous owner approached Benton with an offer to sell in late 2020. According to Benton, “Obviously, the initial thought is yes, but I wanted to make sure that I was not jumping into something that I wasn’t going to be able to do.”  He accepted the offer but requested time to consider his options. “Right or wrong, being black. I never really considered a bank loan. Historically there are reasons why,” says Benton. Through the assistance of the Cultural Space Agency, a city-run public development authority, he received a grant from Seattle’s Strategic Investment Fund. Benton considered the agency an ideal partner “because of their knowledge and familiarity with everything that goes along with purchasing commercial real estate. It’s quite an undertaking.”  The Cultural Space Agency also served as an intermediary between Benton and city bureaucracy, helping “actually get the money from the city into our hands,” he says.

Benton is currently arranging for renovations to the building and plans a grand opening in early 2023. In addition to Rainier Avenue Radio, the theater will eventually become home to the Creative Arts Digital Media Academy, which has provided training in web design, digital photography, and video to more than 400 students since its 2014 founding. In the meantime, he will continue hosting community events and hopes in the near future to host pop-up restaurants in the former bar space.

Benton emphasizes the importance of preserving our neighborhoods’ and communities’ cultural aspect: “You lose the culture of what made a community a community, if all the voices of the community are not heard. If the artistic expression of that community is not felt or seen, you know, it changes the whole dynamic and you lose that…I have come to see this [Columbia City Theater] as a great source of pride for our community, for me to retain the ownership of this building, with the goal in mind of utilizing this space as a creative hub for everyone.”

← For The Record John Hansen: There Is a Piano in Madison Valley →