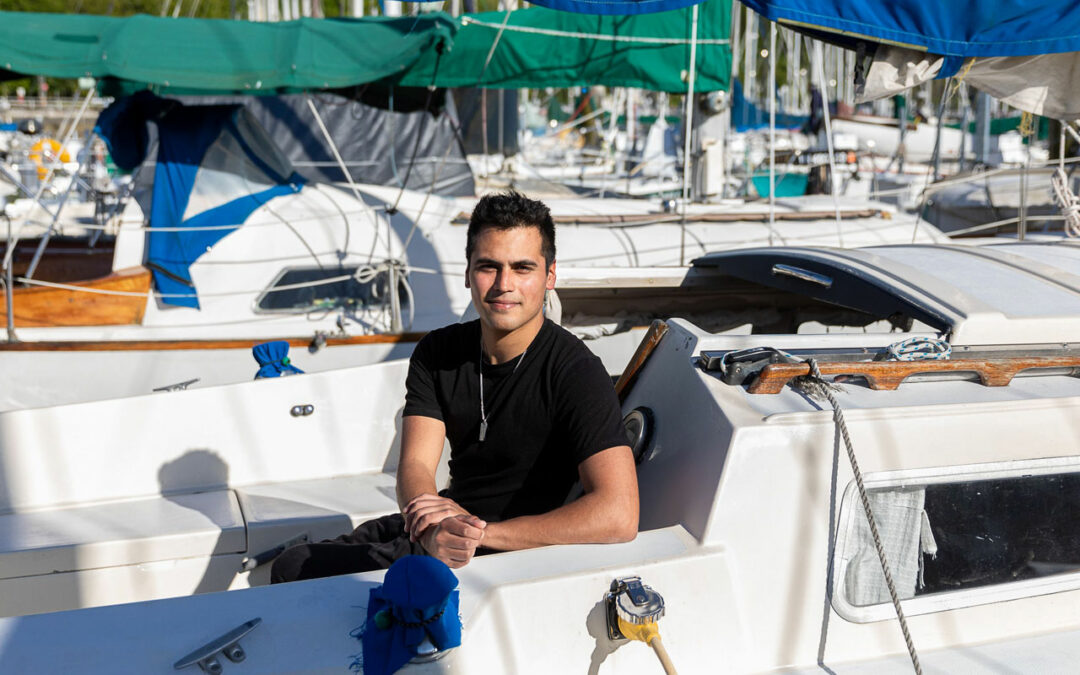 Drummer/composer Xavier Lecouturier has never been one to sit on the sidelines. His go-for-it approach to life can be traced back to surfing and mountain biking in the California of his youth. That ability to rise and respond to the challenges of his life has certainly been evident in his approach to his career in music.

Over the course of the COVID lockdown, he sequestered himself in Big Lake, Alaska at the familial digs of guitarist Martin Budde, and there he hunkered down to record a session (that would later be released on Origin Records) in an airplane hangar. He would ironically contract COVID-19, and most remarkably, learn how to fly airplanes via Budde’s father, a bonafide Alaskan bush pilot. He then, in Autumn of 2021, initiated the return of the Tuesday night jam at the Owl ‘N Thistle—the flickering first light leading to the return of live jazz in Seattle.

Lecouturier was raised north of San Francisco, in Marin County, California. His family home was always full of music, favoring the Latin rock movement led by Santana. He first began playing guitar, transitioning to drums as a junior at Marin School of the Arts. The move to drums just felt natural, and became a passion, despite not owning a drum kit of his own. “I was always thinking about it. There was so much drive,” he recalls. Finally securing a kit in his senior year, he dedicated himself to the point of attending Cornish College of the Arts in Seattle, centering on drum performance and composition. The transition was, if nothing else, swift. “It was so quick, full bore for two years,” he says.

His fascination with percussion impacted his approach to composition as well, ably partnered with pianist and friend Dylan Hayes, who had ventured north to Cornish from Marin as well. “I started getting fascinated with grooves,” he recalls, utilizing limited experience with piano to create melody and harmony around the advanced grooves he was imagining.

Lecouturier was mentored generously by Tim Carey and Dawn Clement at Cornish, two active performers themselves. He began to venture out onto the Seattle jazz scene, his remarkable talents becoming a known quantity around town when only nineteen years old. That traditional dues-paying mentorship was, in itself, an education. “That was my real education, to be honest. Playing the drums and being in a band,” he says, being cautious to point out the huge value of his time at Cornish. He takes with him that awareness of the value of playing with older, more experienced musicians to this day. After an April 2022 performance in pianist Ron Perrillo’s quartet, that included veterans Michael Glynn and Mark Taylor, he remarked, “I was getting my ass kicked, it was great! What a lesson. You’ll never learn that in school. You need to be out meeting other musicians and be willing to get your ass kicked.”

In late 2017, trumpeter Thomas Marriott invited Lecouturier to join his quintet. Marriott wanted to perform live for a year with the same configuration and needed band members to be dedicated to the same. While the acclaimed trumpeter had extensive ties with bassist Geoff Harper, saxophonist Rick Mandyck, and pianist Tim Kennedy, he had only played twice with Lecouturier, in his brother David Marriott’s Triskaideka Band at Tula’s. The ask was revelatory for the young drummer, now only a scant two years into his tenure as a jazz drummer. “I remember the call, it was a powerful moment for me,” he says.

The lessons learned during that one-year tenure were indeed revelatory. He faced musical challenges he had never before encountered, and learned how to take responsibility and be a professional under Marriott. He had to prepare fully, dress properly, and show up on time. There were no excuses. “It wouldn’t fly if you didn’t have it together. You have to take responsibility,” says Lecouturier. “It was a great experience, being able to be at square one, not to have my own preconceptions and just make it work for him. Tom demanded a lot of energy—push it, get in it. I learned how to do that.”

He would take those values forward as a bandleader, performing his original music live and eventually releasing his first album, Carrier, in 2019 on Origin Records. The album garnered positive reviews at All About Jazz, Earshot Jazz, and Jazz Weekly. For Lecouturier, it was a step to be followed by a move to New York—a move delayed at least, by COVID. Recorded under world class studio conditions, the album stands in contrast to the hangar sessions in Alaska in that regard. Yet in August of 2021, the members of Meridian Odyssey (Lecouturier, Budde, Hayes, Ben Feldman, and Santosh Sharma) once again convened in that hangar in Big Lake, this time adding trumpeter and close friend, Noah Halpern, to record Earthshine. The album is set for a July release on Origin and will be accompanied by a West Coast tour in September.

Prior to recording, the band spent six days sailing, flying, and hiking in the wilds of Alaska, bringing this tight knit group of friends even closer. The band could feel the results in rehearsal for the session. It rekindled in Lecouturier, his love of the outdoors and kinship he felt with the natural world. “I had a realization that this was a part of my life that meant a lot to me,” he reminisces. It made sense that the emotions stirred by interaction with nature should be reflected in his music.

Seattle had a new allure to Lecouturier, following his time in Alaska. The city’s unique characteristic of being a cosmopolitan city surrounded by natural splendor found new appeal in the soul of the young artist. He purchased a twenty-seven-foot sailboat, moored it at Shilshole, and took up residence in the sloop. He found that he could ski in the mountains, sail in an inland sea, and play a gig in an urban center, all in the same day if he pleased. Being surrounded by two mountain ranges and the salt water, in addition to the vibrant scene in Seattle was motivation to stay, much to the betterment of the resident jazz scene in the Pacific Northwest.

Lecouturier is a proud member of the LGBTQIA+ community, who speaks to his pride through his music and accomplishments in that realm. “I identify as gay, but I like to fly under the radar, “ he says. That personality trait has revealed much to him about the true colors of people in his life. Coming out as a senior in high school, he had to endure the difficulties of being a gay teenager raised in a Catholic family and attending Catholic schools. “It would have been nice to see more people represented in the music community, like me, when I was younger. I went to Catholic school, and my parents are Catholic and it wasn’t smooth. I’m super proud,” he states plainly. He remains close with his family while they continue to work towards acceptance and understanding.

In Seattle, Lecouturier continues to set an example for young musicians by how he goes about his business on the bandstand and in the studio. He continues to be an open vessel, continually learning from those like Marriott, who have been kind enough to mentor him. He is himself, a kind and generous soul who will keep the flame lit and pass it on to shed light onto the next wave. He will continue to make music, to do much, and say little. “That’s my motto, make it happen,” he says with a mischievous smile. “Everyday.”