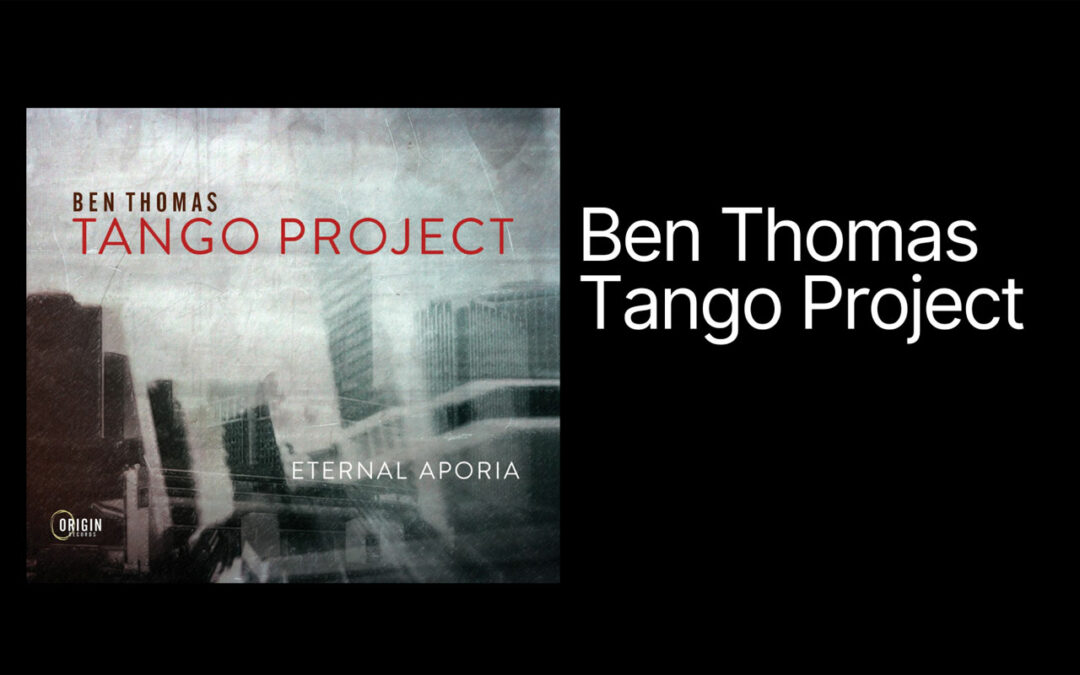 Ben Thomas is an incredibly accomplished virtuoso on the vibes; an improviser and composer of deep expressiveness, wit, and crisply focused execution. Throughout four previous solo albums on the venerable Origin Records label (and as an indispensable member of Jovino Santos Neto’s Quinteto), Thomas has explored an expansive range of challenging and stylistically varied cutting-edge jazz.

For the past 15+ years, Thomas has also been deeply engrossed in contemporary tango music, both as a composer and bandoneon player. The bandoneon is a perhaps more expressive cousin to the accordion and a central element in the sound of tango music. Even though, as Thomas himself says, “You can take the boy out of the jazz band, but you can’t take the jazz out of the boy,” Thomas is not dabbling in tango—he is deeply immersed and committed to making the music a core part of his aesthetic, exploring new sounds through an old tradition.

This brings us to Eternal Aporia, Thomas’ fifth album and the debut recording of his tango trio. The jazz soul remains, but the new album puts the emphasis squarely on a compositional, chamber-music mindset while retaining the forceful rhythmic drive and assurance of a band. Thomas sets a high bar both compositionally and instrumentally, and the results are stunning.

The compositions (all by Thomas) are uniformly superb and cover a myriad of moods and approaches: jazz-tinged melodies, moody cinematic film score textures, and touches of 20th century classical compositional technique. Some, such as album opener “Tangent 7” and “Flights Without Air,” feature odd time signatures and textures invoking Frank Zappa’s more challenging orchestral and chamber music. “The Space Between” is a brooding highlight—an expanded arrangement fleshed out with strings and piano gives it a bracing and fiery Béla Bartók-like quality.

Tango has proven to be a remarkably durable and flexible musical medium, with new generations of composers and musicians continuing to evolve and expand the music in new directions. Thomas’ music breaks some molds, but it never abandons a connection to tango’s fiery melancholy, deep sense of groove, and rhythmic drive. It is dance music after all, though, dancers will be hard-pressed to stay in step with some of Thomas’ formal intricacies and shifting rhythmic structures.

Touchstones for Eternal Aporia are the towering influence of Astor Piazzola’s nuevo tango innovations, along with the waves of more recent innovation on the Argentinean scene. Other aural connections might include hard-to-classify chamber-oriented ensembles operating at the edges of jazz, such as Tin Hat Trio and Dave Douglas’ Charms of the Night Sky projects.

It’s also worth noting that the recording production is sublime; the pure acoustic beauty of the instruments shining through and exquisitely mixed. Eternal Aporia is substantial and deep, an album that rewards repeated, focused listening. Find Thomas and company at their upcoming gigs August 10 at Bellevue Connection and on August 11 at North City Bistro.