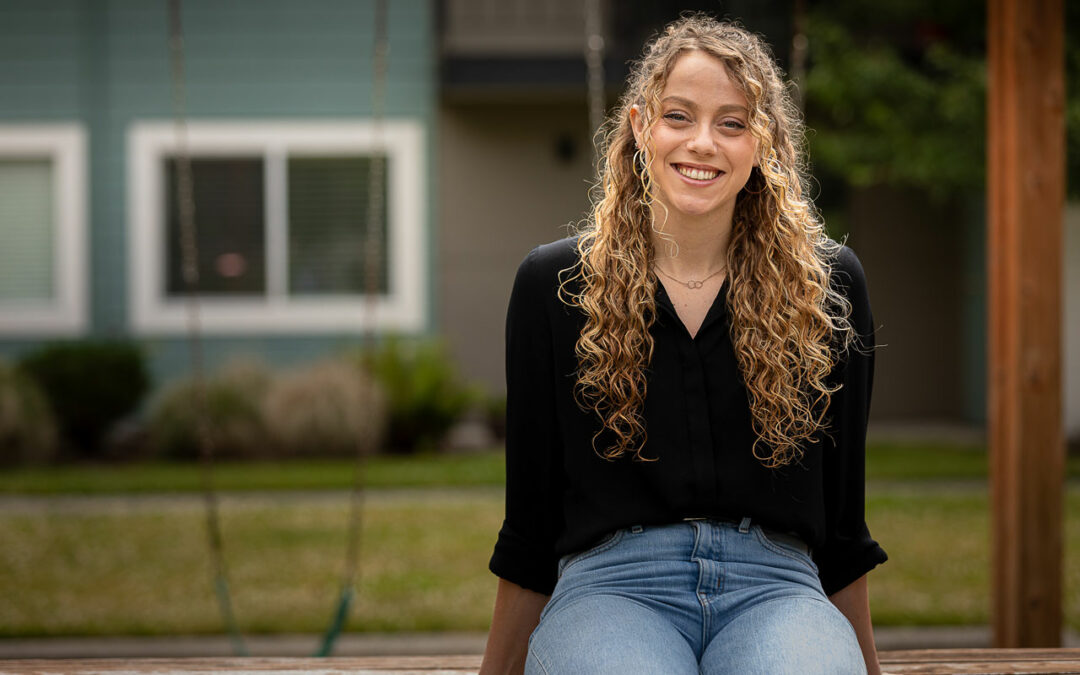 We know what jazz offers us as listeners: a way of capturing our most complex emotions; an experience that’s never twice the same; a fleeting zen moment in the now.

A few of us are lucky enough to experience jazz more directly, as musicians ourselves. We know what it means to push into a melody and transform it into something new, how it feels to speak by shaping a note. Whether we do these things on an out-of-tune basement piano on Sunday afternoons or in front of a packed Friday night house at The Royal Room, we get to live inside the music.

Hannah Mowry is in the business of giving people that direct experience of jazz. Mowry is a musician, a trumpeter who has played with Alec Shaw, The pH Factor, The Jazz Police, and Pony Boy All-Star Big Band. She’s also a music educator: a band director working in the tri-city schools to teach music and especially jazz to high schoolers. For four years, she’s taught at Mount Si High School and this month takes over from Scott Brown at the storied Roosevelt High program.

Mowry talks a lot about her own gratitude to the teachers who have shaped her life. Her voice is tinged with reverence when she discusses her musical influences, from her parents, who first instilled in her a love for music; to her sister, Sarah Butler, also a band director in the area; to professors at Central Washington University like Chris Bruya, John Harbaugh, and Lewis Norfleet. She makes a point of mentioning her Hanford High School band directors—Kevin Swisher and Chris Newbury—by name.

Of course, she talks about famous musicians who influenced her approach to jazz—the usual suspects like Miles Davis, Chet Baker, and especially Roy Hargrove. It’s her teachers, though, who she says “totally shaped the musician that I am today.” It was Swisher and Newbury who taught her not to be intimidated by the demands of improvisation, who “made it really safe for me to explore that creative side,” and who convinced her “it was OK to be bad at it and it was OK to fail.” It was the well-known Canadian trumpeter Ingrid Jensen who took the time to conduct a clinic at Hanford High and who “just changed my life” by modeling what a female jazz musician could be.

It should come as no surprise then that Mowry would eventually decide that working as an educator was just as important to her as being a musician and that the two could coexist side-by-side.

Mowry’s instincts as an educator come across immediately when you talk to her. She has that knack for explaining difficult concepts in ways that are easy to understand. She’s animated and gestures with her hands. She frequently brings up the fact that her students have taught her as much as she’s taught them.

She has another important asset as an instructor: a passion for her subject. It helps that Mowry herself is a working musician. She’s performed the big band solos; she’s gigged on albums. Recently, she had the opportunity to premier some of her own compositions at Mo’ Jam Mondays, a weekly tradition at Seattle’s Nectar Lounge. Mowry isn’t just teaching musical principles, though, or stylistic pointers, or even how to carve out a career in the music industry. She’s teaching her students to get excited about jazz.

Mowry’s real strength as a band director, is that what she teaches is drawn from her own background, not just her work as a professional but all of the many lessons she learned once upon a time as a student. For instance, she emphasizes improvisation, a skill she struggled with in the beginning. Of course, it’s an important element of jazz music. “If we’re not teaching improvisation, then we’re not really teaching jazz.” Mowry treats it, though, as a necessary life skill. “Whatever way that you express your art, it is always a direct reflection of who you are,” she says.“That’s kind of what we’re doing here, is that we’re sharing a version of ourselves through music.” She marries that principle to another important one: “Music is human. There should be mistakes. If there’s a perfect performance out there, I don’t want to hear it because that means it’s not human.” Jazz is humanity. Humanity is jazz.

In the same vein, Mowry uses jazz to teach students about community: It’s not about getting to play with this or that famous musician but rather about the sharing that happens in  performance. At other points in our conversation, she holds jazz up as an example of the powerful fusion of opposites: a reverence for tradition but a tradition that we must push forward ourselves. Later, she describes the importance of jazz history and of what it can tell us about oppression in this country. She talks about jazz as a space in which many musical styles can come together.

The Value in Jazz Education

Like any great educator, Mowry doesn’t shy away from talking about the mistakes she’s made as a teacher and what she’s learned from them. She tells a poignant story about her first year out of college when a student in one of her classes was subjected to racism but didn’t feel safe enough to talk to Mowry about it. The experience taught her lessons about the importance of allyship; that  “mentorship must be intentional” and that listening is about much more than fine-tuning a jazz ensemble.

In the end, this is perhaps the most important quality she brings to the Roosevelt High program. Of course, she has plans for the music itself: to seek new fusions between the past and the present, to bring her eclectic ear for music—country to hip hop, and to bear on how a new generation of students hear jazz. She also brings to the position the experience of being an outsider—a female trumpet player, a female director, a female jazz musician—and that has clearly influenced her approach as an instructor. She argues that we must acknowledge “the story of the human being behind the music.” Hers is a bright vision of the future of jazz as inclusive, with room for ever more voices.