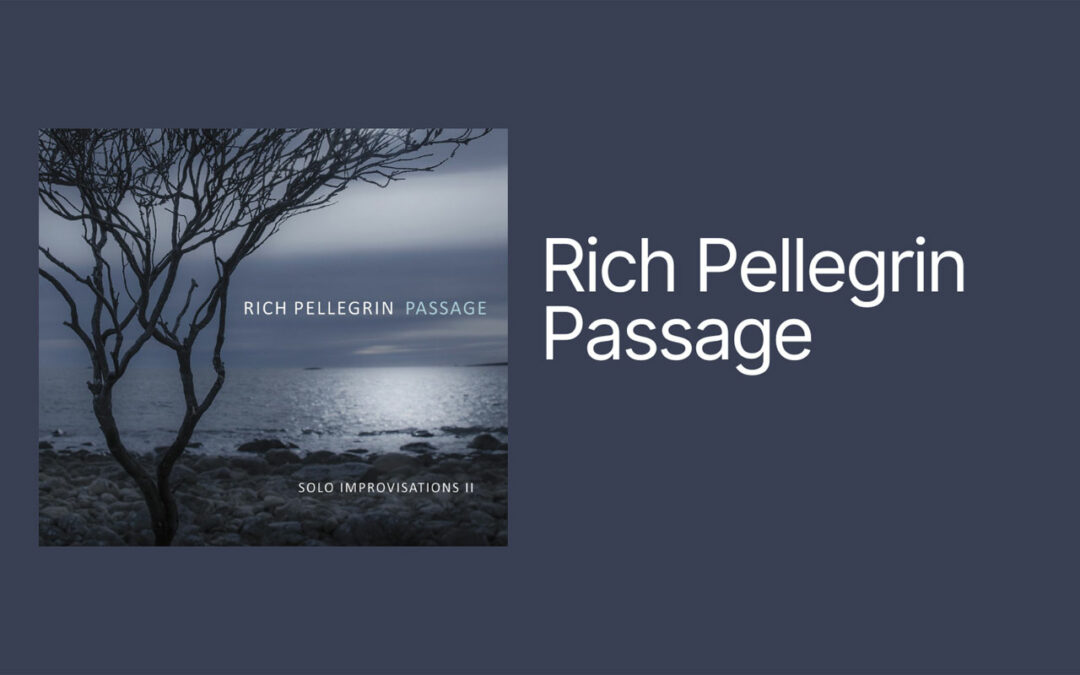 Pianist Rich Pellegrin, who attended graduate school at the University of Washington, is currently an assistant professor of music theory at the University of Florida. He has published extensive scholarship on such artists as Thelonious Monk, Robert Glasper, and Bill Evans and released five albums on Origin Records’ OA2 imprint, his band featuring Seattle jazz stalwarts like Evan Flory-Barnes and Christopher Icasiano. During his time on the University of Missouri faculty, Pellegrin produced the Mizzou Improvisation Project, in which an ensemble of his students performed and recorded with his Seattle bandmates.

Drawn from the same summer 2019 sessions that produced 2021’s Solitude: Solo Improvisations I, its sequel Passage: Solo Improvisations II features thirty untitled piano sketches identified by Roman numerals. They range in length from thirty seconds to four minutes, recorded by Pellegrin on an old piano in the fellowship hall of Whidbey Island’s Langley United Methodist Church. As an engineer, he values the physicality of his performances, capturing the weight of his feet on the piano’s pedals and the creaking of the bench as he moves his body with a palpable immediacy. Pellegrin scrutinizes his instrument’s tonal qualities, building some pieces around forceful ostinatos, others around delicate trills. With “Improvisation XVIII,” Pellegrin considers the piano’s capacity for sheer sonic texture, deploying flurries of notes across a variety of registers. Pellegrin also values juxtaposition: “Improvisation XXIII” features a tangled, percussive attack that invokes his teenage sojourn into drumming, while “Improvisation XXVI” features gently played chords that punctuate lengthy stretches of silence. On “Improvisation XX,” Pellegrin even explores the inner workings of the piano itself, scraping the strings to create shimmering overtones.

Skillful improvisation is essentially a form of heightened awareness—Keith Jarrett’s Köln Concert famously concentrates on the piano’s middle register to compensate for an instrument with an unpleasantly tinny high end. Throughout Passage, Pellegrin tailors his playing to the meditative aspects of the church setting, letting his notes sustain and decay to reinforce a sense of heightened intimacy. Solo improvisation also provides a creative proving ground. The pioneering guitarist Derek Bailey, a theoretician of free music, claimed that improvisation is “playing without memory.” The performances on Mingus’ 1964 solo record, Mingus Plays Piano, complicate Bailey’s bold claim. The legendary bassist set aside his main instrument for the one on which he composed, exploring melodic and rhythmic concepts to develop embryonic versions of tunes that would later be performed by his full band. Like Mingus, Pellegrin feels his way towards the best approach. Rather than discard choices outright, many phrases Pellegrin plays at halting tempos, with a tentative touch, develop greater fluency and confidence with repetition. Passage masterfully synthesizes these techniques, proving Pellegrin an improviser of uncommon sensitivity and offering an invaluable window into a creative mind at work.