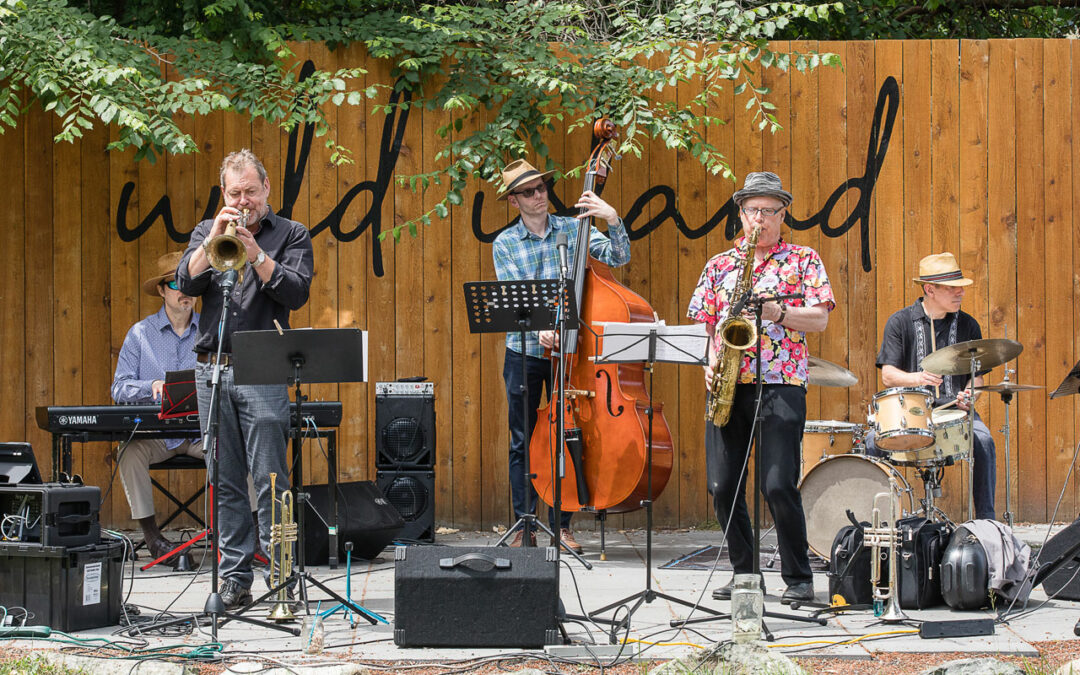 The cities of Seattle, Portland, and Vancouver, B.C., have supported vibrant jazz culture since the years following World War I. One commonality between jazz in what was then a remote outpost in the early twentieth century and the music now in the 2020s, is the far-reaching tentacles branching out of these urban cultural centers to the smaller and rural cities beyond the Pacific Northwest.

Beyond Seattle, there are strong, active jazz scenes in smaller sister cities in Olympia and Bellingham. There is Jazz Port Townsend each year in that idyllic setting on the Admiralty Inlet. From the maritime communities of Western Washington to prairie towns in the east, jazz music has been ever-present. That musical reach has now spread to Orcas Island, where German-born and bred composer/trumpeter Oliver Groenewald is staging a summer outdoor concert series at Wild Island Restaurant, an establishment he and his wife Wendy have operated since 2018.

The series kicked off in July with Groenewald’s Quintet featuring Seattle jazz great, Jay Thomas. This was followed by a three-day engagement with a quintet led by young bassist Stanley Ruvinov and featuring Seattle vocal artist Jacqueline Tabor. Groenewald hosted a Horn Extravaganza in that time as well, with two New York-based musicians joining him, in alto saxophonist Nick Biello and trumpeter Charlie Porter. Local artist Steve Alboucq joined on trumpet. The month closed with Groenewald deciding to stick to this three-day residency format, bringing in Seattle fusion dynamos, The New Triumph, and a quintet featuring Bellingham-based drummer Julian MacDonough, a longtime friend and ardent participant on the Seattle jazz scene.

A trip to Orcas during the summer months is a welcome retreat for Seattleites looking to escape urban doldrums in favor of the natural beauty and relaxed vibe of the islands. A visit to Wild Island to take in a set or two and enjoy healthy, world-class cuisine in an idyllic setting is an intriguing option. Attending the concerts, however, does not require patronage of the restaurant. Groenewald does not stage the performances to benefit the restaurant, seeing it more as a benefit to a community he has grown to love. “Just come and sit. Bring your blanket!” he says. August will see Tacoma stalwart saxophonist Kareem Kandi, Seattle saxophonist and tap artist Alex Dugdale and his Fade Quintet, and singer/songwriter Madison West visit the Wild Island Stage.

Groenewald’s arrival on the Northwest music scene coincided with his decision to study composition with Chuck Israels at Western Washington University in Bellingham from 1994-1996. At the time, he was a young, talented composer in classical music, hailing from Germany, a country that provides a future for talents such as his, via a plenitude of public orchestras. His interest in jazz was not so much born in love for the genre but an interest in knowledge. “I wasn’t in love with all kinds of jazz; I was in love with knowledge. Studying jazz offered a whole lot more knowledge of music,” he recalls. His complete immersion into jazz and his roots in European classical music would merge into an identifiably unique approach to composition and arrangement. Seattle jazz fans have become recently acquainted with those personal traits from Jay Thomas’ opus, I Always Knew. The album features Thomas’ lush, full-bodied solos played over Groenewald’s arrangements performed by his “Newnet.”

During his time in Bellingham, he shared a house with Northwest bebop trumpet legend, Willie Thomas, who had moved there to be closer to his daughter and granddaughter, both of whom are Orcas Island residents. Wendy Thomas had purchased property on Orcas while attending a culinary institute in Seattle. Groenewald accompanied Willie Thomas to the island to visit his daughter one weekend, a visit that would be fateful for him indeed. The two ended up in marriage and moved to Hamburg, Germany, for three years. Their return to the islands, and the Pacific Northwest, led to the opening of Wild Island in 2018. Wendy’s focus was and is healthy cuisine, with her vision including a musical connection with the community. Groenewald continues to write for the German Chamber Orchestra, among others while enjoying the lifestyle of the San Juan Islands. While the Wild Island Stage performances may seem to many of us to be an extension of the Seattle jazz scene, it may as well be seen as an artist in Groenewald, reaching out to touch us here in the city. It’s a connection that portends to be with us in the foreseeable future.