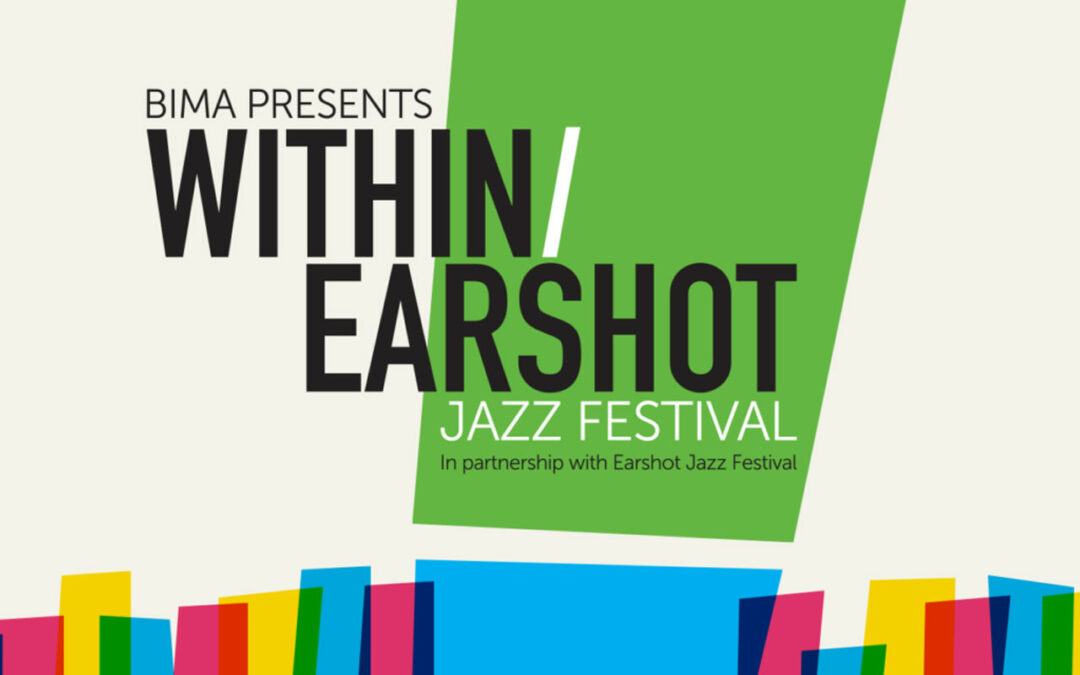 BIMA and Earshot Jazz are excited to partner for the sixth year in a row to present WITHIN/EARSHOT, a hybrid, month-long festival celebrating jazz and the diverse talent of the region through concerts, film, conversations, and art.
Tickets at biartmuseum.org/events/within-earshot-jazz-festival-2022.

EntreMundos Quarteto electrifyingly brings to the stage a deft blending of funk, jazz, and soul melding with the classic sounds of samba and bossa nova. Starring the elegant and lilting vocals of Adriana Giordano, the superbly versatile Eric Verlinde on piano, and the locked-in rhythm section of Jeff Busch on drums and percussion and Dean Schmidt on bass.

For this Bainbridge performance, award-winning vocalist/composer/lyricist Eugenie Jones and her band offer a program of jazz standards, including work that pays tribute to some of the great American women jazz vocalists and works featured on her newest release, Players.

Multi-awarded pianist, composer, and educator Marina Albero is a captivating performer whose playing deftly draws on a lifetime of music tradition, from her native Barcelona in classical and early music as well as flamenco, to Cuba and Son Cubano, to American jazz. This trio concert features bassist Jeff Johnson and tablas player Anil Prasad.

Webinar with producers and directors, Sandy Johnson Osawa (M’Kaw) and Yasu Osawa, discuss the making of their films and honoring Native artists in jazz. They formed their own production company in Seattle in 1980 and have produced a ten-part series on American Indian issues for NBC, directed Pepper’s Pow Wow (screening October 11) and a one-hour NBC special on treaty rights plus over 60 videos for museums, tribes, and organizations.

Nigerian American jazz musician Aham is a divorced father of two who longs for a career as a musician but must pay the bills with his soul-sucking desk job. His only solace is found at night behind a trumpet in Seattle’s jazz clubs. His father, a stranger from Nigeria, steps in with opinions on the matter which sends Aham into a tailspin. Featuring local actors and musicians and directed by The Stranger’s Charles Mudede. The 7pm showing includes a post-screening Q&A with Mudede and writer/lead actor Ahamefule J. Oluo.

In honor of Indigenous People’s Day, BIMA presents a captivating look at the life of Native American jazz saxophone pioneer Jim Pepper, the first widely recognized musician to fuse Native American music with jazz. Pepper’s life and music harmonized two distinct cultures and serve as a poetic example for all Indigenous people, “walking in two worlds with one spirit.”

Avant-jazz mystic Sun Ra brought his pioneering Afrofuturist vision to the screen with this film version of his concept album. It’s a wild, kaleidoscopic whirl of science fiction, sharp social commentary, goofy pseudo-blaxploitation stylistics, and thrilling concert performance, in which the pharaonic Ra and his Arkestra lead an intergalactic movement to resettle the Black race on their utopian space colony.

This documentary concert film captures the sounds and performances of some of the major jazz artists at the 1958 Newport Jazz Festival. Unlike earlier jazz movies that had been filmed in smoky black and white, this is shot in vibrant color. While musicians such as Louis Armstrong, Thelonious Monk, Anita O’Day, and Mahalia Jackson perform, images of beaches, sailboats on water, dancing couples, and the faces of joyful audience members are intercut into the proceedings.

Join this online discussion on the films and themes from the Syncopated Cinema series with special guest Charles Mudede, director of Thin Skin and senior writer for The Stranger. Mudede will explore jazz as a narrative element in filmmaking, bringing a production from stage to screen, and the challenges of premiering a film in the early days of COVID.

In this first of two lectures, jazz historian Jim Cauter takes us through the fundamentals of jazz, from its birth to early contemporary artists.

In this second of two lectures, jazz historian Jim Cauter delves into the future of jazz, how it is changing, and how it is still evolving.

An exploration of the impacts of race in the development, shaping, acceptance, and future of jazz. Panelists bring their experience to bear on this important discussion as they delve into the social structures surrounding the music. Featuring musician, filmmaker, and composer Ahamefule J. Oluo, Rainier Avenue Radio DJ Kevin “Big Poppy” Callahan, and Seattle JazzED Education Director Kelly Clingan.”