Catching Up With Clark Gayton

Catching Up With, December 2022 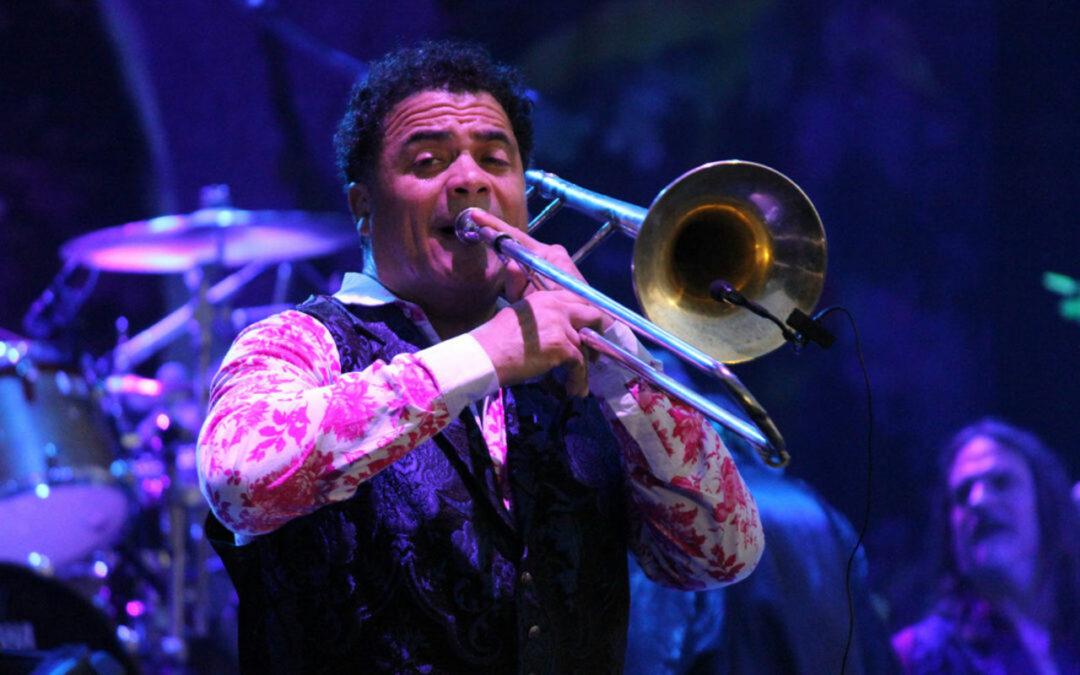 Trombonist Clark Gayton was recently in town to attend the 100th anniversary of his alma mater, Garfield High School. The late August celebration brought together Bulldogs from every era of the Central District school’s storied history, including those that have made their mark in the music industry. Garfield alums include Quincy Jones, Ernestine Anderson, and a litany of others.

Gayton, like so many Seattle jazz musicians, left the Emerald City seeking a life in music, carrying with him the musical tools and life skills he learned in his hometown. Over the past forty years, he has become one of the most in-demand musicians in New York, touring and recording with the likes of The Skatalites, Steel Pulse, Rihanna, Whitney Houston, Sting, Elvis Costello, and as a regular touring member of Bruce Springsteen’s band. Gayton will appear with Springsteen in Seattle at Climate Pledge Arena on February 27.

His jazz pedigree has given him the ability to play music cross-genre, as well as perform regularly in the jazz world with the Charles Mingus Big Band, Charles Tolliver, and others. “That’s how I was able to cross genre lines–by being prepared,” he remarks, concerning his jazz skills and versatility.

Gayton was tutored by Garfield legend Clarence Acox Jr. but attended before the school had an actual jazz band. He was Julian Priester’s first student upon the trombone legend’s arrival in Seattle to teach at Cornish College of the Arts. His entrance into the prestigious Berklee School of Music was his ticket out of Seattle, a monumental challenge for him at the time. “By the time I got to Berklee, I felt a little unprepared. When I first saw the guys in the practice room, I wanted to go home. The one thing I had inside of me was the Ellington/Basie approach that I learned from Clarence. That’s what I hung my hat on,” he says.

He eventually left Boston for San Francisco then finally for New York, where he has lived ever since. But while all of this sounds glorious, going to New York is no safe bet for any musician, and Gayton paid some serious dues before finding his way. His first stop in the San Francisco Bay area saw him play in the house band at Sonny Buxton’s Milestones Club, where he backed up luminaries such as Ernestine Anderson and John Handy. Seattle-based drummer and educator Brian Kirk was also in that band.

Gayton arrived in New York with $700 in his pocket. His initiation to the jazz life in New York City included playing on the streets with the soon-to-be ascendent trumpeter Roy Hargrove. On a good day, they could make a hundred dollars, enough to get something to eat and after a few days, pay their rent.  “We used to play on the street when I first got to town, on 42nd Street: me, James Zollar, and Roy. We’d get a bass player and piano player and play all day. We’d get enough money to get something to eat, go down to Popeyes and get a two-piece, go home and do it again the next day,” he recalls.

The ‘90s saw Gayton join the Mingus Band and their residency at Jazz Standard at a time when the gathering audience was rife with hip celebrity. He jet-setted around the globe with Sting’s touring band, a musical relationship he maintains to this day. The decade also was a collision with ska and reggae rhythms for the trombonist, eventually earning him a spot in The Skatalites and Steel Pulse. It enabled him to use his jazz chops in an instrumental format that encouraged innovation and introduced him to an entirely new audience. One of his bandmates in The Skatalites was now Seattle-based trumpeter Nathan Breedlove. All the while, he performed with The Lionel Hampton Orchestra, including two years on the road.

“We had some epic, transcendent shows with The Skatalites. I used to say that the band could levitate the stage. When you get a piece of that, playing with someone that levitates the stage, that’s all you want. Nate [Breedlove] was there when this was all happening. We had some good experiences together on stage–it was really fun,” reminisces Gayton.

The rhythmic lessons learned from his ska experience have become a major part of the fabric of Gayton’s music as a leader, creating music that mimics The Skatalites’ approach but also etched out the beginnings of dance music that came to be known as “acid jazz.” A dive into his recordings with his band, Clark & the Superslicks, reveals a sound that draws from reggae, ska, his time with the iconic Skatalites, and an approach to trombone that draws from his immersion in jazz and his familial New Orleans roots.

Gayton’s name seems to fly under the radar when mention is made of great Seattle musicians who have achieved success upon leaving. Gayton’s touring history and extensive discography clearly speak to his amazing journey in music.