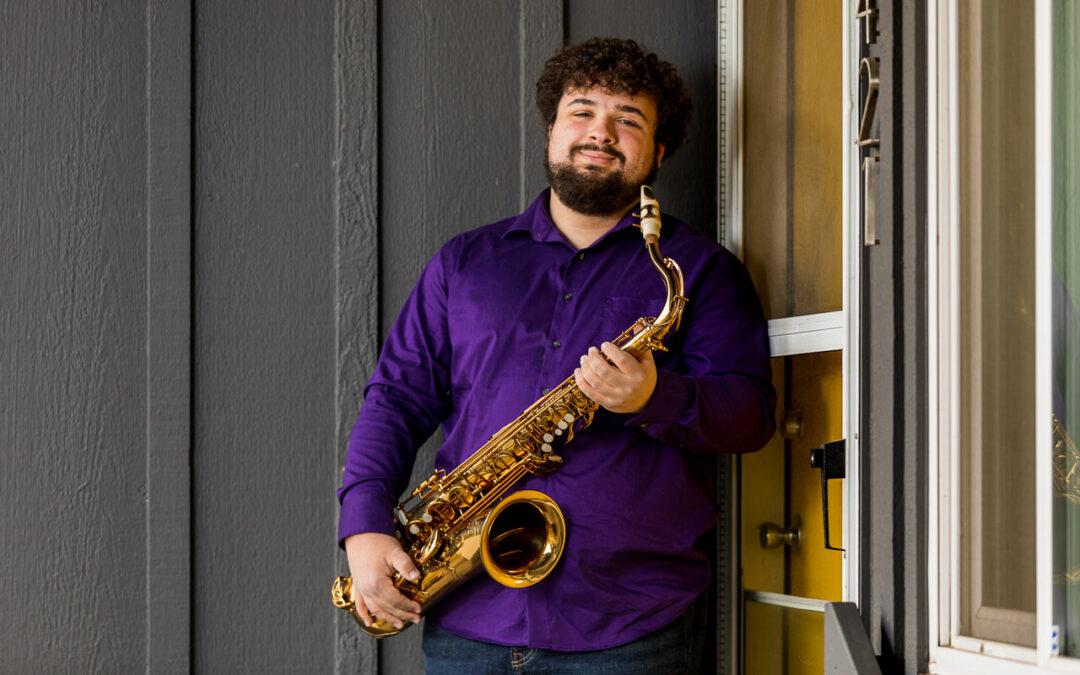 The kid’s young. But what’s age? “Aging is an extraordinary process where you become the person you always should have been.” David Bowie said that. He’ll be ageless for ages. Saxophonist Jackson Cotugno is 23 years old. He’s young and got spunk. Most of his professional career, he notes, has happened post-COVID, and, really, did COVID ever leave? He’s focused now on improving his playing, his art, and his craft every day.

He’s wetting another reed for his horn; turning the page of another chart; blowing notes in hopes of blowing people away. He thinks that maybe another set on stage will give people, no matter their age, something not only to listen to, not only to tap their foot to but maybe, in some way, have them feel something they wouldn’t have otherwise; altering, just a little, the course of their lives, even if just for the length of a tune, or a few bars of music in a raspy Seattle bar. Maybe have people listening to him play, stop aging entirely into that space where music brings everything together: player and listener, time and location, into one ephemeral moment.

“Without music,” Cotugno says, admittedly, “I wouldn’t be doing much.” He continues, now a woodwinds technician at The Mighty Quinn Brass and Winds and freelance musician, “Before music came into my life, I literally did nothing and had no concept of what I wanted to be.”

There was music, of course. Every childhood has music. His dad was a punk bassist in New York City back in the ‘80s before young Cotugno came into the world. The house was filled with pop and punk, grunge and prog-rock. Peter Gabriel was played. Pink Floyd. The Psychedelic Furs. Warren Zevon.

Through those entry points, Cotugno discovered electronic music, dubstep, and trance music. “I especially liked the tracks that were longer and had no vocals,” he remembers. “I think it predisposed me to liking improvised instrumental music in the future.”

The future was far off. The kid was unmotivated. The kid didn’t know he had any skills or, even if he did, the desire to cultivate them. The kid had no direction. In school, he was half-assing it. The character Ron Swanson, in the hit TV show “Parks and Recreation” once famously said (the memes prove it), “Never half-ass two things, whole-ass one thing.” But, Cotugno, wasn’t even asking himself at the time, “What one thing is there in my life to whole-ass?”

The tenor saxophone. But, then again, not really. “I picked the tenor saxophone because it was the least relevant instrument in a middle school concert band setting.” Don’t dare utter such things, young Cotugno, to the likes of John Coltrane or Dexter Mobley; Lester Young or Illinois Jacquet. “I saw that one tenor sax kid absolutely zoning out and you couldn’t really hear him at all. So, in 8th grade, at the age of 14, I showed up to band class with a tenor saxophone.”

Perhaps not an inspiring origin story. But, from a grain of sand in an oyster, can come a pearl. Cotugno became pearl. It took more than a grain of sand. It took the tides of band teachers, too. “I joined jazz band on the recommendation of my band director who was pretty sick of my crap.”

He joined. He wasn’t too sure about it. It was hard work. He thought the work would suck. He thought that it’d be sucky, boring, or both. And, maybe jazz, though more exciting than middle school concert band music, might be more exciting. How exciting could it be, really? Don’t dare utter such things to the likes of Ben Webster or Coleman Hawkins; Stan Getz or Sonny Rollins. “I ended up really liking it and it showed me music means way more when you start paying attention.”

He started paying attention. It paid off. He began playing seriously in high school. He practiced. It was hard work. He took private lessons. He found a mentor from a brass prodigy from California. He began to get a deeper appreciation for the jazz art form, of his horn, of dedicating oneself to something, to going full-ass. The young can learn. “Education’s purpose,” Malcolm Forbes said, “is to replace an empty mind with an open one.”

Cotugno’s mind opened to the music and the music opened him to himself and his place in the world. “It gives me a sense of purpose, a sense of being.” He opened, as did his saxophone case, again and again, as he pulled it out to play, and play, and play some more.

Both as leader and sideman, he’s played many of Seattle’s best-known spots, including The Royal Room, Tula’s, Boxley’s, The Sea Monster, The Angry Beaver, and other venues. He’s studied with Chad Lefkowitz-Brown, Jeff Lederer, David Sanchez, and Brian Kent. He’s played with Thomas Marriott, Eric Eagle, Kim Maguire, and many other jazz luminaries.

“I want to make all people feel something,” Cotugno says. Whether it’s someone aged 19 or 91, he wants horn in hands, to give people a moment, both eternal and ephemeral. He wants to play something that might make both David Bowie and Ron Swanson smile, both knowing how far the kid with the tenor sax has come; both knowing how far the kid will get to go.