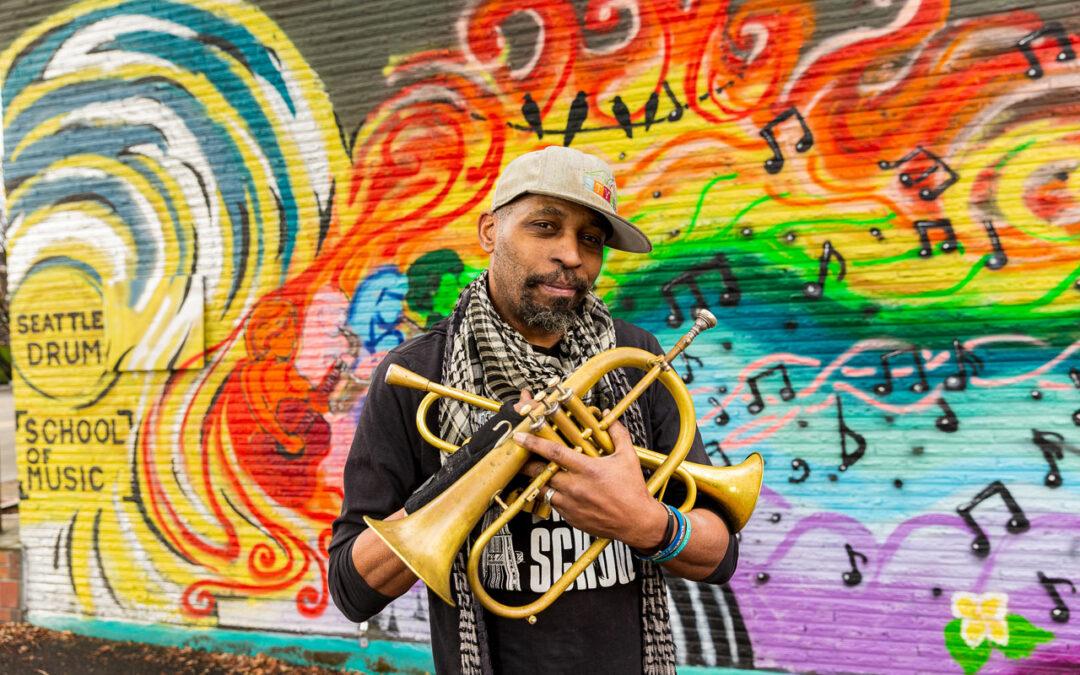 Trumpeter Chris Littlefield drapes himself across an armchair in the lobby of Georgetown’s Seattle Drum School, describing the elementary school band demonstration that eventually led to his life in music. “I was immediately drawn to the trumpet,” he recalls. “Well, a saxophone is pretty cool, but it’s got too many buttons. Look at the trombone —it’s got this weird, awkward slide. Oh, the trumpet looks really cool! Louis Armstrong! It’s only got three buttons; how hard can it be?”

Plenty hard, it turns out. To even produce a sound required a complex coordination of lungs, lips, and fingers. “The first thing about playing trumpet is it’s inherently a mistake-prone instrument,” Littlefield says. Everything from the placement of his tongue to the distance between his teeth affected his tone. Not to mention the seven valve combinations; hold two instead of one, and the Bb he meant to play was a D instead. “It’s a pain in the ass. I love it and I hate it.” he quips. “Like Dizzy Gillespie said: ‘Some days, you win. Some days, the horn wins. And then you die, and the horn wins.’”

Littlefield relished the fight. A native of Oakland, California, he moved to Bremerton with his family in the mid-seventies. He dedicated himself to his craft in high school, often sitting first chair in Olympic High’s jazz band and wind ensemble. He worked hard to earn a spot in Central Washington University’s music education program but the grind of practice, competitions, and auditions wore him down. “I flaked my way through my first year,” he says, barely attending class and nearly getting expelled for his trouble. His academic performance improved as a sophomore, but an unexpected opportunity inspired a change in priorities. He joined a Duke Ellington tribute fronted by former Ellington band singer Herb Jeffries, whose sheer presence made a deep impression on him. “That guy did not need a microphone. God, his voice was so big,” Littlefield remembers. That tour “turned my head around,” he says. “It made me want to actually go out and perform.”

After another year in college, Littlefield dropped out to seek his fortune in Seattle’s vibrant music scene. Over the course of the nineties, he matured into a versatile professional, fluent in both the funk-rock of Phat Sidy Smokehouse and the moody, exotica-influenced instrumentals of Tuatara. He learned the art of horn arrangement in collaboration with Phat Sidy and saxophonist Jon Ryser and explored jazz repertory in the first incarnation of drummer John Ewing’s Reptet. And he formed bands of his own: the Earth, Wind & Fire-style ten-piece Cornucopia, and Bassackwards, purveyors of what Littlefield termed “boom-bap jazz,” his take on the innovative blend of jazz and hip-hop pioneered by Digable Planets and A Tribe Called Quest.

Alongside peers like Reggie Watts’s Maktub, during the late nineties and early aughts, Bassackwards became a fixture in the culture of freewheeling R&B experimentation centered around The 700 Club and the Baltic Room. In the wake of the jazz/hip-hop fusion, as a deeper blend of improvisation and funk grooves developed, players like Littlefield, who straddled both worlds, thrived. “Nobody tripped. Nobody thought, like, ‘You play jazz, you stay on your side of the stage,’” he remembers. “Everybody had all this respect for one another, and it was really cool.”

Littlefield has kept the spirit of those days alive for two decades as a member of Marmalade, a revolving-door funk jam featuring many of his former Phat Sidy and Bassackwards bandmates. Currently based in the High Dive, over the years Marmalade evolved from a weekly club night into a monthly residency, a change in schedule that Littlefield believes secured its longevity. “It becomes very special. It’s like a treat, a delayed gratification. You get to wait for it, and you don’t get burned out on doing it.”

In 2001, he joined San Diego saxophonist Karl Denson’s band Tiny Universe (KDTU), holding down the trumpet slot for the next twenty years. KDTU’s eclectic style, encompassing everything from the New Orleans funk of The Meters to Jimmy Smith’s greasy organ jazz and Allman Brothers-style Southern rock, earned them a place at the heart of the jam band scene. KDTU honed their chemistry on the road; Littlefield remembers “well over 200” dates per year at their peak. Their concerts embraced the open framework and exploratory spirit of jazz. “Sometimes what would happen is these little riffs or ideas punctuated throughout the solo sections and would become a whole other source of composition for the band,” he says. “That’s the ethos of what everybody is shooting for, going all the way back to the Grateful Dead.”

Thriving under the mainstream’s radar for decades, the subculture inaugurated by the Dead spawned a network of fans who throng festivals nationwide. Dedication is the name of the game. “You might see some fans from the East Coast at three or four festivals out here on the West Coast and vice versa,” Littlefield says. He appreciates the scene for more personal reasons, too: “It’s so unique, in that you can work, and you didn’t worry. And everybody was working—up until the pandemic—and making a living.”

During the pandemic, he retired from touring, a decision that was the culmination of years of changes. A few years into Littlefield’s Tiny Universe tenure, Karl Denson put them on an extended hiatus. Suspecting the band was done, Littlefield and several of his bandmates formed Blu Sirkut, combining Thievery Corporation-style electronica with synthesizer-driven funk. After Blu Sirkut disbanded, Littlefield founded Klozd Sirkut, a locally-based successor. Moving from an established band to new ones meant building an audience, which meant smaller guarantees. Strapped for income, he took a landscaping job and filled an open trumpet instructor slot at the Drum School. Once the hiatus ended, KDTU maintained a reduced schedule, so Littlefield held on to both gigs. At times, between those responsibilities, KDTU, Blu Sirkut/Klozd Sirkut, and Marmalade, he worked three or four jobs simultaneously. Littlefield quit the landscaping job after seven years but working exclusively in music once again didn’t ease his growing burnout.

He left KDTU, trading the blur of red-eye flights and long-haul bus trips for a five-minute drive from the Beacon Hill home he shares with his wife and daughters. Littlefield is now a full-time educator. Besides one-on-one trumpet instruction, he runs a jazz camp at the Drum School and helps lead Washington Middle School’s Junior Jazz program. His role at the Drum School has grown over the years; as production manager, he upgraded the PA system at The LAB at 1010, the Drum School’s in-house concert venue, and during the pandemic, developed a system for holding real-time online classes.

The Drum School has even become his home away from home. Honoring his oldest daughter’s request for her own bedroom, he moved his studio into his Drum School office. Many days, he heads there after dinner to record play-along tracks for his students and compose pieces for music licensing services like Audiosocket or IQ Beats, founded by his old Bassackwards buddy Steve Scalfati.

While he still performs with Marmalade and hosts his own Upshot residency at the Sea Monster Lounge, Littlefield is at peace with his new life. Looking back on his career, he is proud that he could support a family as a musician of modest means and grateful for the blessings that made it possible, from affordable rent to quality neighborhood schools. “I’ve been very fortunate,” he says.

← Painting the Town Red: A MLK Day Tribute to Billie Holiday Letter from the Editor →