B Sharp Coffee House: Jazz for the New Generation 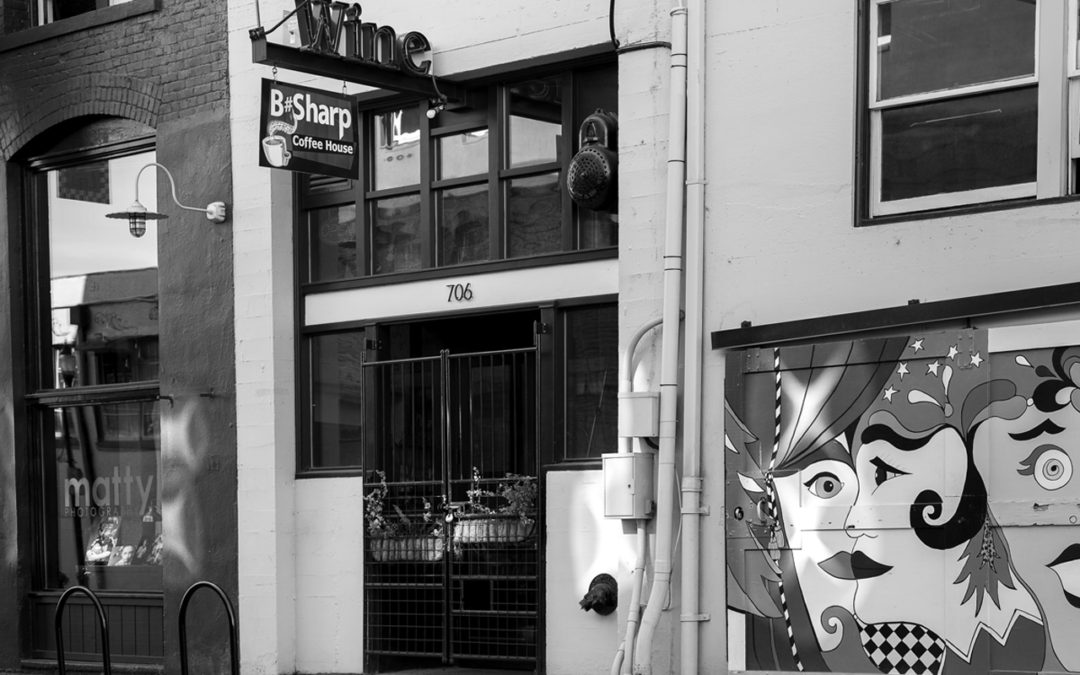 B Sharp Coffee House is situated in an old warehouse that used to house the Tacoma News Tribune.
Photo by Daniel Sheehan.

What sticks out the most about the B Sharp Coffee House isn’t its historic warehouse facade or the quirky, mismatched furniture. Though the unusual, expansive atmosphere is enough to suggest that you have entered the artsy realm of Tacoma, it is not what sticks out.

There are a few mature patrons holed up in a corner, coffee and paper in hand, or tucked away on one of the couches, holding hands in the way of a long and comfortable relationship. But on any typical night, it’s mostly young people in this jazz club: college students with laptops, iPads, and books studying away, small clusters of musicians and fans out for that night’s band, and couples on dates, with flirtatious smiles and bright eyes shining with early evening high hopes.

One of those young people is, in fact, the B Sharp’s manager. With brown eyes and long, curly brown hair, Jesse Nelson is in charge of the business while owner Dennis Ellis is on medical leave. On a recent visit to the B Sharp, Nelson shared his passion for this coffee shop, the jazz genre, and Tacoma’s jazz scene with energy and consistent zeal.

For Nelson, the mix of ages both on and off stage is pretty thrilling. He says jazz is not some “old sound.”

“I’ve always thought,” he ponders aloud, “I was born in the wrong time for it….But when I see people my age up there, performing too, I just get excited.”

The coffee shop has become a watering hole for musicians both young and old. On Friday, April 1, it was the young. 322 Jazz Collective, a bop fusion group of university students made up of Elliott Turner, Josh Bozich, Thomas Horn, BrandonLee Cierley, and Marc Harper, whipped it up that night.

B Sharp owner Dennis Ellis is a veteran of the jazz scene and has been the saxophonist in the band the T-Town Aces. As such, his iPod is filled with jazz and blues, so even when there isn’t a live show happening, the coffee house always has the music, evocative of so many American eras, ringing out over the PA and bringing a rich culture to a new generation of folks. “It’s filling generational gaps,” offers Nelson.

Just as it’s Ellis’ mission to bring folks awesome music all day long, either live or from his expansive personal collection, it’s also his mission “to provide a good cup of coffee.”

And he succeeds in doing just that in his business relationship with local roaster Bluebeard. Itself a proud Tacoma coffee roaster, they feature the finest high-grown Arabica beans. It’s a lighter roast, and the B Sharp pairs it with a traditional coffee menu: no 20- or 24-ounce cups, no upselling with special flavors – just a simple cup of good joe.

Also working with Tacoma tea company Mad Hat, which combines unique blends with high-quality loose leaf tea, and Puyallup-sourced Blue Max Meats, the B Sharp fills out its cafe menu with community spirit. A person can easily satisfy his or her hunger knowing everything is family-run and locally sourced. Although serving local beer and wine as well, the club is happy to remain all-ages and provide a place for those young jazz enthusiasts as well.

Besides being a place for the multigenerational community to gather, the B Sharp also asserts itself as a supporter of the community and its culture, by bringing musicians to this club who in turn “contribute to our city later,” says Nelson.

The B Sharp opened in October of 2013, in the building that used to house the old Tacoma News Tribune. It wanted to place itself in Tacoma as a venue for locals and acts that were just starting out and needed an audience.

And it’s accomplished just that, thanks to a lot of hard work and community partnerships. Ellis established a great relationship with Tacoma Jazz Association, and, in turn, Kareem Kandi and Philip Bradford. Their help and their network, says Nelson, “have really helped us grow as a jazz venue with hosting events here.”

The B Sharp has become a hub because it’s giving locals the music for which they used to have to go out of town.

Tacoma’s jazz scene is blooming. Early in March, for example, the Tacoma Jazz Association presented their successful first annual Jazz Walk, in which the B Sharp participated.

Nelson thinks it’s because jazz has been such a small market share that it isn’t as cutthroat as in some other cities. With less competition, “we have more room to work together,” he says. “There’s more availability to grow as a community.”

Nelson continues, “We do have a lot of people who come in week in, week out…people who know the names of the musicians, who really care not just about the genre, but about the community.”

As much zeal as Nelson has for jazz and the shop, it is a zeal that also lends itself in equal measure to the love for his bosses, Dennis and his wife Maryann Ellis.

“I see his heart in his business,” says Nelson. “He is not about this industry to make a ton of money and retire in the Caribbean.”

“We want people to sit and work in here, to slow down,” he adds. “If we can combine slowing people down, enjoying their experience when they walk in…they can leave, catered to and cared for.”

Maybe it is just this simple, that magical recipe for growing a jazz community: a welcoming atmosphere that makes locals feel like they don’t need to go far to hear some great music. The B Sharp brings the acts Tacoma has been longing for and Tacoma brings the audience – young and old.