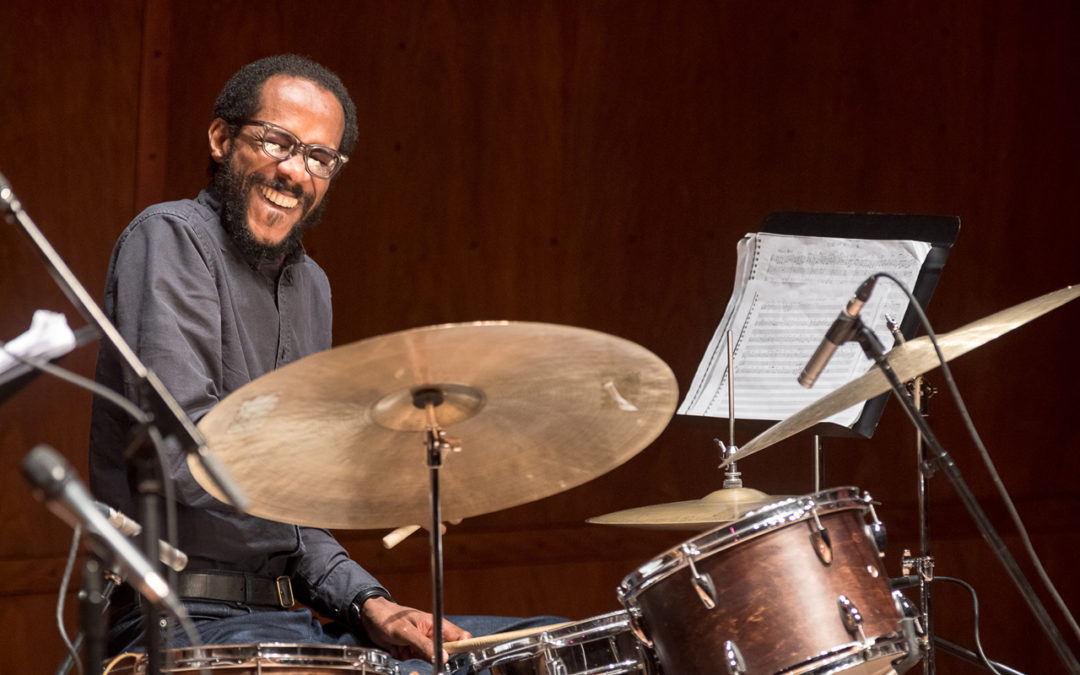 Brian Blade, one of the greats of modern jazz drumming, sets the mood for the 2019 Earshot Jazz Festival with this much-anticipated festival warmup appearance.

Originally formed in 2001 as Subterranean Sextet, Life Cycles boasts two of Blade’s Fellowship Band colleagues, pianist Jon Cowherd, a friend since their days at Loyola University, and saxophonist/bass clarinetist Myron Walden. When the sextet first formed, its name reflected that it mostly played in underground night clubs around Manhattan.

Blade had hoped the band would go into the studio with vibes great Bobby Hutcherson, whom Blade had come to know as a founding member of the SFJAZZ Collective. But before that could happen, he passed away in 2016.

Now, the reformulated band perform originals as well as Hutcherson compositions, particularly from his landmark 1970 Blue Note release Now! The band’s new name, Life Cycles, signifies how life’s roads loop back. In addition to Blade, Walden, and Cowherd, three other Subterraneans are along: Doug Weiss on bass, Monte Croft on vibes and vocals, and John Hart on guitar.

After early albums on Columbia, Croft joined the bands of Branford Marsalis and James Spaulding. John Hart, who teaches jazz guitar at the University of Miami, “can burn his way through blues changes on a level that’s right up there with fellow graduates George Benson and Pat Martino,”(JazzTimes).The sole addition to the earlier band is two-time Grammy Award-winning Brazilian percussionist Rogerio Boccato.

As for Blade, his renown has always been for his inspired, measured, and apt accompaniment to any musical setting. Reared in Shreveport, Louisiana, the son of a Baptist minister, he learned early about fellowship, soul, and—so evidently that it’s worth mentioning—humility. A rich amalgam of grace and warmth runs through his tuneful support of many kinds of music.

He came up in the clubs of New Orleans while studying at Loyola. His mentors were fabled figures in the Crescent City, among them John Vidacovich and Ellis Marsalis.

He formed the Fellowship Band at age 27. By then he was already a firstcall drummer. His credits include not only Wayne Shorter’s quartet, since 2000, but also jazz greats as varied as Herbie Hancock, Chick Corea, Ellis Marsalis, Joshua Redman, Kenny Werner, and Wolfgang Muthspiel. Then there have been vocalists as distinctive and varied as Joni Mitchell, Marianne Faithfull, Emmylou Harris, and Bob Dylan. In 2009, Blade joined the singer-songwriter ranks, himself, with Mama Rose, featuring songs honoring his grandmother and family.

His reputation rests on his keen attention both to what his bandmates are doing, and to what his and others’ compositions call for. In Life Cycles, as in the Fellowship Band, he and his bandmates rein in their considerable technical facility to boost overall emotional depth.

The critics agree. In The New York Times, Nate Chinen called Blade “one of the most unaffectedly charismatic musicians in jazz.”

Tickets and information at earshot.org