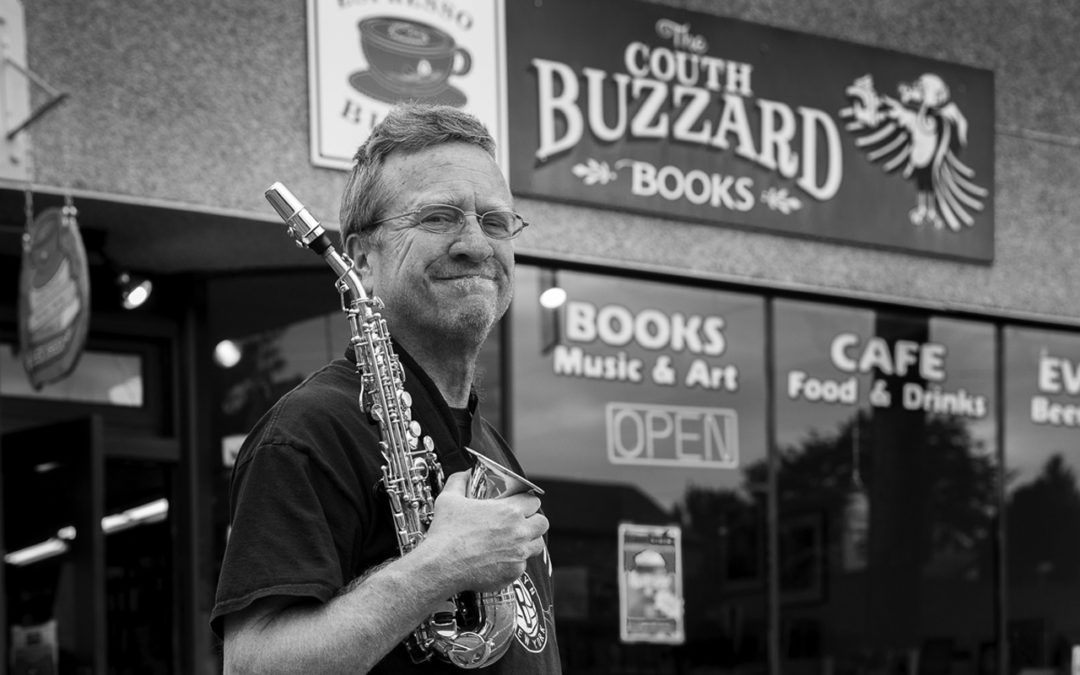 With a sports jacket over his t-shirt and long silver hair, topped by a fedora, Theo Dzielak, owner of Couth Buzzard Books, has the air of a true jazz guy.  And he is. A long time local jazz flutist, and former writer for Earshot Jazz under Paul de Barros, Dzielak’s Seattle jazz roots go back. “Jazz is such a beautiful, evolved music,” he muses, and his love of the art form manifests on a constant basis through his bookstore.

For Theo Dzielak had a vision. Recognizing that the old model for book shops was no longer viable, he designed Couth Buzzard Books to be a hub for community, where folks could come in for not only a vast array of both new and used books, vetted by him for taste and interest, but also for a good cup of coffee and a treat; to meet up with other locals and have a chat; to play games; to form a book club, language group, or New York Times discussion group; or, most important for the local music scene, to play and hear live music.

The model is working. After the shocking Greenwood gas explosion last year that made international news headlines, destroying four businesses and damaging many others, Couth Buzzard Books’ business just continues to grow.

Kenny Mandell, local sax player, teacher, and bandleader, says that the “store itself invites eccentric characters.”  Mandell describes many coffee shops as places for people to sit by themselves with their own laptops, in their own little bubble. But Couth Buzzard Books fosters chance meetings and forge new relationships.

From the moment Dzielak and Mandell met, they became instant pals, and, ironically, it was only much later that they discovered they both had had the same music teacher, Mike Davenport of Tacoma. With a musical collaboration that has grown over seven years, Mandell, a gracious host committed to fostering jazz in the local community, has succeeded at welcoming players of all ages and abilities to their bi-monthly Sunday jazz jam. They also partner in producing an on going First Friday Jazz series, pulling in experienced groups to provide great music at an affordable price.

The upcoming second annual Couth Buzzard Books Jazz Festival is a natural outgrowth of their relationship. As Dzielak says, both he and Mandell had been “thinking about a jazz festival for a long it time.” They chose Memorial Day Weekend last year because many folk musicians, who also gather and play at Couth Buzzard Books, were busy with the Northwest Folklife Festival. And while many music lovers spend Memorial Day Weekend at the Seattle Center, plenty of others look for music in a less crowded atmosphere, and local jazz players are not involved in Folklife.

They were surprised last year with the heavy turnout to their fledgling festival. It was “more successful than we thought it would be,” says Dzielak.

Like the bookstore itself, the festival continues to grow. This year, it offers a variety of both local and non-local musicians. They have structured it in jazz chronology, starting out on Friday night with Orville Johnson and the Swing Years, highlighting jazz from the ‘20s and ‘30s. Saturday offers a feast of vocalists, an Al Hood Tribute band, and a Thelonious Monk tribute, with not just the “everyday Monk tunes that everyone knows,” says Mandell, but some of his lesser heard compositions. Sunday afternoon sees the regular jam followed by an evening of straight-ahead jazz, finishing off with experimental jazz on Monday.

The Couth Buzzard Books motto is: “Building Community: One Book, One Drink, One Note At A Time.” And this Memorial Day Weekend, players and listeners will have a lot of “Notes” to enjoy.

Tickets are available in store, and are $30 for a Festival Pass, $15 for a Day Pass, and $8 for a single event. For more information, visit buonobuzzard.com.