Catching Up With: James Falzone

Catching Up With, March 2017, Profile 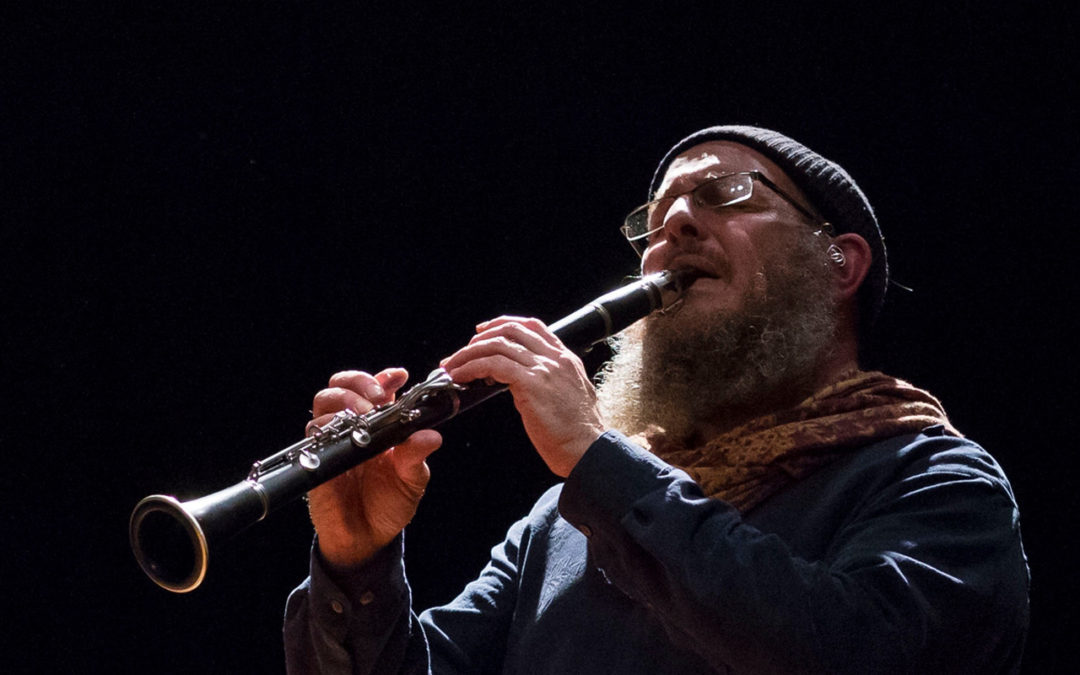 Newly appointed Chair of Music at Cornish College of the Arts, multi-genre clarinetist, and award-winning composer James Falzone wears all the hats, all the time. Falzone feels it’s essential to invest himself in his new community, regularly attending local jams, playing with groups including Wayne Horvitz’s Electric Circus, and creating with improvisational collaborations, including an upcoming Wayward Music Series performance on March 2 with percussionist Bonnie Whiting.

It’s been less than a half year ago since Falzone moved his family here from Chicago, where, for nearly a decade and a half, he had been a crucial part of the local jazz and improvised music scene. The Midwest still holds several spring gigs for Falzone: his Arabic-infused Allos Musica Ensemble will reunite in April; his new project Wayfaring with Chicago bassist/vocalist Katie Ernst plans to release their record this September; a stunning performance pairing Falzone’s compositions with non-disabled dancers and dancers with disabilities tours to St. Louis in May, following its November Chicago debut.

He warmly tells me all this between stormy downpours one afternoon in Capitol Hill, where he also shares how his instrument has allowed him versatility, how he plans to help shape modern musicians, and the importance of showing up:

You’ve called the clarinet “a conduit, though a fascinating one.” What has mastering this instrument brought your career?

It’s not a very old instrument, invented in the late 18th century. In New Orleans, when musicians were beginning to play what we now recognize as jazz, there were clarinets and cornets and drums lying around sort of left over from the marching band period. The instrument has this glorious history in early jazz and swing, but bebop just killed it. It gets a resurgence in the free jazz era with musicians like Eric Dolphy, John Carter, and Jimmy Giuffre.

And that’s where I step back into it. I fell in love with it as a kid, for no particular reason… I have an uncle who is a film composer and fine woodwinds player, and he gave me my first lessons. I quickly realized that the instrument was incredibly versatile. From a young age, I was interested in a lot of types of music – I could study classical, jazz, and world music traditions, or listen to Klezmer, Arabic, and Turkish music, [and it would translate] to the clarinet in ways it wouldn’t with other instruments.

So, that’s what I based my whole career around: exploring the clarinet and my musical interests through a very facile instrument. That said, I’ve said it’s just a conduit, because if for some reason I couldn’t play it, I would switch instruments. Music – and my level of interest in music – is far greater than the clarinet.

You had a plateful in Chicago, including a 15-year collegiate education history, and various roles as a musician. Have you been able to consolidate your energies in Seattle as you had hoped?

It’s interesting how much of my background my position at Cornish brings together. I’ve taught pretty much everything you can teach in music – composition, world music, clarinet, jazz history, theory – and now I’m overseeing people who are teaching those things, so I totally know what they’re going through. I have been able to consolidate which feels really good.

That said, I’m the kind of person who thrives on not just doing one thing. I’m also playing a lot and working on projects outside of Cornish. All these things that I’ve been doing have focused in on my position, but a big part of what I offer this position is that I have such a wide purview and am a working artist and know what it means to be a working musician presently.

One of your current tasks at Cornish is to assess the program and make sure it’s meeting the needs of a 21st-century musician. What do you want to see happen?

Music schools have become very genre-focused. My observation about 21st-century music making is that most genres are obliterated as a working musician. What you’re expected to do, is to do everything. And to do everything well, and even on the same gig perhaps do everything!

I was performing Wayne Horvitz’s music the other night; you had to read, improvise, be able to play very classically oriented, be able to swing, and there were elements that were world music-esque where you had to play in a certain kind of groove. It asked the musicians to do an incredible variety of things.

So, I would like to see Cornish deemphasize genre. That doesn’t mean we don’t study jazz or classical music, but that we don’t pigeonhole students.

Jazz has always been an open container. Rather than funnel students, let’s bring them in wide and keep them wide. Cornish has always done that, but I think we can achieve this in a curricular way by setting up the program and classes one takes to incorporate these ways of thinking.

Is there advice you give to young musicians navigating when to take on opportunities and when to say “no”?

School should not be about career. School is a time for craftsmanship, and that takes time and work, especially in the early years. I think there is a place for any school to be talking about making a living as a working artist in contemporary society, no doubt. But I would rather stop educating if I’m sending musicians into the world who know how to make great press releases, but can’t play, feel, and think.

Going against some contemporary trends in education, I want to find the ability for our students to be more contemplative. We’ll give them tools and help them connect, but the truth is those skills really come when you’re out there. I can tell you about what you should do to get a gig, but I get gigs in the weirdest ways possible and very rarely in the way I tell students to. Great artists have a way of finding work, and I’m interested in Cornish being a place that makes great musical artists.

You and UW Chair of Percussion Bonnie Whiting opened the Improvised Music Festival together the first weekend of February. What can we expect from your and Whiting’s concert March 2 at the Chapel?

Several years ago, Bonnie and I were connected through a mutual friend, but we didn’t meet personally until this past September at the Seattle New Music Happy Hour. She had just started her position at UW, and we bonded over being new to town.

What we’ll do together in March will be all improvised. She’ll do solo pieces that have either been written for her or she has worked up. I’m going to be doing some solo playing, and a piece for six clarinets and saxophones, part of my project “Renga Music,” which is a form of collaborative Japanese poetry. That will feature several local clarinet/saxophone players that I’ve been meeting through playing around town at Vermillion, Racer series, and places I’ve been going to hear music.

With sips left of espresso and some crumbs of nut bread on his plate, Falzone narrated a few personal stories all illustrating his mantra of being a part of the music around you. He resembled the professor from his past in one of the hundreds of undergraduate lessons he’s taught.

“When I was nineteen or twenty and becoming full of myself as you do at that age, my dad and I were walking in a Borders Books,” he tells me. “There was this awful saxophone player playing with a very bad pianist in the corner café on a Friday night. I remember commenting, ‘This is terrible,’ and my dad said, ‘Yea, but they are playing a gig, and you’re walking around Borders with your dad.’”

Falzone laughs that this parental truth encouraged him to scramble and get gigs for himself. Equally, it instilled the importance of being around live music of every medium.

“I’m interested in building and supporting the local community – from large organizations playing concert music to the biggest audiences, to the funky club down five flights of stairs where someone’s playing solo oboe with a balloon on their head and five people are in attendance,” he says. “There are all kinds of reasons to experience live music. Each and every one is a chance to grow.”