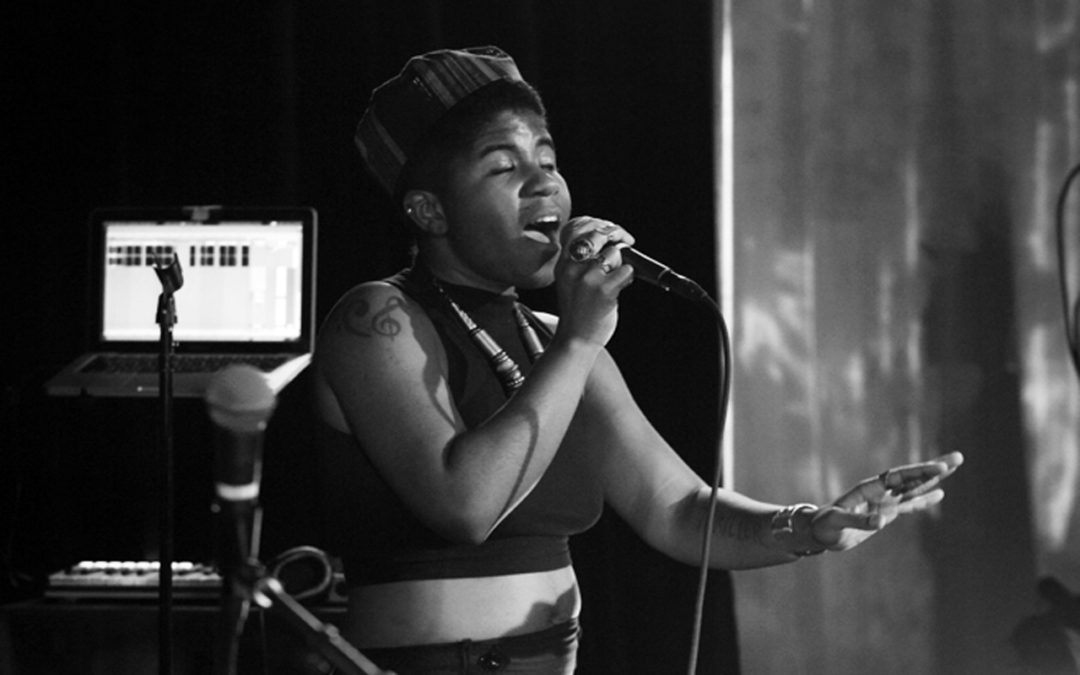 Possessing an earthy vibe with a cosmic outlook, balancing emotional vulnerability with confidence and swagger, Catherine Harris-White, aka SassyBlack, is mapping a musical cosmos all her own.

Earshot Jazz: Tell us about the album, New Black Swing. Do you think of it as a tribute, or more of just a touchstone?
Catherine Harris-White: I listened to a lot of the records, and I tried to break down the science to creating those songs…I don’t think I could ever recreate entirely New Jack Swing, because I’m not from the places they were from, I didn’t live in that time — I was a child — so it’s more paying homage to that.
Is your SassyBlack identity a way for you to separate from or expand on what you did previously with THEESatisfation? Along with the hard beats, there’s a real vulnerability to the music, and some soft edges. The whole process of me becoming SassyBlack has been about self-awareness, and just learning more about myself as a musician and as a person.…I had to dig down deep in myself for that for this record, because I have been so entangled in the hip-hop world…I was so nervous to be just a singer, just sing R&B songs. I studied jazz at Cornish, and I’ve always wanted to sing jazz and R&B, always, always! And when push came to shove, I just kind of got scared. SassyBlack is about letting my voice ring through as a singer, and then writing these songs that are really vulnerable, letting people know how I feel.

Do you find yourself trying to work against singular categories that people want to fit you into, whether it’s “queer girl of color” or “hip-hop” or some other label?
As somebody who has to market themselves all the time, since I do everything on my own, I have to think about those labels, and to an extent, I created those labels. I defined myself as those things, early on, to get to where I wanted to be.…Now, there’s good and bad sides to that. I feel typecast in some ways: “Oh, she just does hip-hop.”

Talk a little bit about your relationship with jazz, and how it’s influenced your music.
It’s how I stylized my voice. It’s what I listened to, like Ella Fitgerald and Sarah Vaughn, Bessie Smith, even Chaka Khan. That really inspired me, to know that my voice can sound like anything, and if I forget the words I’ll be okay, I can scat and just make up something else [laughs]. The freedom of jazz is what inspired me.

You have a gig coming up with Roy Hargrove at London’s Jazz Café in October. Is that a new type of exposure for you?
I’ve never opened for anyone like that. The jazziest cats I’ve opened for are like Erykah Badu, and more recently Bilal. I was talking to Jazz Café about performing there, and they said, “Would you want to open for Roy? Is that too jazzy?” And I said, “Nothing’s too jazzy for me! I would love to!” [laughs] I have so many songs, I can cater it to any set. I’ve opened up for Sleater-Kinney! I could open for pretty much anyone.…People are starting to figure that out, and I’m super grateful.

It can be daunting to perform completely alone can’t it? How do you approach that challenge?
In a way, you’re always on stage by yourself. You always have to know your stuff, right? The only difference is now you’re not interacting with another person you’ve been rehearsing with, you’re interacting with the audience. I’m always interacting with the audience, they’re my band. I tell them that all the time: “You guys are part of the show now,” and we do call and response.
How does being from Seattle figure in to your music?
I love being in a place that has so much ‘secret soul’ to it. I tell people that Quincy Jones used to live in Seattle, Jimi Hendrix lived in Seattle, and people are like, “What? Really?!”

There’s more to it than grunge.

People don’t expect me to be from Seattle, even though I tell them every time as soon as I get on the mic. I say, “Yeah, Seattle has music like this!” So, I think it’s a hidden treasure.

New Black Swing is out June 23. For more information on SassyBlack, visit sassyblackmusic.tumblr.com and sassyblack.bandcamp.com.

← Jazz: The Second Century 2017 Series Letter from the director →