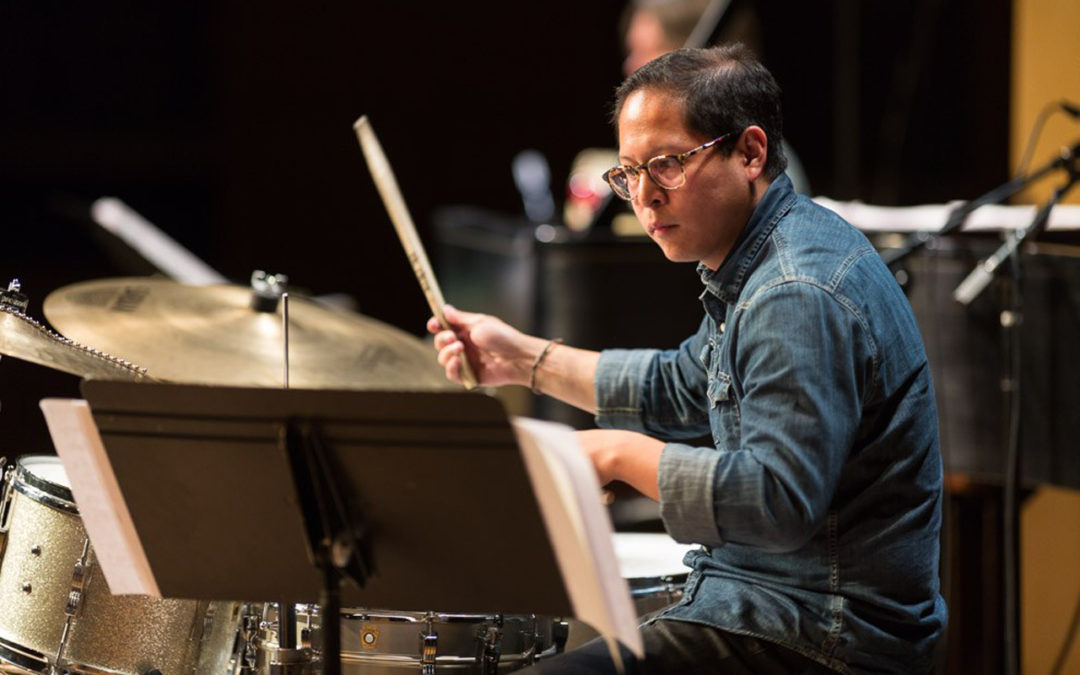 Christopher Icasiano is a Filipino-American percussionist and composer who’s had an undeniable impact on Seattle’s jazz scene, both as a musician and community organizer. We caught up while he’s been on the road and chatted about his upbringing and influences, activism, fatherhood, and current projects.

Growing up in Redmond, Icasiano’s parents often brought him to jazz concerts and to the Seattle Symphony. He started playing drums when he was eight years old. In the 1990s, his wheelhouse was hip-hop and R&B, but he loved the Dave Holland quintet and fell in love with the drumming style of Jack DeJohnnette, who sounded “so free and yet in control and command of the instrument, with a strong jazz vocabulary but who could clearly play whatever he wanted.”

Later in his music career, Icasiano got more into experimental and free improvisation, which he finds the most expressive in music. He “infuses personality and emotion” into what he’s playing, regardless of the genre. His first musical project outside of a jazz band, Speak, was in college at the University of Washington. He and his fellow students were trying to fuse free improv into pop and rock. Icasiano notes that while many modern drummers are great technicians with impressive chops, they are lacking in a unique sound and expression at the kit.

During the pandemic everything shifted. He had just put out a drum-centric album in 2020, only to have to cancel those tour dates through spring and summer. Like many artists, this affected Icasiano, not only as a solo artist but as a new father. Racer Sessions and Table & Chairs (both organizations of which he’d co-founded) were forced to go on hiatus and later into Zoom.

But lately, he’s been able to go back on the road, playing various genres to keep him in balance. He notes, “Each project’s learning process is transferrable to other realms. Jazz influence fuses into pop and rock, and vice versa, bringing a nice groove into experimental improvisation.”

He also defines himself as a community organizer committed to anti-racism. As Earshot’s board president, Icasiano has lent his varied expertise to the bettering of the organization. Through Racer Sessions and Table & Chairs, he’s been able to curate and book shows increasing representation of marginalized communities.

I have been a musician of color surrounded by white audiences and musicians my entire life feeling like I didn’t quite fit in. So I wanted to be able to use curation and community work to bring people together and book something I saw myself playing in. I wanted more diversity in lineups and I wanted to create a space where I felt safe and seen. People in privilege can rely on that privilege to put them in places where they feel seen and heard. I had to take things into my own hands to build and foster a community I want to see myself in because no one was going to do it for me. Now that I have a child, the scope of that work is for me but also for my kid—to help build a community for them where they don’t feel like an outsider.

When asked about the difference between his career now as opposed to his youth, he reflects, “So much of my early career was about exploring and needing to try everything in order to decide what I liked and didn’t like. And, to realize that I needed diversity in what I played and do, so nothing becomes stale or un-fun.”

Fortunately, Icasiano is in the position to choose gigs with those who make him feel comfortable and is soon embarking on a U.S. and European tour with local legends, Fleet Foxes.

If the people I’m doing [music] with are not great or if the situation is toxic, then it is not worth the suffering. But, I know that even that is a privilege of my current success and not something musicians starting out can really adhere to every time. I’ve learned how to communicate my needs on the road. Being in a band with 6 people in close quarters, everyone is tired, and everyone has different needs. I need to feel comfortable and safe to advocate for myself. If it’s not comfortable, then it is not sustainable. Helping friends understand the effects of systemic racism has also created a lot of allies; I work with people who will look out for me.

Though Icasiano has stepped back from a leadership role in the Racer Sessions (now led by friend and close collaborator, Haley Freedlund) he will always have a place in its history. The Racer Sessions, a creative and safe bi-weekly meetup space for improvisational jazz, has even expanded to New York by musicians from Seattle who started the new group, Racer East.

Being on the road right now still feels “wild” to Icasiano after spending the last few years in quarantine. But that won’t stop him from hitting the road to tour with Shannon and the Clams, Fleet Foxes, Pure Bathing Culture, and Bad Luck.