Industrial Revelation: Toward an “Everything” Music 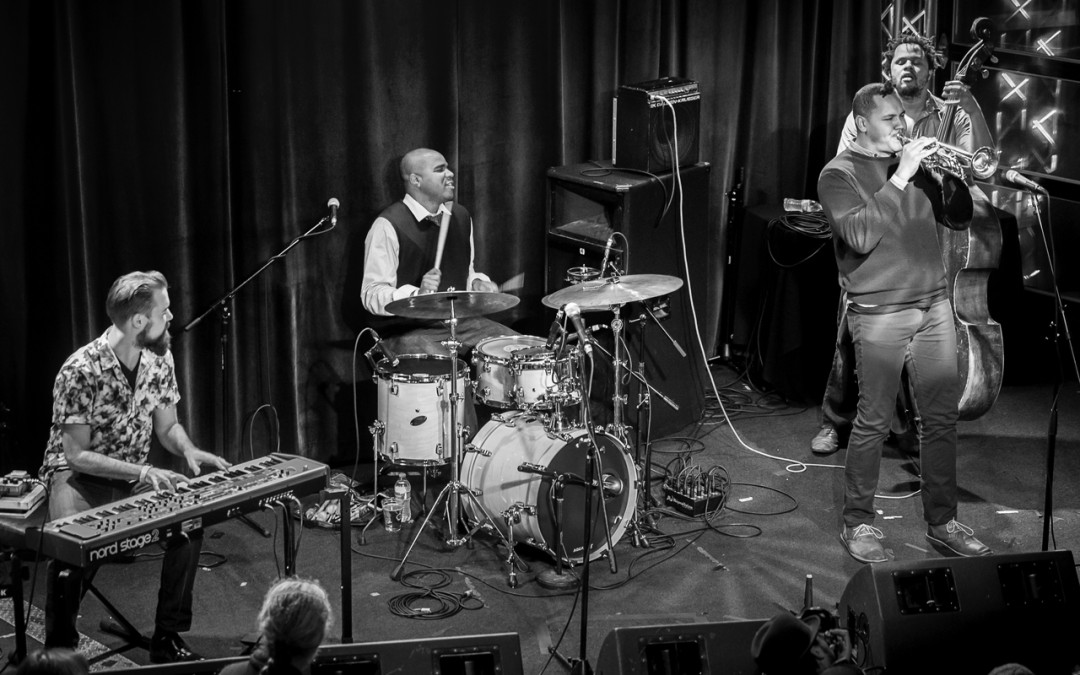 “When we first started playing, I thought, this is ‘everything music.’”

Industrial Revelation is not a musical entity easily pinned down, but keyboardist Josh Rawlings’ invocation of “everything music” points in the right direction. Rawlings and his bandmates Evan Flory-Barnes (upright bass), D’Vonne Lewis (drums) and Ahamefule J. Oluo (trumpet) joined me on a recent afternoon to ponder the myriad possible ways to define what this singular quartet is all about. Earshot’s John Gilbreath, who has championed the band since they first hit the scene, has a take: “To me, the genius of Industrial Revelation is its inherent ability to obliterate imagined walls between genres and camps of music lovers.”

Spend some time hanging with these creative co-conspirators and it’s easy to see the obvious affection and mutual respect they have for each other. As they crest their 10-year anniversary as a band (with no personnel changes), the members of Industrial Revelation speak about the group as a brotherhood, in almost spiritual terms. Flory-Barnes says of their first jam, “I thought we were just getting together to play and see what happens, but from that first moment, it was a ‘thing’…It just felt natural.”

The band has always functioned intuitively, without musical conflict. This is only possible when a very special chemistry is shared. Oluo explains, “Expressing yourself involves trust, knowing that people are going to be there to understand what you’re trying to express.…Everyone in the band is engaged as a primary partner in the music. That’s the way that every song has worked since we started.”

The band members all keep busy with a slew of sideman gigs, and Oluo also maintains a vibrant career in stand-up comedy and theater, but Industrial Revelation remains a central commitment for all four. Rawlings sums it up: “This music fed my soul and my heart.…We do have to juggle. It isn’t easy, but it is easy to say yes to doing music that we love.”

The spirit is only getting stronger – and to prove the point, the band has just released Liberation & the Kingdom of Nri, a two-CD set covering a dizzying rainbow of styles and moods. In an era dominated by short attention spans and YouTube plays, the notion of a double album is bold, almost a throwback. It’s a challenge issued, both to the artists creating it and to the listener. Industrial Revelation is clearly up to the task.

The “everything” notion pops up again, as Oluo elaborates: “There is a conscious attempt to make it an ‘everything’ album, to embrace that concept.…We’ve amassed knowledge, we’ve amassed material and history. We can present a big picture.”

What’s also notable about the album is that the band is clearly following their hearts, not chasing trends. Oluo says they approached collaboration “in a very non-analytical way. A very thoughtful way, emotionally, but we don’t really get into creating a ‘strategy’ to approaching a song.”

When we spoke, the band was preparing for a West Coast tour, and, for a unit that operates in a spirit of vibe and interaction, it’s no surprise that the live experience is spoken about in modes of transcendence. Rawlings says, “We want everyone to be involved. I don’t get super into the ‘woo,’ but you can’t deny an energy in the room, with the sonic vibration and people pouring love at you.”

Oluo chimes in: “We’re always searching for our own humanity on stage, and when you do that, you’re getting to the core of other people’s humanity.…If you find something real and you get it out, people will feel that.”

For an “everything” band like Industrial Revelation, finding the right venue can be a delicate art. There’s no obvious pipeline or well-worn path through a particular scene, and the band’s spirit of inclusion draws a varied audience.

Lewis adds: “People will say, ‘You should play here, this is a big venue.’ But is it a hang? Is it a good vibe?”

This search for the right vibe enables the band to be successful playing gigs in often-unconventional venues, from warehouses to shopping malls. As Oluo points out, “It doesn’t matter where it is, you can have a great show anywhere.”

The band is outward looking, but their commitment to the Seattle scene is palpable, and they pay tribute to the astounding range of Seattle music history. After invoking Jimi Hendrix, Quincy Jones, and Shabazz Palaces, Oluo elaborates, “There’s as much Alice in Chains in what I’m doing as there is Louis Armstrong! … I feel a bond to Seattle music. The grunge era was during my early teenage formative years – I usually wear flannel to this day! [laughs] To know the streets…to know the schools that those people came out of, there’s something special about that.”

Flory-Barnes adds, “All the eras of Seattle music, high points ranging from the Jackson Street days, the early days of jazz, to the Wheedle’s Groove days…that’s all in our music.”

Genre agnosticism aside, Industrial Revelation will no doubt continue to find themselves appointed as ambassadors to run the “jazz” gauntlet. This is a role well-cast: A durable and repeated band story is of fans telling them “they didn’t think they liked jazz, but are now inspired to dig in to other realms of the music.”

Oluo remarks, “We’re on the verge of a really interesting time for jazz. I was afraid of the label ‘jazz’ for a long time, and now I feel like I can embrace it again.”

Rawlings provides a final thought: “I think jazz in a sense is an ‘everything music.’ It’s more of an idea, of freedom of expression.…To be a vehicle to go deeper into any style of music that we really want to.”