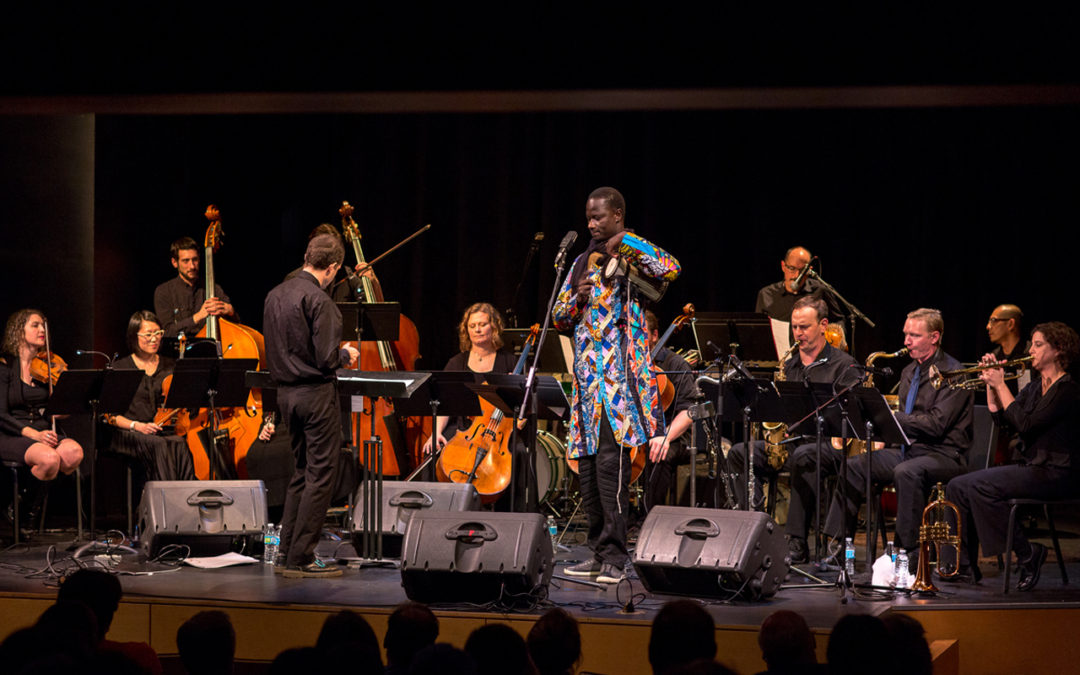 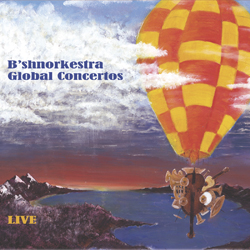 Under the direction of conductor Joshua Kohl, the project opens with a freedom song inviting the Hindustani vocals of Srivani Jade. Lyrically based on a visionary poem of a united world and spiritual unity, the musical landscape of “Prarthona” evolves to include modal transitions and melodic lines passed between instrumental voices.

The third piece showcases the tradition of Greek clarinet, bringing the talents of Christos Govetas front and center of Boshnack’s brilliant blues-inspired composition. “Concerto for Christos” weaves around an entrancing drone of bass and cello, pizzicato texture, and open horn harmonies, before Govetas leads the band into an illustrious and contemplative celebration.

Concluding the album is Boshnack’s stellar jazz trumpet concerto featuring the prolific Thomas Marriott. Timeless harmonies abound, and atop them Marriott sends chills with upper register lines and expressive phrasing all his own.

A sense of boundless – and borderless – creative improvisation infuses Boshnack’s cinematic compositions; her musical feat cannot be overlooked or overplayed. 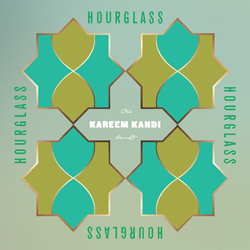 Saxophonist Kareem Kandi – Northwest favorite and a key figure in Tacoma’s jazz scene – is known for his classic tones and straight-ahead approach. When joined by the rich harmonies of B3 organist Delvon Lamarr and the rhythmic punctuations of D’Vonne Lewis, a be-bop soul force is born.

A versatile jazz/funk trio, The Kareem Kandi Band has self-released a new album Hourglass, a balance of three originals and three remakes of popular standards (John Coltrane’s “Impressions,” Hoagy Carmichael’s “Stardust,” and Josef Myrow’s “You Make Me Feel So Young.”) The boys come out of the gate with a juicy, funk-filled version of “Impressions,” as if Coltrane were to have combined visions with Reuben Wilson. By the third track “Curvaceous,” they’ve channeled a more playful, R&B spirit.

The group embraces mellow vibes on both the killer rendition of “Stardust” and “Hourglass.” Kandi’s warm tone sings the timeless melody of “Stardust,” and Lamarr adds a fresh spin with lush organ chords. On their title track, Lewis mesmerizes with snare rolls and a Latin-influenced groove.

“Guess Again” is a tight funk anthem the group has been performing together since last summer (including a feature on KNKX radio), making for a rock-solid and memorable recording. Kandi’s soulful riffs are perfectly balanced by Lamarr’s slick basslines. A noteworthy bridge blends into a buttery organ solo, where Lamarr is complemented by Lewis’ gregarious interplay.

The band brings it home with their swinging up-tempo version of “You Make Me Feel So Young,” twice Myrow’s original tempo. The trio more than proves themselves of their top-notch be-bop abilities, all the while playing with ease and an unteachable chemistry. 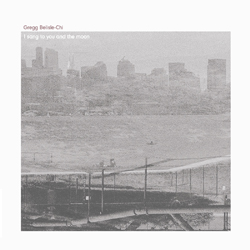 I Sang to You and the Moon

Guitarist and composer Gregg Belisle-Chi has emerged as one of the Northwest’s most creatively dexterous musicians, intuitively spanning varied scenes from improvisational chamber music to the experimental edge of pop/rock songwriting. Informed by jazz but evading direct connections and conventions, Belisle-Chi’s work shares some sonic and conceptual territory with his own recent work in Andy Clausen’s Shutter Project as well as occasional mentor Bill Frisell.

Belisle-Chi’s superb new album, I Sang to You and the Moon, builds on elements he began to explore in his 2015 debut, Tenebrae: a literary and harmonically sophisticated, almost spiritual approach to songwriting. Both albums share a patient, ethereal quality, but Tenebrae occupied a more somber and austere space, while the new album dwells in more warmly earthy realms.

Belisle-Chi’s new compositions are set to the words of iconic American poet (and folk singer) Carl Sandburg. The music explores approachable tonalities and melodies while following the contours of the words and their own peculiarly winding logic. The songs are uniformly beautiful, powerful, and memorable, whether exploring more eerie suite-like cinematic moods (“Dream Girl”) or elemental heartland trance (“Bringers”). There is something inherently powerful about a technically skilled and ambitious composer/musician applying his efforts to focusing and simplifying, as I Sang to You and the Moon poetically demonstrates. 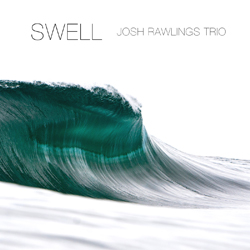 The secret sauce of the trio is perhaps their ability to steadily transition in and out of multi-genre inspired grooves resulting in layers of subtle sonic variation. Their song selection and pacing make Swell one of the most listenable records I’ve heard this year.

In a nod to West Coast cool jazz legend, Rawlings sings original lyrics to the classic Paul Desmond “Take Five.” His compositions “Alone” and “Seatown Swing” feature Gabriel Burbano on the trumpet providing his characteristically soulful, even wistful touch. Isabella Du Graf’s sweet coos are ear candy in the upbeat composition “You Are The Reason,” while Jessie Sawyers’ rhythmic dancing cruises forward on “Wave.” Rawlings also reveals a more personal side singing together with his wife Emily in a sentimental ode to his daughter “Freja.”

Swell also features several popular songs including Stevie Wonder’s “Pastime Paradise,” Weezer’s “Undone” and “Say It Ain’t So,” and a Seattle favorite, Nirvana’s “Smells Like Teen Spirit.” Rawlings delivers his cool and dark textures for these covers a la Ethan Iverson (The Bad Plus).

← On the Scene: Jam It Up! 28th Annual Concert of Duke Ellington’s Sacred Music →