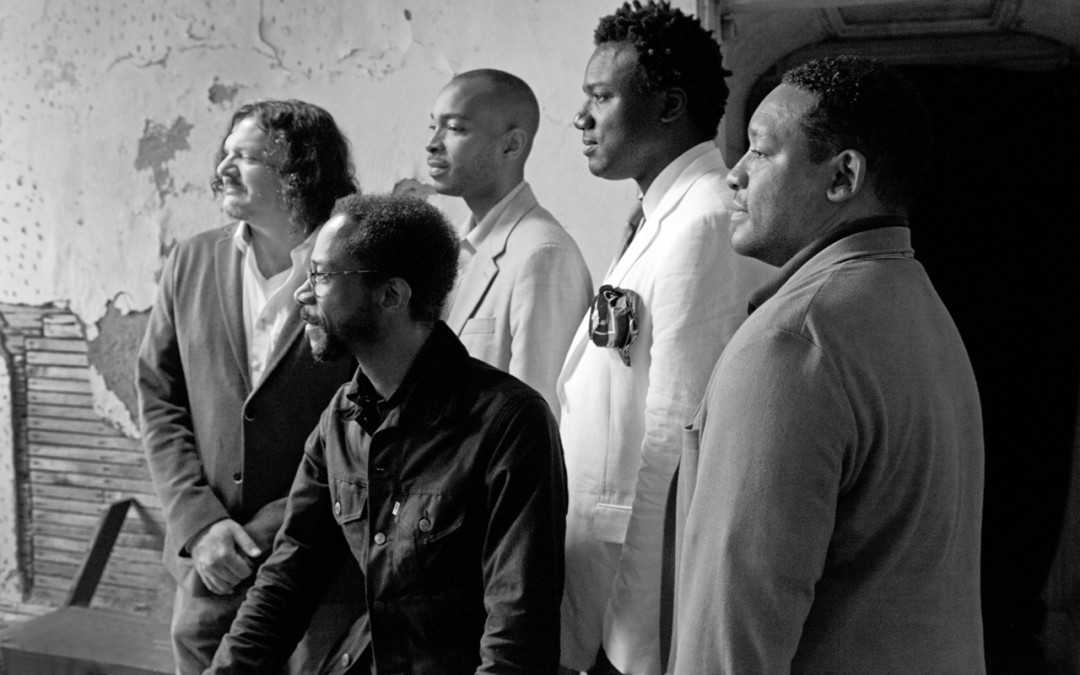 Tuneful, stylish, and imaginative, the unit takes its lead from one of the most solid percussionists in the business, and one who is keenly attentive both to what his bandmates are doing, and to what his compositions call for.

A spirit of collective undertaking establishes the “fellowship” of the band’s name. Pianist Jon Cowherd, Myron Walden on alto saxophone and bass clarinet, Melvin Butler on soprano and tenor saxophones, and Chris Thomas, on bass, all respond in kind, and the result is a stylistic cohesion that makes for riveting listening.

That quality was evident on the band’s 2014, Grammy-nominated release, Landmarks, which was its fourth, and a return to the Blue Note label which had issued the Fellowship Band’s self-titled 1998 debut as well as Perceptual, in 2000.

In a review of Landmarks in JazzTimes, Geoffrey Himes suggested that Blade’s evident humility – “you don’t even hear his drums until more than two minutes into the second track, and they don’t take the foreground until the beginning of the sixth track” – is in keeping with his long tenure in the band of a similarly self-effacing leader, Wayne Shorter.

It was, Heim wrote, “a testament to Blade’s leadership that his fellow musicians rein in their considerable technical facility” to boost the emotional depth of the band’s pieces. “This is not,” Heim wrote, “an album of young musicians trying to prove how many notes and changes they can play within eight bars; this is a session devoted to milking all the emotion lurking in the hymn-like melodies and wistful tempos.”

The music of Landmarks was a special instance of the harmony of the Fellowship Band’s repertoire: as the album’s name suggested, the project took inspiration from a sense of place, Shreveport, Louisiana, where Blade grew up, and the album was recorded. Blade told DownBeat that he deployed a mix of through-composition, poetic short pieces, and long “landscapes” to create a sense of travel about a location. “I like the journey aspect of Landmarks” – the “trip” that the tunes created.

He also emphasized his pleasure in taking that trip with such able bandmates: “I try to write what I have discovered and realized with as much clarity as possible, while thinking of the band. When they play it, all this rhythm, melody, and harmony becomes alive, and other ideas reveal themselves.”

On Landmarks, the sojourning was marked by the forms of music that have resonated during the history of the region around Shreveport, where the drummer was born, in 1970 – rich vernaculars of jazz, gospel, blues, and rhythm-and-blues that have generated rich, fresh vernaculars distinctive to the region.

Blade was raised in Shreveport, too – on gospel at the Baptist Church his father led for half a century. At first, he played violin, but switched to drums in middle school. After surveying the classics of jazz modernism, at 18 he moved to New Orleans for studies in the clubs of the music-drenched city.

Five years in the fertile Crescent City set Blade up not only to lead his Fellowship Band, which he formed at 27, but also to be a first-call drummer for a host of leaders in various genres. His credits include not only Wayne Shorter’s quartet, since 2000, but also partnerships with jazz greats like Herbie Hancock, Ellis Marsalis, Wolfgang Muthspiel, Marc Johnson, and Bill Frisell, as well as singers as distinctive and varied as Bob Dylan, Joni Mitchell, Marianne Faithfull, and Emmylou Harris. In 2009, Blade even joined the singer-songwriter ranks, himself, with his album Mama Rose.