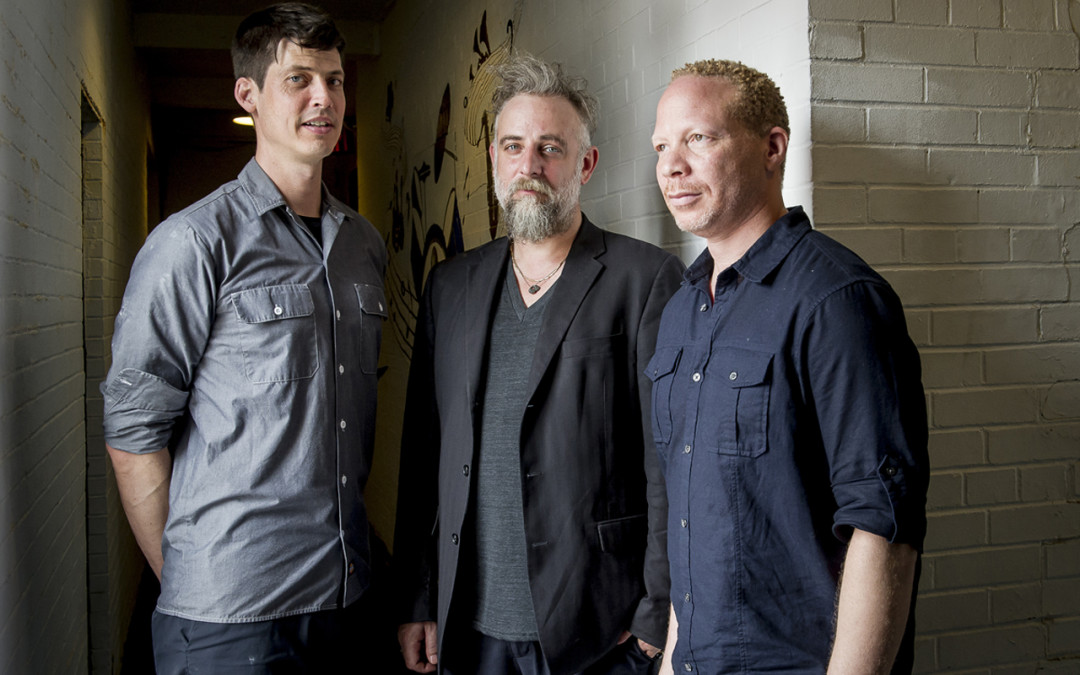 Ches Smith, one of the most exciting drummer/composers on the fertile Brooklyn jazz scene appears here with veterans of the jazz vanguard (and his ECM release The Bell), Craig Taborn (piano) and Mat Maneri (viola).

What started as a one-off gig turned into a collaboration that “really clicked,” according to Smith. “It worked so well that it felt like I had to continue with it.”

The collaboration of Smith, Taborn, and Maneri drew positive critical reactions even early on. After the trio’s appearance at the 2014 Winter Jazzfest, Chicago Reader’s Peter Margasak said, “The best thing I caught all weekend was a superb trio led by drummer Ches Smith with pianist Craig Taborn and violist Mat Maneri, which expertly infused seductively draggy, narcotic writing with a mixture of brooding melody and rich texture. The band had sheet music, but it seemed to offer a loose road map rather than a strict score.”

The fruit of this collaboration is the album The Bell, out now on ECM Records. The title song is one of the very first pieces Smith wrote for the new group, and it’s almost a blueprint for what follows on this album of chamber music for master improvisers of wide experience.

Smith began playing in grunge, punk, and metal bands before exploring jazz and free improvisation, although he counts Thelonious Monk amongst his earliest influences. At Oakland’s Mills College, he studied with Pauline Oliveros, Alvin Curran, Fred Frith, and William Winant. He’s since worked with musicians from Wadada Leo Smith to Tim Berne and Mary Halvorson. The Bell is his first ECM release as bandleader.

Violist Mat Maneri has been recording for ECM for 20 years, starting with Three Men Walking in 1995 with his father, the late saxophonist/clarinetist Joe Maneri, and guitarist Joe Morris, and most recently Transylvanian Concert with pianist Lucian Ban. Having studied with Juilliard String Quartet founder Robert Koff, Maneri’s improvisations are informed and grounded by his knowledge of contemporary and classical composition, as well as the jazz tradition.

Craig Taborn made his ECM debut as a member of Roscoe Mitchell’s “Note Factory” on Nine to Get Ready in 1997, and has since recorded for the label with Evan Parker, Michael Formanek, Chris Potter, and David Torn. Outside of a few gigs, Taborn hadn’t played much with Smith before the formation of this trio, but the value of the collaboration is evident in every moment of The Bell.