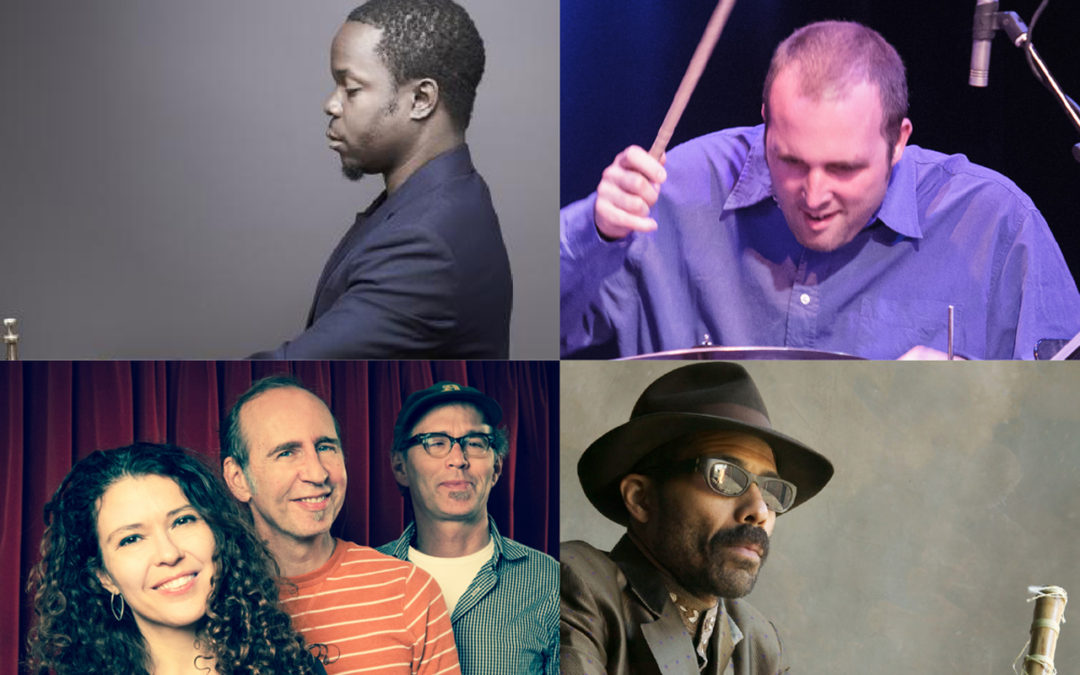 A trio with a career spanning four decades of collaboration and exploration, BassDrumBone is celebrating that achievement with the release of their new double-album The Long Road. The group, consisting of Mark Helias on bass, Gerry Hemingway on drums, and Ray Anderson on trombone, will be touring the US, Canada, and Europe showcasing their latest work and providing audiences with a chance to see a group of musicians that have developed a definition of jazz that can only come from many seasons and many stories.

The uniqueness of this trio is, of course, more than just the longevity of their partnership with one another. BassDrumBone, whom first played with one another in the fall of 1977, represent a collective of singular and specialized musicians who artfully present their craft with the simple palette of double bass, drums, and trombone. Their music draws from traditions of jazz while simultaneously allowing for the freedom to push just what that tradition means in the evolution of jazz; you can’t help but engage with the individual musician and their participation in the group as a whole, each player bringing a specific and intrinsic piece to the puzzle that is BassDrumBone. From Anderson’s ability to “get a lot of the human voice into his trombone,” as Kevin Whitehead said in his recent review on NPR, to Hemingway’s utilizing every dynamic element of his drum kit to “react and provoke [Anderson]” and bring about an air of the mystic and maniacal to his performance, to Helias, who maintains the structure while bringing in tasty background melodies and holding down the pace with texture and swing, these artists converse in a dialogue of musical interplay within improvisation and composition that allows them the ability to create a language anyone can appreciate and everyone should try to understand. Don’t miss their appearance at The Royal Room to hear the continuation of this conversation that has lasted these 40 years.

Earshot Jazz is pleased to present award-winning trumpeter and bandleader Ambrose Akinmusire for the first time since his stellar performance at the Seattle Art Museum in 2014. The quartet will feature pianist Sam Harris, bassist Harish Raghavan, and drummer Jamire Williams in this dynamic presentation at Cornish College of the Arts’ PONCHO Concert Hall.

This month marks the release of the quartet’s expansive new double-album, A Rift in Decorum: Live at the Village Vanguard, on which Akinmusire reaches a new pinnacle as he and his longtime bandmates join a distinguished strata of jazz artists who’ve made live recordings in the hallowed New York City venue.

An Oakland native, Akinmusire (pronounced ah-kin-MOO-sir-ee) started in high school jazz band at Berkeley High before propelling full-force into the jazz scene after catching saxophonist Steve Coleman’s attention. He has since been on international tours, obtained a master’s degree from the University of Southern California, joined Blue Note Records, worked with jazz icons including Esperanza Spalding and Vijay Iyer, and even contributed to famed hip-hop artist Kendrick Lamar’s 2015 album To Pimp a Butterfly. Akinmusire has produced widely recognized albums the imagined savior is far easier to paint and When the Heart Emerges Glistening, and continues to evolve his music through varied orchestration and experimentation both instrumentally and through the relevant social anthropomorphic climate of the time through which he is inspired. His unique compositions have earned him grants and commissions from the Doris Duke Foundation, the MAP Fund, the Kennedy Center, and the Monterey Jazz Festival.

Dallas native Sam Harris studied classical piano and was competitive locally and statewide before discovering jazz in high school. Harris currently resides in NYC where he performs with bands led by Ben Van Gelder and Logan Richardson, and has toured regionally and internationally.

Raghavan, at age 8, began studying Western and Indian percussion before switching to double bass at age 17. He has worked with a number of established jazz greats including Gerald Clayton, Rodney Green, and Aaron Parks, and has made a name for himself in the New York and national jazz scene.

Texas native Jamire Williams went to the Grammy award-winning high school of The Performing & Visual Arts of Houston, Texas as well as The New School in NYC where he obtained a BFA in Jazz and contemporary music. He has toured, performed, and recorded with world-renowned artists including Solange Knowles, Robert Glasper, Corrine Bailey Rae, Terence Blanchard, and Christian Scott.

Supported in part by an award from the National Endowment for the Arts through the Western Jazz Presenters Network.
Tickets $22 general / $20 Earshot members & seniors (60+) / $10 students & military/veterans. Tickets available at earshot.org.

Earshot audiences have already had a chance to hear the singular musical voices of drummer Nick Fraser, pianist Kris Davis, and saxophonist Tony Malaby, whose collective energy and striking kinship was recorded on their “grand slam” (Peter Gough, The Free Jazz Collective) 2015 album Too Many Continents. The trio features compositions by Fraser and improvisations by the group.

Composer and drummer Nick Fraser, a fixture of the Toronto progressive jazz scene since 1995, has led projects including the cooperative group Drumheller, Ugly Beauties, Peripheral Vision, the Lina Allemano Four, and Titanium Riot, and is one of the founding members of the Association of Improvising Musicians in Toronto.

What critic Mark Miller describes as Fraser’s “feeling for economical gestures and innate sense of form” is a suitable match for prolific New York-based pianist and composer Kris Davis. From her acclaimed trio with John Hébert and Tom Rainey (which performed at the 2015 Earshot Jazz Festival), to work with Paul Motian, Mary Halvorson, Bill Frisell, and her recent duo with Craig Tabor, Davis’ experience and wide palate of influences show through her playing’s exacting adventurousness.

Saxophonist Tony Malaby’s playing, both fluid and fierce, low-down and operatic, has also brought new, harmonically rich tests of expression to New York.  Based there since 1995, Malaby has played with notable groups such as Charlie Haden’s Liberation Music Orchestra, Paul Motian’s Electric Bebop Band, and Fred Hersch’s Trio +2, as well as a leader himself. His debut Sabino made the New York Times and Philadelphia City Paper’s top 10 jazz lists for 2000.

These veteran leaders’ long years of friendship show through their ensemble’s astonishing synchronicity, compositional unity, and swing, making their collaboration an extraordinary chance to hear new musical ideas in their fullest and most thoughtful expression.

At long last, New York-based, Swiss-born pianist Sylvie Courvoisier brings her much-anticipated jazz trio to Seattle. Consisting of Kenny Wollesen on drums and Drew Gress on the bass, this group is the result of years in the making for Courvoisier. Though she has formed several trios in the past, this is the first firmly planted in the tradition of the classical jazz trio format of piano, double bass, and drums, a formidable format that represents the roots of jazz tradition and its history. In her new incarnation, she represents not just the traditions but also the constant reimagining and experimentation that jazz requires.

On their debut record Double Windsor, consisting of nine original compositions, the trio does just that, residing “somewhere between written and improvised music, a hybrid of contemporary classical music, jazz, and the avant-garde,” writes music critic Greg Buium. The title track has an intensity and ingenuity that showcases the compositional skill of Courvoisier and the dynamic improv of Wollesen and Gress. Highly rhythmic, the track is anything but typical. It chugs along in a way that feels comfortable at times and then completely unsettling at others, a relationship of tension and release grounded by coordinated composition and the conflict and resolve of skilled improvisation. When reading about Courvoisier there is one word that always comes up: technique. One listen to her music and all will understand, she is not a pianist that adheres to any style; rather, she pulls technique from classical forms, jazz improv, and avant-garde exploration to present something truly unique.

A recent visitor to Seattle with his Ethnic Heritage Ensemble, mesmerizing his audience with his spiritual creative approach, percussionist Kahil El’Zabar returns in collaboration with world-renowned saxophonist David Murray.
Kahil El’Zabar, recognized as an inexhaustible musical creator, embraces an artistic language which bridges ancient African music and instrumentation with the modern world, bringing to life a singular and wonderfully engaging sound. El’Zabar says, “The spirit of one’s approach comes first before the technical. All the facility in the world with nothing that comes from the heart doesn’t make good music. The basis of the strength of any artistic evolution has come from ethnicity.”

El’Zabar was born in Chicago, growing up in a South Side neighborhood where he heard music in the streets. Attending Lake Forest College, he was given the opportunity to attend the University of Ghana and study African music firsthand. He joined Chicago’s Association for the Advancement of Creative Musicians, and by 1975 he was chairman of the visionary organization.

Composer, arranger, and bandleader David Murray’s fiery passion and bold and unparalleled spontaneity are instantly identifiable. His sound is deep, dark, with a wide vibrato, reminiscent of such swing era tenors as Ben Webster and Coleman Hawkins. Murray embodies an unending curiosity, always receptive towards new frontiers in his global musical exploration. Few musicians in jazz history have proven more vigorously productive and resourceful, having released over 150 albums under his own name. Murray was a founding member of the World Saxophone Quartet with Oliver Lake, Julius Hemphill, and Hamiet Bluiett. He’s recorded or performed with musicians including Henry Threadgill, James Blood Ulmer, Olu Dara, McCoy Tyner, Elvin Jones, Ed Blackwell, and many more. In 2017, Murray issued Cherry/Sakura, a collaboration with Japanese pianist and composer Aki Takase.