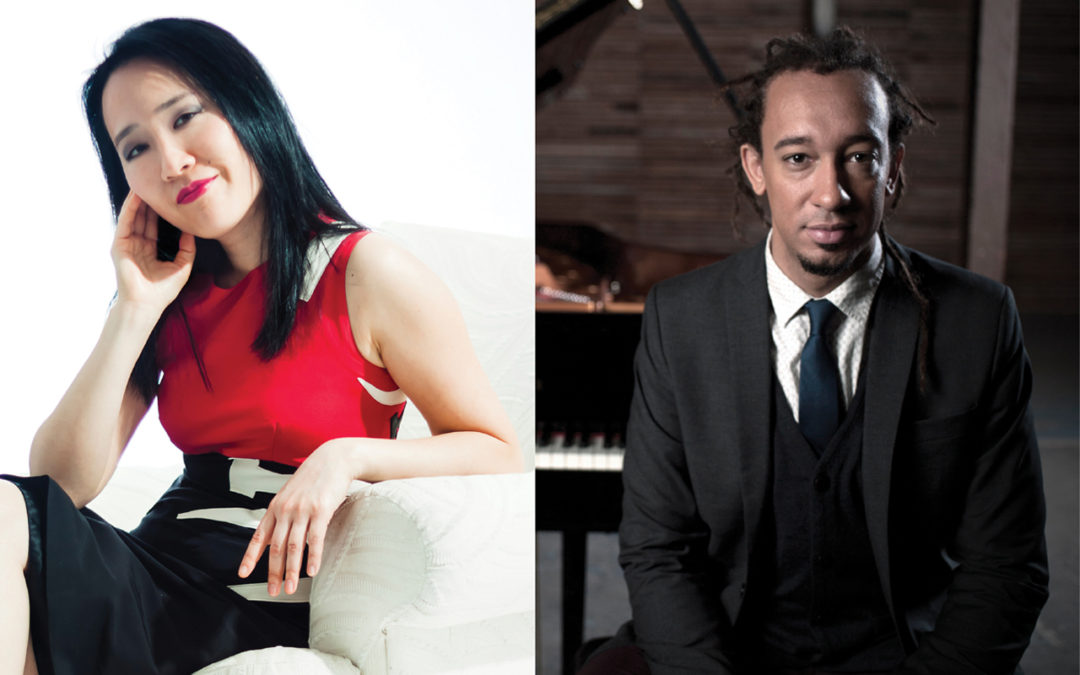 The four-time Grammy-nominated pianist/composer brings his Tributary Tales trio to Seattle with Joe Sanders on bass and Kendrick Scott on drums.

Gerald Clayton searches for honest expression in every note he plays. With harmonic curiosity and critical awareness, he develops musical narratives that unfold as a result of both deliberate searching and chance uncovering.

The son of beloved bass player and composer John Clayton, he enjoyed a familial apprenticeship from an early age. Clayton honors the legacy of his father and all his musical ancestors through a commitment to artistic exploration, innovation, and reinvention. His music is a celebration of the inherent differences in musical perspectives that promote true artistic synergy. Inclusive sensibilities have allowed him to perform and record with such distinctive artists as Diana Krall, Roy Hargrove, Dianne Reeves, Ambrose Akinmusire, Dayna Stephens, and John Scofield. Clayton also has enjoyed an extended association since early 2013, touring and recording with saxophone legend Charles Lloyd.

Joe Sanders has made a name for himself through his versatility, dedication, and steady pulse. He is one of the most sought-after young bass players of his generation and has played with Ravi Coltrane, Herbie Hancock, Jimmy Heath, Wayne Shorter, and Dave Brubeck, among others.

Kendrick Scott is an alumnus of the famed Berklee College of Music. He has performed with Pat Metheny, Joe Lovano, Terence Blanchard, and Dianne Reeves, and currently plays with the Charles Lloyd Quartet alongside Reuben Rogers and Gerald Clayton.

Pianist Helen Sung is poised to take her place as one of the preeminent voices on today’s jazz scene. Anyone who caught her performance with the Jazz at Lincoln Center Orchestra with Wynton Marsalis last October can attest to that; she was an absolute standout. Her music has been called soulful and smart, and is characterized by irresistible grooves overflowing with a warm humanity that is both thrilling and unforgettable.

A graduate of the prestigious Thelonious Monk Institute of Jazz Performance, she has worked with such jazz luminaries as Clark Terry, Slide Hampton, Ron Carter, Jon Faddis, Wayne Shorter, and MacArthur Fellow Regina Carter. In addition to her own band, Sung can currently be seen with the Mingus Big Band & Mingus Dynasty, T.S.Monk Band, and Terri Lyne Carrington’s “Mosaic Project.”

Sung’s quartet includes John Ellis on reeds, Boris Kozlov on bass, and Terreon Gully on drums. Ellis expresses a keen intellect and easy virtuosity as both the leader of his own projects and as an in-demand sideman. Kozlov is a two-time Grammy Award-winning acoustic and electric bassist, composer, and arranger. Gully has performed with various musicians, including Christian McBride, Ron Blake, and Stefon Harris.

Mark your calendars! Stay home for late June as we welcome back old friends for some incredible music. It has been too many years since Ray Anderson, Gerry Hemingway, and David Murray have been here. And we’re happy to build momentum with Kris Davis, Sylvie Courvosier, and Ambrose Akinmusire. We’re bringing it home! –John Gilbreath