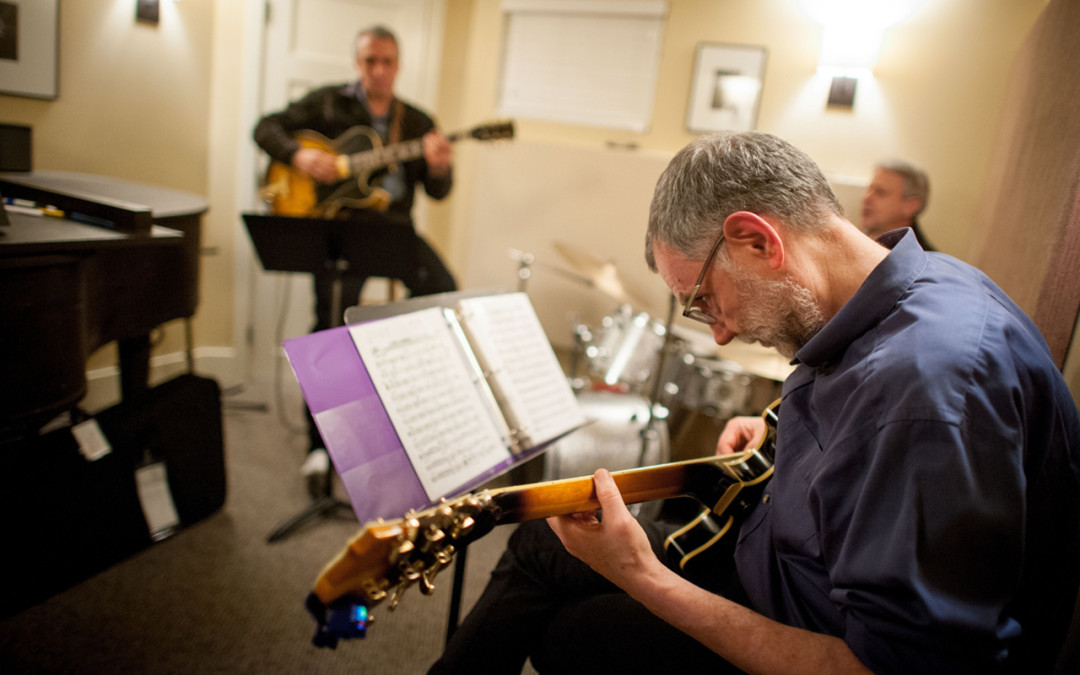 It’s Thursday night in south Seattle, and live jazz winds throughout a South Morgan Street home. Between the four ensembles rehearsing in the house – one in the living room and three in soundproofed rooms downstairs – it might initially appear that one has stumbled across a massive garage band. But this is far more than that.

“The left brain is the side that’s reading the music and balancing your scales,” instructor Julio Jauregui tells his Brazilian ensemble downstairs. “The right brain is the one that’s like, This is art. If you get lost, you have to just rely on your ear. When you hear a certain chord, that’s like the palm tree where you turn right.”

Upstairs, members of Leah Pogwizd’s Level 1 combo are practicing their solos. “What I’m suggesting here,” she says, “is you choose something to riff on, and you run with it for the same eight bars. You’re building a specific muscle in your playing: don’t edit your idea, don’t censor yourself. We want to be okay with it being a little rough around the edges, because that’s what makes it jazz.”

Born in 2008, Jazz Night School is the work of Erik Hanson, a musician and teacher who took piano as a child, fell in love with jazz in high school, and attended Boston’s Berklee College of Music. After moving to Seattle as an adult, a certain void caught his attention.

“There were people, most specifically adults, who wanted to learn to play jazz, and there just was not an opportunity for a structured learning environment that could help people progress,” Hanson says.

So he built one. Jazz Night School launched as an eight-week-long trio in Hanson’s living room, then expanded to include ear training and harmony classes, then more ensembles. As enrollment grew, so did Hanson’s home: from 2010 to 2011, he and his wife Debra, with the help of student Rick Katzer and many other volunteers, built out four additional practice rooms downstairs. They also hired more instructors. Then, from 2011 to 2012, Jazz Night School became a 501(c)(3) non-profit.

The organization continues to grow steadily, and this quarter, at its highest enrollment yet, there are over 150 seats filled between twenty ensembles (standard combos, trad jazz, gypsy jazz, big bands, Brazilian etc.), five classes, periodic workshops, and private lessons. The majority of the students are adults, representing a full spectrum of careers: therapists, engineers, programmers, biochemists, and more. Some are music school graduates or have other experience with jazz or other types of music earlier in their lives; some are coming in brand new. There are currently 15 instructors, and the ensembles and big bands rehearse weekly, then perform at Columbia City’s Royal Room at the end of each ten-week session.

One of the main strengths of the program is that students can genuinely come in at any level or age, and grow their skills significantly from that place.

Thus, “at the age of 50-something, you find you’re learning things you never knew existed,” says vocalist and percussionist Naomi True. “I have grown leaps and bounds as a singer. I was singing rock [before Jazz Night School] and you sing a certain way. Jazz is more subtle, more sensitive, requires more dynamics. I really had to pull back, and jazz has opened a whole area of the voice that I just wasn’t aware of.”

“I could always find a garage band, but that didn’t have the repetition and the same room to grow,” says guitar player Alan Shefveland. “Jazz Night School gives me an opportunity with a seasoned pro to play and play regularly, and to see what I don’t know and learn that.”

One of these pros is instructor Rick Leppanen, a member of the renowned local group Pearl Django.

“Because Rick has played with many different people for so long, he knows a lot and has a lot of ideas in his head,” says Gypsy Jazz ensemble member and Jazz Night School board member Michael Stout. “Jazz is like Sudoku of the mind. I love the math involved, and love the intricacies of understanding what’s going on and why it works.”

“There are a lot of insights that I hope I’m adding, just because I’ve been there,” says Leppanen, especially related to performing. He says that students particularly value that feeling of being part of an ensemble. “I try to relay that yes you are, and a very important part, so keep at it, and we’re gonna sound like a band.”

The opportunity to receive high quality jazz instruction, no matter one’s level, and work steadily toward a performance is very powerful in itself. But there’s something else distinctive about Jazz Night School, too: the way it seems to truly “uplift lives,” as articulated in its mission statement.

“Music is not like anything else,” says Hanson. “It physically affects us. I think it’s the closest thing to magic there really is.” Even so, with Jazz Night School, he says, “we didn’t realize what a community would form, and how much this would make a difference in people’s lives.”

“The energy is really cool because they’re dying to be there,” says Dawn Clement, acclaimed jazz musician and instructor of Jazz Night School’s Dawn Clement Ensemble. “It’s a familial bond working with the same people for ten weeks, and you’re just bringing your tired self in the evening and getting past your insecurities. It’s a very vulnerable, exposed thing to improvise and play music together, and very uplifting.”

“Most of us are not doing this for a living so it’s just out of a passion for it,” says True. “And there is a certain amount of humility because most of us have put down our instruments for many years and there’s a lot of fear in picking them back up. Everyone messes up and makes mistakes. And everyone grows, and you see everyone growing.”

True found Jazz Night School shortly after she was diagnosed with breast cancer in 2011. “I wouldn’t have been able to get through all I’ve been through without that creative and spiritual outlet,” she says.

Pianist and accordion player Adrienne Reed also came to Jazz Night School while she was going through treatment for breast cancer in 2010, and says the “deep well of support” she received, both emotional and financial, had an enormous impact. (Jazz Night School offers financial assistance to students who can’t afford tuition.)

“Even more important than that scholarship I received,” says Reed, “was a strong sense of belonging to a very caring community who were there for me, and helped me focus on the music so I could heal.” Case in point: while Reed was going through chemotherapy and losing her hair, Hanson shaved his head and another instructor cut his hair very short in solidarity.

As a way to give back, Reed, now in remission, volunteered with the Up-Beat Girls Jazz Camp that Jazz Night School ran for middle school girls in 2014. “Everyone could do with a little bit of creative expression and the ability to learn to improvise so quickly in that environment is really powerful,” she says. “I think it really can change lives. The kids really opened up.”

On the other end of the age spectrum, Shefveland notes, “I’m a strong believer that if you just focus on your career, you end up not being happy.” Furthermore, “when transitioning into retirement, if you don’t have a passion beyond just work, you don’t have a healthy life afterward. And especially if you were working in an intellectual industry, it helps to have an intellectual outlet.” For him, Jazz Night School provides that.

What’s next for Hanson and Jazz Night School’s board of directors? Securing a permanent home in a commercial space with practice and performance spaces, recording facilities, a listening lounge, and more is a top priority, as well as expanding the curriculum at all levels.

“We’re just blossoming,” Hanson says. Some students have taken to rehearsing with each other even outside of their scheduled evening with their instructor, and Jazz Night School is getting more and more requests for gigs at corporate events, fundraisers, and more.

Learn more about Jazz Night School and see how you can join or help at jazznightschool.org.