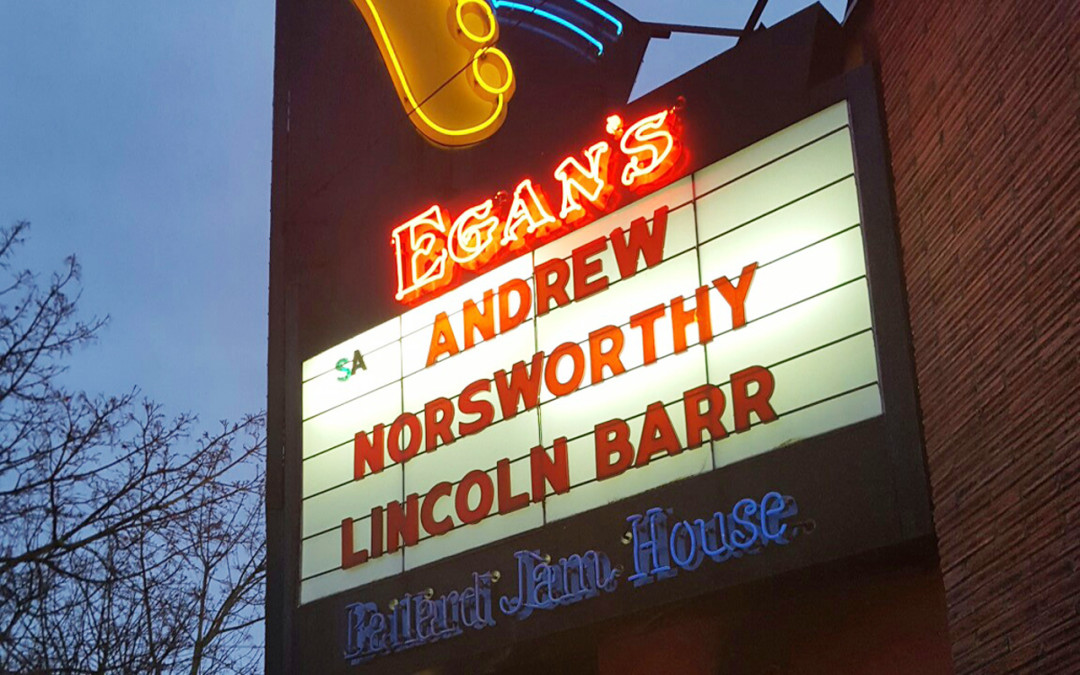 A space heater whirs quietly near the small round table as Suzanne Weghorst recounts the story of Egan’s. It’s a Seattle January afternoon and the outside gray offers dim light through the club’s windows. The heat isn’t on yet and her husband, Ted, stays warm and relaxed across the table from her, wearing an overcoat and fedora. She laughs; her voice is low and husky.

It was August of 2005. Their son, Jacob, a saxophonist, was supposed to be playing that night at the old Penny Cafe. On her way over, she ran into the guitarist who played with him. He told her that the Penny Cafe had closed. But then, he proclaimed, “Wouldn’t that make a great jazz club?”

She continued on to find the actual “Closed” sign on the door, and in she looked. To her, the building recalled the old New York jazz club feel with its small size, the front door that swings both ways. As she stood there, Jim Skidmore, the toothmaker who works next door, came out. Suzanne said to him, as if speaking it aloud would make it come true, “Wouldn’t it make a great jazz club?”

Within a few weeks the lease was signed.

They named Egan’s after Suzanne’s grandfather, a New York composer/ musician, part of the Tin Pan Alley scene. Under the stage name of “Happy Jack Egan and His Oo-La Girls,” he toured Europe as a variety theater performer, and it was there he met her grandmother Daisy, who was a seamstress in a London theater. Some of his music was even recorded in movies: “Be Still My Heart,” the theme song sung by Irene Dunne, in the 1936 movie Theodora Goes Wild.

The building itself, located in the heart of Ballard, was built by current owner Kirk Nordlund’s great-grandfather back in the early 1900s. After serving in the Navy during the Korean War, Kirk’s father John, the original owner, used it to found his famous National Drycleaners, the first name to be displayed brightly on the marquee.

Originally, Suzanne thought that Egan’s would just be a spot to offer the students who were winning national championships in big band contests a place to learn how to play in combos.

“Being a band mom,” she says, “I thought, maybe we’ll just have paper plates and soft drinks and give them a place to play…but it quickly turned into a full-blown club.”

“I was so naïve,” she continues. “I was naïve about construction, contracting….I had to learn all this stuff.”

She laughs, “The first purchase on our line of credit was that piano.” They put it in storage at a friend’s during the remodel but, Ted pipes in, “they delivered it before the dry wall was done, we had to totally cover it to keep the dust out.” And, to the delight of every drummer who has been saved the haul, they also bought the house drums, a highly rated Gretsch Catalina Club set. They stored them at their house. Ted chuckles as he tells of riffing on them whenever he passed by.

“It was very impulsive,” says Suzanne. “It was one of those things, where, if you’d known what you were getting into before you did it, you never would have done that.” Then she adds after a long pause. “But, you’re glad you did. So you know….”Another pause. She shrugs like Tevye in Fiddler on the Roof, “Life.”

It’s been 10 years since Egan’s opened and Suzanne and Ted, while still passionate about the music, are at an age where they may be ready to move on. They are hoping to transition and get someone involved who wants to take the club to the next level, continuing the Egan’s name.

She insists, “If [the new owners] can make it more successful, that’d be great.”

But at the same time, they won’t give it up easily, wanting to preserve the eclectic variety of the music.

“Jazz is the motivating genre,” says Ted, but they remain committed to providing a venue for local musicians who perform other genres as well, including roots, acoustic, and singer/songwriter. They even present magicians, and have a Cabaret Month every March.

“I think of it as a community resource,” Ted claims.

The couple wants someone who is committed to their mission, for it to remain an all-ages club for local music. They’re hoping to transition seamlessly so as to have no break in programming.

But until then, Seattleites can find them, along with their illustrious waitress Heather, from Wednesday through Saturday, present for the musicians and their audience.

Egan’s is hosting a festival of cabaret shows every Friday and Saturday this month. Visit ballardjamhouse.com for schedule & tickets.