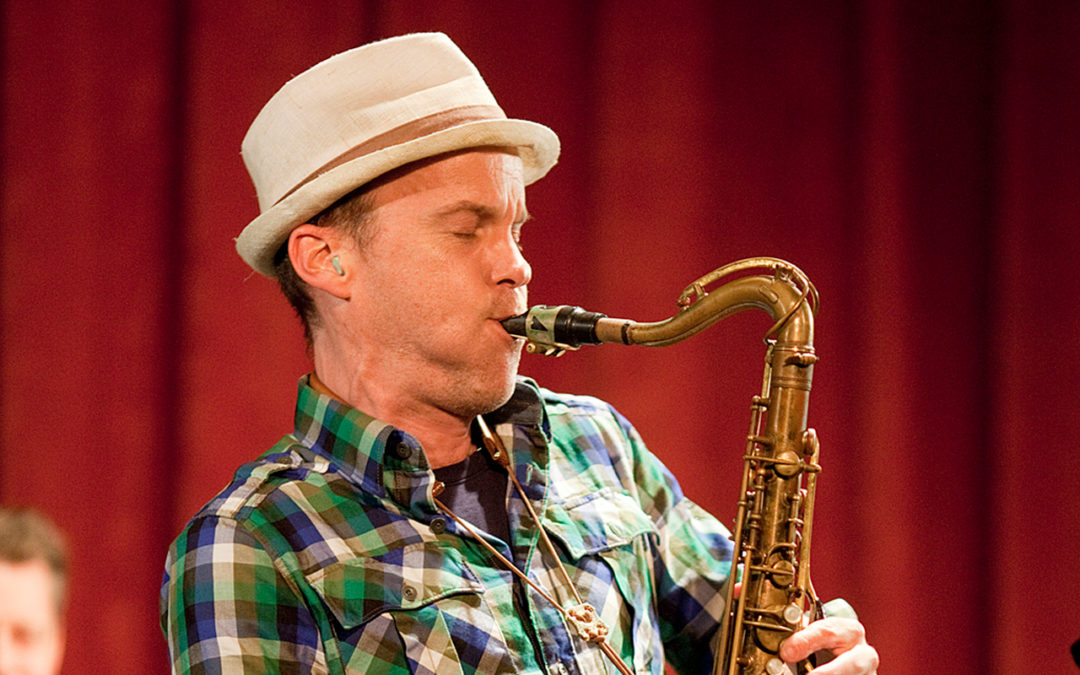 “Stylistically eclectic, albeit sonically cohesive” and spinning up a “wide range of tone colors for their adventurous excursions” (All About Jazz), the band produces music of highly intuitive interplay and cohesion.

The quartet adopted its names after playing in 2008 as The Benefit Band at a fundraising concert for a seriously ill friend and sometimes bandmate. The beneficiary of that event, Andrew D’Angelo, recovered, and Endangered Blood thrived, too.

Speed and Black have, of course, appeared together in many bands, but of all those, said Chicago Reader, “Endangered Blood is the one where their contrasting styles flower most fully and fit together most organically.”

Black leads his own trio as well as post-rock/jazz group Alas No Axis. He has performed often with the likes of Tim Berne and Dave Douglas. His latticework style is ideally suited to embrace improvisation within the context of composed forms, which is how Speed, the quartet’s chief composer, obviously likes things done.

Black is a Seattle son, and Speed hails from the Northwest, too. As a child, Speed first studied classical piano, then clarinet. In high school a fascination with jazz led him to take up tenor saxophone. He studied jazz at New England Conservatory of Music, then moved to New York. He has been called on by many for his broad mastery, whether letting loose or creating exquisitely tender lines.

Ensuring a horn-dense sound is alto saxophone and bass clarinetist Oscar Noriega. He emerged as a member of Tim Berne’s Snakeoil quartet, becoming a stand-out there. He plays with an inspired sense of purpose, and in Endangered Blood perfectly complements the tenor-saxophone explorations of Chris Speed.

Bassist Trevor Dunn has skills equally as honed on electric bass as on upright acoustic (his bass-of-choice in Endangered Blood); among his more surprising accomplishments is to have played with the Montesano, WA rock band, Melvins Lite, during their 51 gigs in 50 states and DC in 51 days in an attempt at inclusion in the Guinness World Records.

Ben Ratliff said in the New York Times that, in Endangered Blood, “Dunn is the group’s anomaly. He’s about the same age as the rest of the band…but arrived in New York later, after playing in the West Coast experimental rock bands Mr. Bungle and Fantômas. As the rest of the band felt light and volatile, playing hide-andseek with harmony and rhythm, Mr. Dunn’s bass sound remained broad and deep and strong. He gave it sense and purpose.”

In Endangered Blood, his always in-the-pocket intricacy underpins the horn players’ serpentine lines and Black’s busy percussion to create amiable but gritty jazz that looks back while resolutely moving forward.