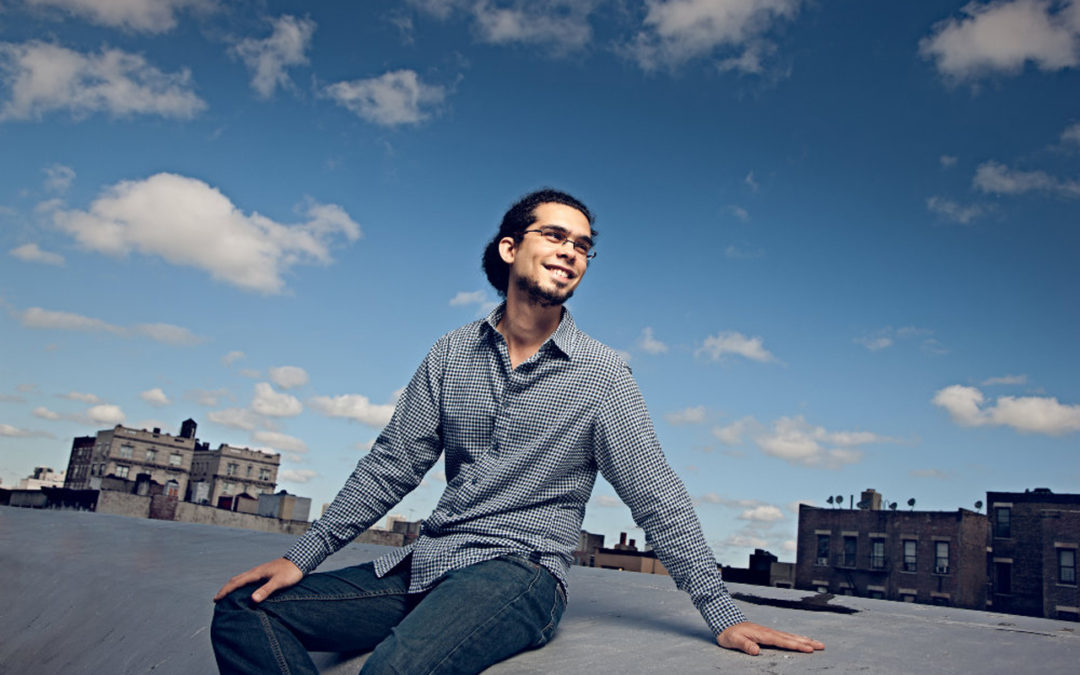 Nature’s beauty is what greets visitors to Fabian Almazan’s website: his landing page features a vista of sun-glazed forest and the bird-adorned cover of his latest album, This Land Abounds With Life.

Not content to limit his horizons to music, the Cuban-born, Miami-raised pianist and composer is an active advocate for the environment. In fact, the name of the record company he founded, Biophilia—translating to love of nature—reflects a core tenant of his worldview.

With environmental care top of mind, Biophilia produces no plastic CDs, instead offering the Biopholio™—a 20-paneled origami-inspired objet d’art printed on FSC-certified paper with, liner notes, and a digital download code. Almazan states that “in addition to creating meaningful and imaginative music, [Biophilia’s] artists are united by a common interest in having a positive impact on the environment and our communities.”

One of the label’s artists is Malaysian born, Australian-raised bassist and composer Linda May Han Oh. A Rising Star recipient of the 2012 DownBeat Critics Poll and 2008 ASCAP Young Jazz Composer, among other accolades, Oh is one third of Almazan’s trio. Oh has performed with Joe Lovano, Geri Allen, Kenny Barron, Terri Lyne Carrington, and is a bassist in Pat Metheny’s quartet.

Almazan, who is married to Oh, is a Grammy Award-nominated composer and pianist, hailed by Terence Blanchard as “one of the great young talents of his generation.” He has performed in Blanchard’s band since 2007. Almazan has also worked with Mark Guiliana, Ambrose Akinmusire, and Avishai Cohen.

With four albums as a leader of his powerhouse trio, Almazan is expanding the possibilities of the jazz form. “Much like the best of his contemporaries, Almazan revels in the space between musical styles, and between form and improvisation…What he achieves is personal, based on reflection, the sound of a man finding his place in a world that, musically speaking, can defy borders” (Wall Street Journal).

Born in Havana, Almazan began in the classical piano tradition. After immigrating as a child to the U.S. with his family, he studied piano in Miami with pianist Conchita Betancourt. Almazan went on to study at the Brubeck Institute in California and obtained a master’s from the Manhattan School of Music.

Seamlessly melding music in classical, Latin, and post-bop jazz-based traditions, Almazan is as comfortable composing as performing. In 2014, he received the Chamber Music America New Jazz Works commission. His 2017 album Alcanza (Biophilia) is a one-hour, nine-movement suite that Troy Dostert for All About Jazz praises as full of “infectious synergy” with a “restless, yearning quality to the music that is riveting.”

Rounding out Almazan’s trio is Puerto Rican-born, New York City-based drummer, Henry Cole. All AboutJazz declares that “with his flexibility, grace, and sheer power behind the drum kit, he has proven indispensable to the sound of some of the world’s most acclaimed jazz groups.” Cole is a Grammy Award-winner, skilled arranger, and dynamic drummer who draws on African, Puerto Rican, European, and American musical roots. He has played with Miguel Zenón, David Sánchez, and Chris Potter.

Expect a lively, tuned-in performance from daring, socially perceptive artists who appreciate their responsibility to the earth as well as their artform.