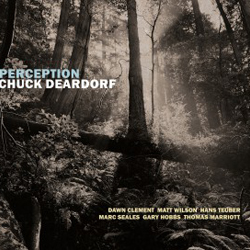 Knapp’s slinky, bluesy, Mingus-like creep, “Home,” is a standout, with Deardorf paring down the original big band arrangement (on Knapp’s Secular Breathing) to a rich three-horn combo. The bassist’s lickety-split virtuosity gets plenty of elbow room (though it’s never overbearing) on DeJohnette’s emotionally-urgent “Silver Hollow” (acoustic bass guitar) and Swallow’s elegant “Falling Grace” (fretless electric). Deardorf takes the lead on acoustic on a jaunty “Monk’s Dream” and offers two sweet solos on Winwood’s classic, gospel-tinged ballad, which closes the album. Teuber’s piping, legato and Clement’s lively conversations with Wilson are a pleasure throughout, as is Seales’ sparkling outing on “Falling Grace” one of many solos worth singling out. –Paul de Barros 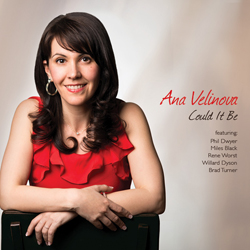 Ana Velinova
Could It Be
Ward Street Records

Sparkling and smooth with a gentle ability to surprise are the hallmarks of vocalist Ana Velinova. Her latest album, Could It Be, is a collection of heartful songs of love and yearning. The album will not disappoint listeners who enjoy jazz standards that mix the melancholy with the hopeful in search of human connection. The opening piece “Let’s Get Lost,” popularized by Chet Baker, is an upbeat number featuring Velinova’s delicate voice perfectly balanced with Miles Black’s piano and Rene Worst’s bass playing, mixed up with a jovial solo by Phil Dwyer on saxophone. “The Very Thought of You” is a strong vehicle to highlight Black’s piano prowess and Dwyer’s dexterous sax playing with Willard Dyson providing a confident, backbone beat on the drums.

Taking George Gershwin’s classic “Embraceable You,” Velinova showcases her vocal range with her luxuriant tones like tendrils of sound comfortably unfurling around you. “Little Sunflower” by the famous trumpeter Freddie Hubbard is a more somber piece interpreted with loops of Velinova’s enchanting no-word vocalizing and Brad Turner’s sultry trumpet playing making for a satisfyingly ethereal soundscape. The title song co-written with Black and Velinova is an elegant but sad piece much like Velinova’s other original, “Haven’t We Met,” both beautiful and speaking from a place of honesty. The final offering hearkening back to Velinova’s roots is “White Cloud (Oblache le bialo),” which Velinova cites as “the unofficial anthem of Bulgarian immigrants across the globe.” Velinova sings in Bulgarian and brings forth the unmistakable emotions of affection and longing that we all share for the place we call home. –Lucienne Aggarwal