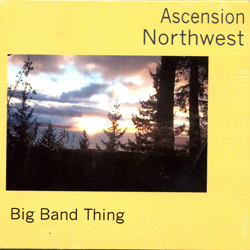 John Coltrane is one and many. After finding religion in 1957, music’s sacred calling pulled him in “Both Directions at Once,” the name of a 1963 “lost album” released this year that has since charted 21 on Billboard’s Top 200. Of these, saint John Coltrane, the self-sacrificing spiritual searcher, lives on today. West Seattle-based drummer Don Berman pays homage to the saint’s revelations with his project Ascension Northwest.

Like the original recording, which infamously included two versions, this powerful lineup can be heard in a studio version, recorded in Jack Straw Studios for KEXP’s Sonarchy, and a live performance captured in The Royal Room. Notable differences include Matt McCluskey finding miraculous harmonies on electric, rather than acoustic, keyboard on the first, and the addition of the incendiary Ivan Arteaga (alto sax), incandescent Brennan Carter (trumpet), and intelligent Kelsey Mines (bass) on the second. Otherwise, Berman’s shrewd orchestrations, combining soloists with select backgrounds, propel the ritualistic form forward.

These players, too, create what on Trane’s proto-album was a sanctified collective, a celebration of the holy consecration of sound into music. Theirs is the lasting power of Trane’s original project—a whole more than the sum of its parts—brought again to life in the Emerald City. We would be right to step into the chamber of their profound service, immerse ourselves in the beauty of creation, until the last few notes sound, Ite, missa est. –Ian Gwin 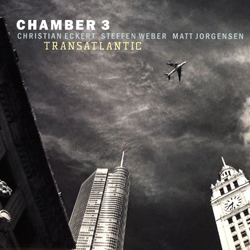 Like a longstanding relationship between good friends, Transatlantic impresses with its ease, candor, and respect that each distinct player shares for one other. As the title suggests, it’s an album merging cross-global talents. The Chamber 3 collective consists of German players Christian Eckert on guitar and Steffen Weber on tenor saxophone, along with Seattle artists Matt Jorgensen on the drums and Phil Sparks on bass. This is the foursome’s second offering following the 2014 album Grassroots.

Transatlantic is sharp, thoughtful, and vivifying with a modern edge. The project naturally lends itself to a democratic sound, as three of the musicians are composers, while all four players’ music resonates equally. The opener, “The Sparks” by Jorgensen, is a lively mid-tempo piece that juxtaposes jaunty bass, guitar, and drum instrumentals with a saxophone that pleasantly mingles the plaintive with joyfulness.

“Chillaxed,” a piece by Eckert, lives up to its name with a slow-paced style. It slinks by with a gentle, but thoroughly satisfying, walk-in-the- park-sort-of-sound, with attractive sonic interludes offered by each artist. “Hesitant Spring,” also by Eckert, is one of the most beautiful pieces with its memorable melody; tender and wistful with an elegantly paired soulful, slow bass and guitar that lay the groundwork for the exquisite drawn-out saxophone. The persistent yet reverent drumming keeps things balanced all the while. Weber’s arrangement of the classic, “When You Wish Upon a Star,” is like the lucky hidden charm in a cake. It surprises with a recording of urban traffic sounds to open and then is fleshed out by the confident and contemporary playing by each musician. This piece could end up as part of a film track contrasting Pinocchio’s hopeful sentiments with realism. Transatlantic is thoroughly engaging and full of nuggets of creativity that only get better with each subsequent listening. –Lucienne Aggarwal 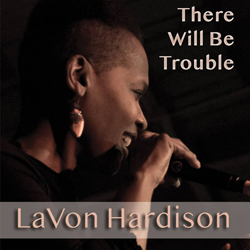 LaVon Hardison
There Will be Trouble
Self-released

LaVon Hardison doesn’t just sing standards, she probes them, breathing new life into their time-worn shells. On her latest release There Will be Trouble, Hardison draws her source material from the deep well of music’s history, re-imagining songs from Duke Ellington to Katy Perry.

Steeped in the Baptist church of her youth, Hardison’s vocals are soulful, bold, and unabashed, gliding easily between sultry and playful. She serves her “Frim Fram Sauce” (Nat King Cole) with a side of relish, clearly savoring every line. “Mood Indigo” (Ellington) is Hardison at her most restrained and eloquent, with Hans Teuber’s clarinet offering an emotional counterpoint. Also featured on the album are Dean Schmidt (bass), David Deacon-Joyner (piano on “Heat Wave”), and Osama Afifi (bass on “Heat Wave”).

Throughout There Will be Trouble, Hardison’s warm, blues-tinged vocals bounce off the light and bright plunking of Verlinde’s keys. “Firework” (Perry) is an ascending conversation of hope between the two with the keys having the last sparkling word.

The title track takes its name from a line in The Clash song “Should I Stay or Should I go.” Hardison transforms the song, giving it a solid jazz feel while staying true to its burning directness. On the concept of trouble, Hardison notes that in our current climate, there is no shortage. While it’s often an uncomfortable feeling, trouble can also mark a turning point for healing. There Will be Trouble succeeds at breaking down genre barriers to show the possibility of music as a vessel for transformation. –Tara Peters

← On The Radio WHSS Duo: Wayne Horvitz and Sara Schoenbeck →