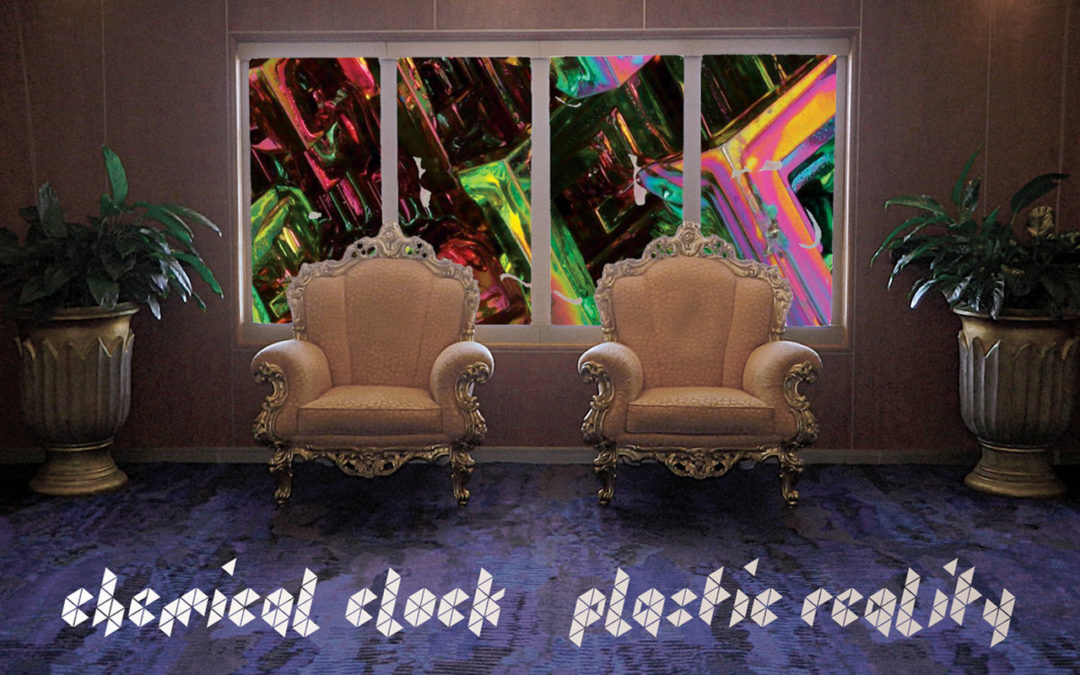 “Ode to a Great Band”

Plastic Reality is Chemical Clock’s final album. Let us all mourn the end of this visionary band. Their music will live on. It is a gift.

Synth wizard Cameron Sharif’s compositions are held in a weird and deeply intuitive special universe. None of us (the listeners) have ever been to the universe from which this music comes; only the band has been there. Each song is a musical story spun from that universe. We get the pleasure of experiencing the stories unfold in twists and turns as unfamiliar as they are fascinating.

Sharif, Evan Woodle (drums), Mark Hunter (bass), and Ray Larsen (trumpet) met while at the University of Washington Jazz program, where they became the heartbeat of the creative music scene coming out of the UW at the time. Like many of their compatriots, Chemical Clock floated between DIY, jazz, and experimental scenes in Seattle, playing both lo-fi house shows and rock clubs. They have three previous albums, all of which are superb (including their trippy, blown-out Christmas album that sounds like it was recorded on someone’s phone in the basement of UW). Many have drawn comparisons between listening to their music and taking psychedelics, which may be true—but this most recent album has a certain lucid quality.

On Plastic Reality, threads of house music run throughout, while the layering of sounds from different musical spheres is constant. Each band member plays at least two roles: the first, playing the composition (no small feat when it comes to Sharif’s pieces); the second, drawing from their individual musical worlds to add to the collective. The effect is a group sound that is constantly being stretched and pulled in a malleable and elegant dance. Sometimes these sounds are tugged almost to the brink of combustion, as in the track “Prehistoric Treatment.” Other times the group drives forward together, steadfast in their collective direction, as in my personal favorite track, “Donut Cat.” This musical interplay is a mystifying pleasure to behold. In short, buy this album.

And a final toast to Chemical Clock: a sincere thank you for the enduring stories from your universe. May you return there and live out your days in peace and prosperity. We will be listening for years to come.

Some music transports us to other times and places and Café Pluvieux is an easygoing but engaging journey through different destinations and moods. Café Pluvieux is the latest offering from the Seattle singer, songwriter, and pianist, Victor Janusz. This is his fourth full-length studio recording, following his most recent offering, Living in a Blue State (2015). The title of his new album Café Pluvieux translates as “rainy café,” and as the name suggests, the album delivers somber tunes but unexpectedly balances the tone out with some upbeat numbers.

The first song is one of those exceptions. “Don’t Start the Show Without Me” is a cabaretesque, playful tune full of spirited piano and vocals by Janusz and even a surprise interlude with steel drums. The following track, which is also the title track, lives up to its name: “Café Pluvieux” is a slower, moody song that conjures up images of dark skies and rainstorms, and talks of doubts and queries about life, with a few ironic lines like, “It’s all in God’s hands or maybe Godot’s.” There are some pleasant instrumental interludes in this piece with the piano and double bass making their presence known.

These first two songs are Janusz originals, but he mixes things up with his interpretation of some standards like Cole Porter’s “Night and Day.” Instead of Ella Fitzgerald’s swooning, smooth tones, Janusz gives us a mid-tempo beat duet between him and his regular vocal accompanist, Arwen Dewey. Further cementing the French theme is the classic “Sous le ciel de Paris,” made famous by Édith Piaf. Channeling Piaf, Dewey hums and effectively spins out a song of sadness, accompanied by the accordion and piano. Meanwhile, Janusz’s version of “Over the Rainbow” is refreshing and purely instrumental.

This album also showcases strong Northwest musicians including Medearis “MD” Dixson on alto and tenor saxophone; Spencer Hoveskeland on double bass, electric bass, and guitar; Eric Wilcox on drums; and several others. The final offering, an original titled “Le Baiser,” is another duet with Dewey singing in French. It’s a more mid-tempo piece that melds some of the sadness and sweetness that exists in us all wherever we happen to be.