For The Record, September 2018 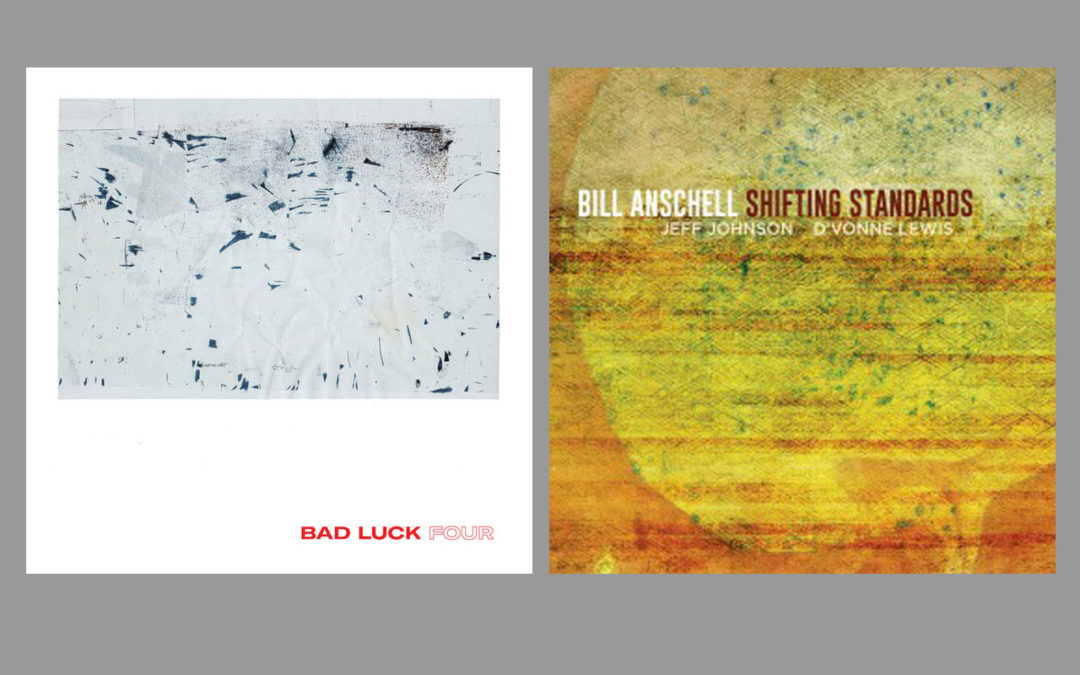 Jazz musicians are mathematicians, carpenters, athletes. With absurd devotion they hone their minds and muscles in ceaseless work, just so that at the end of the ledger the balance reaches zero, so every corner dovetails into a standing cabinet, so the javelin might reach a few inches further. If you need an answer to why jazz musicians work so hard, all the time, the latest release of pianist Bill Anschell has it. Shifting Standards, recorded with heavyweights Jeff Johnson (bass) and D’Vonne Lewis (drums), represents an incredible craftsmanship of rhythm and harmony, body and soul.

Standards superficially does not stand out for originality, being a bag of standards the long-practiced band recorded with close detail by producer Reed Ruddy a single afternoon in a single room within Avast Studios. Yet precisely from the formula of limitations does the jazz musician derive the beauty of originality. As the title suggests, Anschell’s approach stands out for its rhythmic intricacy, more a re- than a dis-placement of melody on the circle of time. Thus he smartly Möbius-strips the descending thirds of Fats Waller’s “Jitterbug Waltz” or the repeating triplets of “You and the Night and the Music” into one another. Yet Anschell’s harmonic depth, as on the ballad “Some Other Time,” is heartbreaking, and counterpoint, as on “Con Alma,” stunning—as much Bill Evans as Bud Powell.

Leave it to the likes of Industrial Revelation’s D’Vonne Lewis to put time on the out-of-time. Varied but never messy, sharp and sweet when he’s not lingering like a fond memory, Lewis makes the perfect intellectual match for Anschell. Just listen to his triplet breaks and wild subdivisions on Anschell’s skewed “Night in Tunisia.” With his exacting grip on the melody, natural phrasing, and bluesy guts, Johnson fits like a third hand to the pianist, giving a serene solo on “Soul Eyes.” Their collective interplay, to say the least, nears psychic in its shape and timing.

Anschell’s rhythmic shifting recalls another pianist, Erroll Garner. Garner’s sense of subdivision made him a rhythmic ancestor to R&B crooners like Frank Ocean, just as Thelonious Monk felt a pulse later capitalized by hip hop. Jazz evinces rhythmic truths at the heart of many musics, and the classic recordings preserve the mosaic of layers that make such facts audible. Now, Anchell’s Shifting Standards is one of them.

For over a decade, Seattle-based duo Bad Luck—that’s Neil Welch (saxes, electronics) and Chris Icasiano (drums)—have packed and unpacked their deceptively simple formula of drums and saxophone. Through their deep musical partnership, they continue to recast the mold of contemporary music. Over countless fiery performances and three full-length releases, the depth of the duo’s compositional-improvisations has steadily developed, starting from the catch-as-catch-can edge of their classically free-jazz 2009 self-titled debut, moving the sprawling, heavy-metal intensity of 2011’s double-album Two, and changing into the grooving, Roscoe Mitchellian modularity of 2014’s Three.

This year, Icasiano and Welch rocket forward with their newest release, Four. The album continues their career-long, interlocked drive—like watching a car part dance in an invisible engine—but sustained now at a new altitude. Through the use of delay and echo effects, elegantly captured by producer Randall Dunn, their kinetic, amorphic sound has stretched out to take on a new suspense and pathos.

Yet even more than its predecessors, Four immerses the listener into the logic of its own musical world. For the eponymously titled opener, the godlike growls of Welch’s saxophone are drenched in a repeating, Stravinskyan riff, while Icasiano shifts walls of propulsion around him in a charging run. In the following track, “RBG,” the duo deconstructively expand a similar urging impulse, with Icasiano rewinding rhythms into a spine-tingling breakdown. For “Index,” the duo applies the same razor-sharp focus to an ambient landscape: Icasiano’s frantic brushwork intercut with the oceanic harmonics of Welch’s tape-spliced motif.

That’s not to ignore the duo’s serious acoustic chops. Take, for example, “Capital,” a collage of fountainous jets and schizophrenic melody-rhythms, like the manic breakdown of a frenetic machine. The album’s closer, “Big Sky,” is built on similarly expert foundation, formed as a long crescendo that runs from the soft river of Icasiano’s mallets and the elegiac voices, clarion and siren, of Welch’s sax. Though the product of intense musical effort, the effect is like feeling the rain come in at the end of a hike.

Rather than music, the layered cohesiveness of the album might suggest more the tricky multidimensionality of works by contemporary artists such as Tauba Auerbach, or the total sensuality of Andrei Tarkovsky’s films. Events progress, balanced but compelling; sound moves ever closer to something like the experience of the natural world. With the frank engineering brought about by Welch’s and Icasiano’s formidable technique and uncanny intuitions, Four presents a triumph in form and a step forward for both artists. It is a startling musical statement will subtly overtake and amaze its listener.

← On The Radio Jazz For All Ages →