Gary Hammon: Last of the Tribe 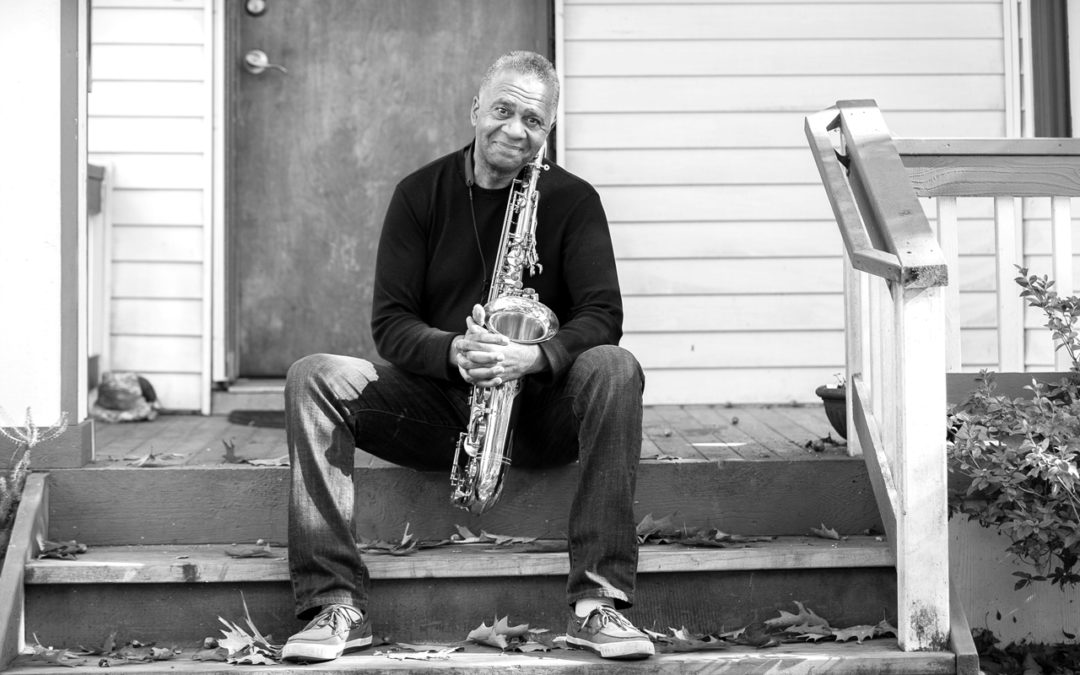 I first meet Gary Hammon on a sunny autumn day at the Ethiopian Community Center down on Rainier Avenue South. He’s playing a gig to help the Center mark the end of its season. Surrounded by the smell of incense and roasting coffee Gary sways, his body relaxed, a contented smile on his lips. He’s listening to Erik Esvelt, his longtime collaborator, lay down the melody for Hancock’s “Cantaloupe Island” on his flugelhorn. Gary traces Erik’s vector, uses the first couple of beats of his own solo to lean softly into his tenor sax, raise the reed to his lips, and blow.

Born and raised in the Central District, Gary took up tenor sax while at Garfield High School. In 1969 he went on to attend the New England Conservatory as part of its first intake of black students. After a career that took him coast to coast and through almost every modern musical genre, Gary returned to Seattle 15 years ago in order to devote himself to the fulltime care of his ailing parents. His forthcoming concert at the Langston Hughes Performing Arts Institute will mark the opening of a new chapter for this singular tenor saxophonist.

Listening to Gary play that afternoon, I am immediately struck by his easy, almost lazy, style and his soothing, tender tone: how he chooses to break down the center of the major II-V-I progressions of Joe Henderson’s “Recorda Me” with a series of descending flats in order to shift the Real Book standard toward a slower and more mysterious mood. I also notice his generosity as a bandleader: how he will encourage his fellow players through their solos, often uttering a “Yes sir!” at the end of a bar, or how occasionally he will end his own solos on the upbeat in order to stir the melody, keep the rhythm simmering, and create new opportunities for his band mates to riff off.

To his left sit the elders of the community. Their placement is not lost on Gary when he and I sit down to talk the following day: “I learnt a lesson that afternoon. You have to respect your Elders. It’s important. They were honored by the young people that day. You have to know where you came from to know where you’re going.”

That sense of history and purpose is very much part of Gary and his music. He has played with most of the greats. In fact, it would be easier for a writer to list whom he hasn’t played with. Among his collaborators and mentors are “Big” John Patton, Barbara Donald, Sonny Simmons, Grant Green, Carter Jefferson, John Stubblefield, Hadley Caliman, Sonny Rollins, Joe Henderson, Kenny Dorham, and local legend Joe Brazil. He’s also led his own outfits at such storied spots as Wally’s in Boston and Manny’s Car Wash in New York City. When Gary recounts any aspect of his life, or his own evolution as a jazzman, he does so with great humility, leading not with himself but with the men and women who have supported him. And, after his mom and dad, that list begins in earnest for Gary with Kenny Dorham, the trumpeter, singer, and composer, and Gunther Schuller, the former director of the New England Conservatory of Music: “Kenny Dorham fought for me. And Gunther. They really wanted me. There were twenty-five of us black kids that first year, out of a school of 900. It was pretty crazy. Gunther’s idea was to bring more people of color to that school. He’d bring Ornette Coleman, Cecil Taylor, and Jimmy Lyons. He’d bring these guys in and have them play a Duke Ellington Suite. He’d do some pretty interesting things and people would be like, ‘Wow,’ ‘Boom.’

“At the time I arrived at NEC, it was still all classical. We would study and play jazz down in the trash room in the basement. We would do everything in that smelly trash room.  Then in ‘72, we had to put on a big performance, so jazz could become an elective. We had to prove ourselves in Jordan Hall. Gunther came and told us, ‘If you don’t make it, if this program doesn’t make it, you can still remain at the school, but jazz will not be a credit.’ And Isaac Stern, and Arthur Fiedler were there from the Boston pops. The place was packed. And our band played, and the rest is history.”

“I had Mary Lou Williams as a teacher, and she was responsible for Monk and a lot of people writing. And Melba Liston, and also the First Lady of Trumpet, Barbara Donald. They were all big. They weren’t always nice to me, but they liked me. They saw the potential in me and they wanted me to do more, not take things for granted and really learn and they’d always tell me about how much potential I had.

“Carmen McRae tried to get me to just be a writer. She was funny.  She didn’t want me to starve as a jazz musician. When she realized that it was too late. She looked in my eyes and she said, ‘Oh my god, you’re going to do this. All I can say to you is good luck.’ She said, ‘Boy, you don’t know what you’re getting yourself into.’ I said, ‘Well, you did it too.’ And she said, ‘That’s why I’m trying to stop you from doing it!’”

Gary pauses to laugh with the memory before continuing: “You gotta understand that jazz is an expression of self. You can bring all the classical technique and all the classical approach you want, but that’s not the whole thing. Keith Jarrett has plenty of technique, but he’s also very expressive.

“Where I learned to play was in the streets, the streets of New York, the streets of Boston. You learn how to make a living. And through Harold Vick, that’s what I learned. Because when Harold couldn’t do the Apollo, he called me to do it…if he couldn’t do Manny’s Car Wash, he’d call me. He said: ‘So you want to be able to be a musician? Don’t stay in your comfort zone. Play everything you can.’ So what’s taken me out of my comfort zone is playing around all those major musicians. They’re not here anymore, but they inspired me. Those guys changed my life. They made me realize that the music is bigger than me. And it is. Just when you think you know something, there’s always going to be someone who comes along and can do it better.

“These days, you have kids that are trying to be the next ‘Trane and they don’t understand that he got to his sound through working with others. Jazz is a collective effort. ‘Trane was in all kinds of bands around all kinds of great musicians. He didn’t walk around and ask, ‘What school did you go to?’ Because his music wasn’t created in the school. It was created in the streets of New York.”

Gary himself is now an educator at Ballard High School and the irony is not lost on him: “Yeah. Kenny, Jacki, Barbara. They’d all be smiling now. I was inspired to become an educator by other cats that were doing it already, like Charli Persip (The New School), Larry Ridley (Rutgers), you know, those guys were always pushing me on this, and, a couple other Jazzmobile alums, Billy Taylor (U Mass, Howard, and Yale), and Jimmy Heath (Queens College, New York), they all were very inspiring to me.”

I ask Gary for an example of how their inspiration impacts his own work teaching. Without missing a beat, Gary answers: “So take this young guy I was playing with on Saturday. I’m going to work with him because he has great potential. And first, I want him to not double up so much. I told him: ‘You don’t have to fill up the space when it’s just the bass and two horns. We’ll do that. We’re the keyboard now. And if you let us alone, we’ll really take you in some places that you haven’t been; and harmonically it’ll be all right. And he’ll be like, ‘Wow.’

“Young people are taught now that you have to play amazing notes, and the teacher might mention Miles Davis. And when I hear that I laugh, and say to the kids: ‘But I knew Miles. He might start playing a phrase today and finish it tomorrow. You have to understand that. He knew he couldn’t play as fast as Kenny Dorham or Dizzy or Charlie, so he listened and he found his way into his own style.’ And that’s what I try to teach kids: it’s all about interpretation, finding your own voice.

“The elders I walked with. If they heard me playing something exactly like they played it, they’d say, man, that’s my shit, man. Don’t play my shit. So, you play your own. You got to take chances. You hearing me? I’m still taking chances. I’m still not afraid to move forward.”

Reflecting on the state of the scene today, and the hand-to-mouth conditions so many of Seattle’s jazz musicians find themselves working in, Gary’s voice shifts to a more sober tone: “In order to make it as a jazz musician, you have to stop thinking about survival. I’m not going to chase down gigs. When I come out, I’m going to be respected and I’m going to get paid what I want to be paid, not what they think I need to be paid, because that’s the way it was. It’s not that way anymore because somebody came into this town while I was away and broke down and deprogrammed everybody, but they’re not deprogramming me, because I’m not having it. You have got to stand up and take a stand. I’m the way I am because I got paid. Quincy got paid. We all got paid. People who make money out of jazz, they owe something to jazz. It’s time to try to restructure everything and go at it another way.”

I ask Gary how the gig at Langston fits into his broader goals for the jazz scene in Seattle, and for himself: “When I heard about the gig with Nathan (Breedlove), I sat down with Booker (T. Washington) and I said, well, this is an opportunity for me to get back in this, because if I can get in this, I’m going to help everybody and I mean, I’m really going to help them. “We’re calling it ‘Last of the Tribe,’ because we are. Everybody’s gone. People need to understand that it takes a village to play this music.

“And the audience that night, I’d like for them to know that when they come to hear a concert with me, that everybody’s involved, you know? I grew up here, and Booker grew up here, we’re homeboys. I wanna welcome my folks and folks that I don’t know; and when they come in, I want them to feel comfortable because we’re going to make them a part of something that they’re going to enjoy, that they’ll go home and say, ‘Yes, that was nice what they did.’

“I don’t come to play for me, I come to play for them…I come to present something that I’ve been working on, and that’s all…I’m presenting me to you…because what do I have to lose? I’m an elder now, so there’s nothing to lose anymore. So there’s plenty to gain. It’s going to be a real nice night.”