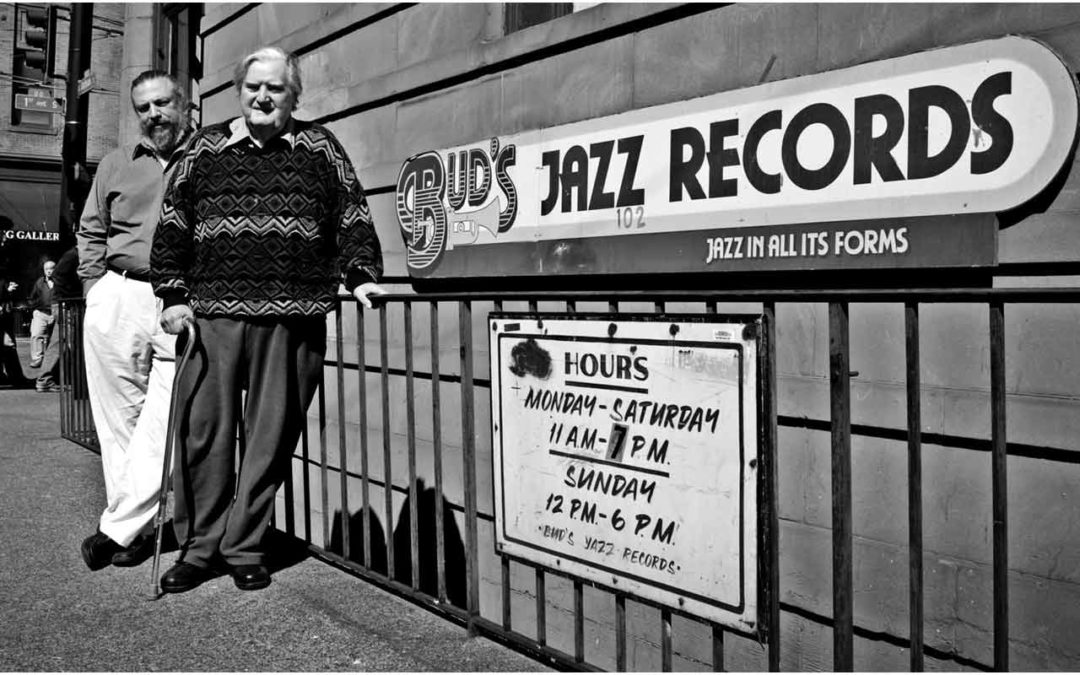 Bud Young, one of the most recognized figures in Seattle jazz of the last 35 years, has died.

In July 1982, after retiring from Montgomery Ward & Co. in Chicago, Bud opened Bud’s Jazz Records at 1st and Jackson, near Pioneer Square. It served as a gathering place for students of jazz from Seattle and far afield. DownBeat magazine recognized Bud’s as one of the best jazz stores in the country.

Its reputation, fueled by the store’s diverse and extensive stock and the certainty that Bud could share informed comments about everything he sold, attracted fans and musicians from around the world. In an autograph book, Bud collected signatures from the likes of Branford Marsalis, James Moody, and Dizzy Gillespie.

Born in Boston, Young listened to swing music during the 1930s before it was popular, and as a student at Columbia University in New York during the 1940s, he frequented the clubs of 52nd Street, hearing the likes of Dizzy Gillespie and Charlie Parker. When he moved to Chicago, he discovered the Jazz Record Mart, an all-jazz record store that would serve as the model for his own shop.

As he told this publication in 2008: “I thought maybe I would come out to the West Coast and open a store similar to the Jazz Record Mart. I had been in and around retail all of my life and I have loved jazz all of my life, so I put the two together and came out to Seattle and found this place. The rest is history.”

James Rasmussen, who had worked for Bud for 11 years, bought the store in 1999. But in 2008, with changing music-buying patterns, James shut down what Seattle Times jazz critic Paul de Barros called “the homey basement hub and hangout for Seattle jazz musicians and fans.” At the time, Bud said: “I’m a little sad, but that is a very small percentage of what I feel. The dominating feeling that I have is a degree of pride in the accomplishment of keeping this thing going for 25 plus years.”

Bud was much loved by generations of jazz fans and certainly by the musicians whom he tirelessly promoted both at his store and while co-hosting a KBCS radio show for several years beginning in the 1990s with saxophonist Don Lanphere.

In social media postings, many musicians have paid tribute to Bud.

Trumpeter Thomas Marriott reflected: “When my brother and I were teenagers we spent many hours and dollars in there. Bud always had a recommendation, the new DownBeat, hot new release, etc. It was a paradise for jazz nerds and Bud always supported the local musicians by stocking their albums. … He gave a lot of love and attention to the musicians and the music and I’m very grateful to have called him a friend.”

“One of the great boosters of Seattle jazz,” saxophonist Steve Griggs wrote, while jazz radio stalwart Jim Wilke noted: “What a wonderful gift to Seattle he was.”

Co-founder and longtime Artistic Director of the Vancouver International Jazz Festival Ken Pickering passed away on August 10 from cancer.

Jazz fans and serious music lovers in this region will likely have benefitted from Pickering’s passion and expertise over the years. His far-reaching artistic vision helped to build the Vancouver festival into one of the world’s most forward-looking jazz events. With an ear for global jazz masters and important American improvisers, and a savvy approach to programming them, Pickering built enthusiastic audiences that were consistent with Vancouver’s cosmopolitan backdrop and international pulse.

Pickering’s dedication to Vancouver’s cultural community began with his own independent record store, Black Swan Records, which became a key shrine for serious musical pilgrims in the 1970s and ‘80s. However, his roots in the culture of the region go even deeper. He was of Haida and Shuswap descent on his father’s side, and his ancestors were among the founding families of Victoria, and the towns of Port McNeil and McNeil Bay.

Pickering is survived by his wife, Christine. A memorial service will be held on October 13, at noon, at the Christ Church Cathedral in downtown Vancouver, BC.