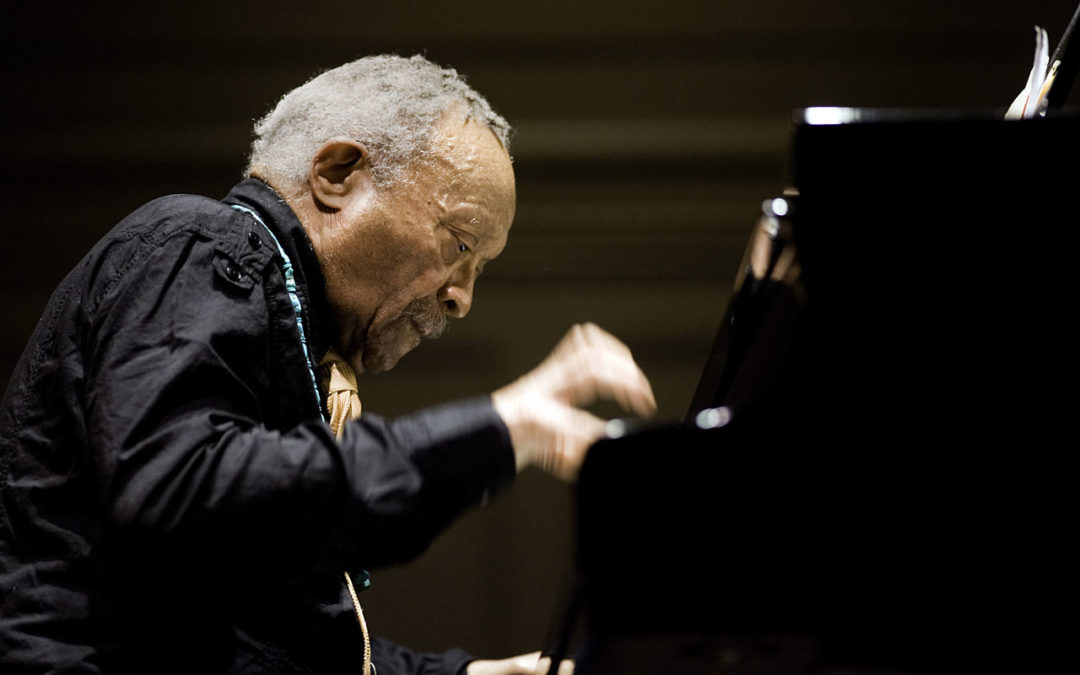 My first encounters with Cecil Taylor were defined by snow. I am not sure I had even heard Cecil Taylor, but at the age of 17 I took off work early and headed downtown to the Smithsonian to hear Mr. Taylor give a lecture. What I heard was unexpected—a 60-minute barrage of words connecting ideas like a language poet on Benzedrine, as baffling as it was intriguing. I tried to return that evening for the concert, but the roads were treacherous. This was my first impression of Mr. Taylor, and I still hadn’t heard a note. Six months later, I was now obsessed with his recordings. I drove with two friends on a college tour, including Antioch, where Taylor was teaching. We hit a major blizzard, and never made it.

I first learned of Taylor’s music reading A. B. Spellman’s Four Lives in the Bebop Business. I didn’t realize it then, but things Cecil said influenced me almost as much as his music. By the time I was a sophomore in college, I had heard Cecil play live more than once, and would many times again. For a period, he was the single greatest influence on my music. It was during this time that I decided to attend a concert I thought might be interesting. That I happened to see Olivier Messiaen and Yvonne Loriod perform Messiaen’s music for two pianos was, in retrospect, a miracle. I was astounded, and profoundly moved. It changed my life. But it was Cecil’s music that had opened the door. Without it I would have been lost.

The irony is that Cecil argued fiercely against something that Messiaen, and many others (John Cage included) championed, which was the notion that jazz, and its improvisatory language, lacked both the structural integrity and sophistication inherent in Western art music. (1) Cecil articulated the difference between an Afro-Centric and a Euro-Centric aesthetic—in particular, the idea that the body has inherent structural integrity. This wasn’t an intuitive vs. logical argument, feelings vs. thinking argument. He was advocating the notion that many cultures had faith in the intellectual intelligence of the body. Inherent in our physical being is a structural integrity—the brain is a muscle and the hands have a brain. (Note that we are talking about a relatively brief moment in European culture, and of a certain class. In addition, any virtuoso, in any musical style, needs to cultivate an intense relationship with the intelligence of the body.)

This was a discourse about structure and form. Electronic music furthered this debate in the mid-20th century. Some saw electronics as liberating artists from the body, in tandem with the removal of traditional interfaces to make music (instruments). With digital technology, this argument continues today. By contrast, Taylor was the fiercest modernist of his time, and deeply connected to the past, even the ancient. There was no contradiction; he viewed this paradigm as essential to truth and beauty.

Messiaen’s music is as deep and profound as any in the history of human existence. It is tempting, however, to criticize the Euro-centric position as elitist, even racist. (2) 1,200 words does not allow me to address this, nor am I the person to do so. And Cecil Taylor was, clearly, deeply passionate and articulate about the realities of race in 20th century America. But in addition, and in particular, he was fascinated by notions of hierarchy in aesthetics, and calling out the essential contradictions. Cecil wasn’t concerned with an “us vs. them” dialectic. He famously stated he “wasn’t afraid of his European influences.” He was a lover of ballet, the symphony, and the theater. Perhaps the Euro-centric position can be accused of culturally insensitivity, or ignorance—but also of being intellectually incomplete.

The “composition vs. improvisation” argument has, by now, become so soporific as to be almost mind-numbing. Cecil stated, “If an artist practices certain links and licks, structure will appear.” (3)

A pencil and paper are used to work through a motif, an algorithm creates a sequence, a pair of hands reworks a series of intervals. The only significant difference is the time scale. As Eugene Chadbourne said to me once, “Bird uses as much space as Monk, at twice the tempo!”  Milliseconds vs. two months at an artist residency. And if you don’t think the brain can be brilliant in milliseconds, then you aren’t awake. In fact, this is the counterargument I use with academics who tout improvisation as some sort of revolutionary construct. Hell, we improvise every time we get on I-5! If not, we’d all be dead by now.

Messiaen was deeply inspired by birdsong. Birdsong—I often think of it as the greatest rhythmic, non-metered music on earth. Not in strict pulse, always definitive and precise. An apt description of Cecil Taylor’s musical language. Eric Dolphy famously practiced in his yard in L.A. with birds. It wasn’t transcription, it was ear training—or the hippest iReal Pro ever.

I used to play sometimes at a place midtown called Soundscape, near 8th Avenue. One day I arrived for a gig and Cecil Taylor and Ornette Coleman were rehearsing for a possible collaboration. I heard later—and this was only rumor—that Ornette didn’t care for playing “out of time.” Considering Ornette and Cecil were the two icons of modern jazz, I was dismayed to hear this—but in retrospect it made sense. I adore Ornette’s music, but it’s fair to say it wasn’t as great a departure as many professed. Ornette abandoned chord structures, but he didn’t abandon long-standing melodic devices. I often show students two melodic fragments using the same leading tones, scale tone emphasis, etc., both on a dominant chord: one from a Charlie Parker solo, the other from a Mozart sonata. Ornette’s lines share many of the same devices—diatonic lines, but over a shifting tonality and a free length of phrase—another idea found in music from around the globe.

Cecil was interested in the shapes of intervals, the non-diatonic harmonic implications, and the rhythms within a phrase, free from a given tempo or pulse. Monk and Ellington surely led the way, and Coltrane worked both the traditional melodic devices and the intervallic. But the sound of Cecil’s language shares much with Webern, Ives, Ligeti, and Messiaen. Let any Ph.D. in post tonal theory analyze Cecil’s music, and structure will not only exist—it will be blindingly obvious. Like any great composer, the structures are clear, easily evident, and elegant.

A critic once described Cecil’s approach to the piano as “88 drums.” I don’t agree.

Cecil worked pitch sets and intervallic permutations with the best of them; he just arrived at them with a different methodology—an invitation to the logic of the body. And I don’t believe Cecil Taylor would find any contradiction that, as a pianist, he embraced the definitive trope of modern European music—the division of the octave into 12 equal parts. Because above all Cecil Taylor played the piano. He really, really played the piano—and we are all the better for it.

(1) Messiaen himself was a brilliant improviser as an organist, one of the remaining traditions of improvisation in modern European classical music.

(2) Much has changed since the 1950s and ‘60s, the 2018 Pulitzer Prize being an example, one that occurred as I was writing this. Cecil was an early pioneer in articulating these contradictions, and brilliant at doing it.  Of course, much remains the same.

(3) This is paraphrased. I could not find the exact quote.

← The 2017 Golden Ear Awards Letter from the Director →