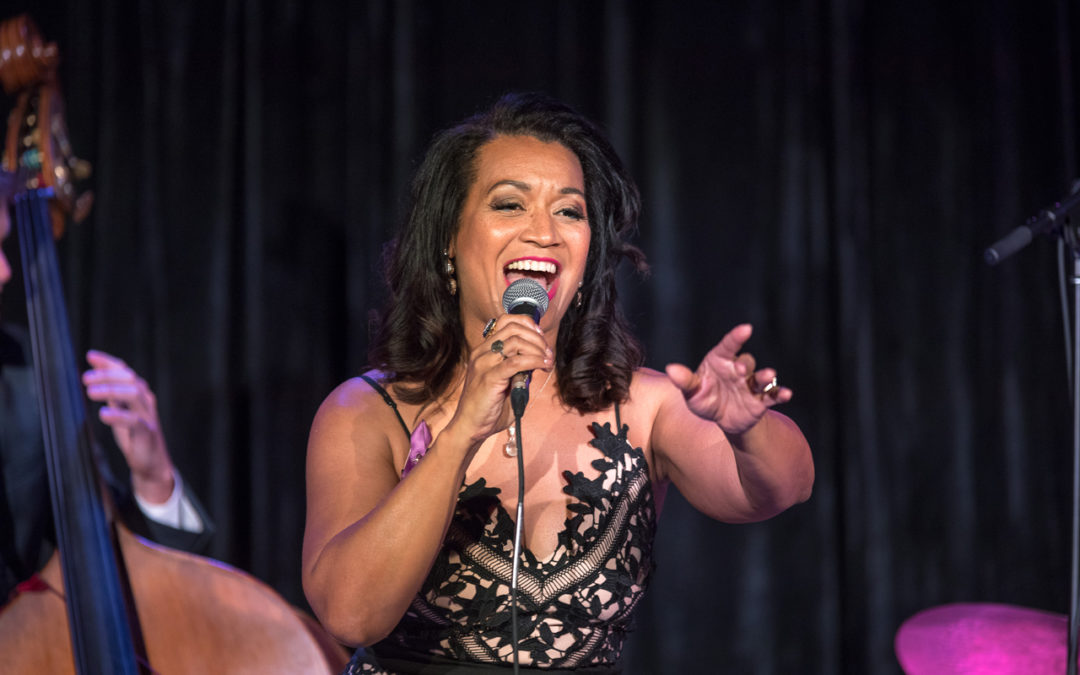 In the jazz world, 4:15am is more likely the time a musician goes to bed than the time a musician rises and starts their day. For Seattle jazz vocalist Jacqueline Tabor, rising hours beforethe sun is a matter of intense dedication to family, craft, and profession.

She is often at the gym by six, before power walking to her day job in downtown Seattle. After a day focused on her job, she is off to a night gig by Uber, or by bus, performing at the city’s finest clubs. It is a balancing act that would be unfathomable for most. For Tabor, her discipline is what makes her world work for her.

“So, number one, I meal prep. I sleep maybe five to six hours a day, says Tabor.I make a lot of lists. My husband, Ed Tabor, is super supportive. My kids are big now, so it’s a little bit easier.” Though Tabor’s love of music was realized at a young age, circumstances in her life kept her from pursuing her passion to sing, to perform. Those creative embers were to simmer in her soul for a time, before they could reignite

and flourish unimpeded. “There was a time where I wanted to sing, and then I got pregnant, and you know that’s a time in my life I don’t really talk about. My ex-husband was not a very nice person. He didn’t want me to sing in the church choir. I just stopped singing. We had our own business at the time, and I would sing and people would be coming in and saying that I sound great, and should sing,” recalls Tabor.

Tabor, a Bellevue native, moved to Louisiana for a spell, and while she wasn’t in pursuit of her musical passions at the time, she was constantly exposed to the blues, broadcast over area airwaves. Seeds were planted that would manifest themselves as the root of her approach to jazz vocals some years later. “I lived in Louisiana for far too long, and every Sunday every radio station was only blues. So, I was from Seattle, and I hated the blues, hated to listen to it because I was twenty and didn’t know anything. I remember an old lady told me that if you listen to the blues, you’ll hear the truth. It was kind of like a new respect for me. So [now]it feels really natural, it’s like a really good friend comes and visits me,” she says.

Upon returning to Seattle, Tabor was encouraged to sing by her sister, who was previously unaware of Tabor’s startling talent. Her sister had arrived home to hear a captivating tune floating through the house. She assumed Jacqueline had the radio playing on while taking a shower, when in fact, it was her voice filling the space with the sound she had been hearing inside of her head and heart for most of her life.

Tabor was about to embark on her career in music the way most artists do—the hard way. Long before she would go on to win the Seattle-Kobe competition in 2011, and receive Earshot’s 2018 Golden Ear Award for “Northwest Jazz Vocalist of the Year,” she hustled gigs everywhere she could, from dive bars to wedding receptions.

“I didn’t know anything, but for six years I did the hard stuff, the crappy gigs, hotels, lobbies and weddings. There was a point where I started the Jacqueline Tabor Jazz Band. Then I was fortunate enough to win the Kobe, and that was huge. I learned the hardship of being a bandleader and being a singer in a band, being a woman in the band, being black in the band, I learned a lot. I learned how to

get started without anybody helping me,” she states strongly. Since that time, Tabor established her star on the vibrant Seattle jazz scene with a monthly engagement at Tula’s, as well as a variety of local clubs and festivals. She released her third album, The Lady in the Gown in 2018 to critical acclaim, including a four-star review at All About Jazz.

This past spring, she made her debut at the Ballard Jazz Festival, an event that commonly features prominent vocal talents such as Greta Matassa and Gail Pettis. Tabor has firmly placed herself in that elite status. While Matassa’s voice is an instrument like no other, and Pettis sings with astonishing natural grace, Tabor’s style is absolutely drenched in the blues. Her voice is blatantly honest and unfiltered and

reflective of her lifelong story; her fears and courage, and the realization of her profound strength and confidence in her art.

Recently that natural, rising creative force has come to the attention of Michael Brockman, director of the Seattle Repertory Jazz Orchestra. She will be featured in the band’s next two productions, Jazz of the Harlem Renaissance, and Tribute to Billie Holiday. In those shows, she will delve into the roots of jazz through Bessie Smith and Ma Rainey, and the real-life interpretation of the blues through Holiday. While she acknowledges she has much to learn about all three of these trailblazing women, her natural inclination to channel her creative spirit through the blues would seem a natural fit.

“Between Bessie Smith and Ma Rainey, the whole history between the relationship of those two women is very interesting. We have to honor Bessie Smith, she was one of our first out black women who was in the arts, and is so powerful. We need to really honor that history. Michael Brockman loves to surprise me and ask me to do things that I’ve never done before, which is why him and I get along so well. I love the challenge and I love to challenge him back. I like to get him out of his comfort zone,” she adds candidly.

No matter one’s idea of “what jazz is,” it is undeniably rooted in the blues. Being intimate with that as a performer is not something easily acquired through the current jazz culture that thrives in academia. A feeling for the blues is something inherited through the natural pulses and rhythms of everyday life. Tabor’s musical journey encapsulates that feeling.

“It’s just been in the last year and a half that I’ve come into my own where I’m allowing myself to be genuine, be my real self and be more authentic. If you’re hearing the blues come out, it’s because I’ve been restraining it up till now” she says, “now, it naturally pours out of me.”