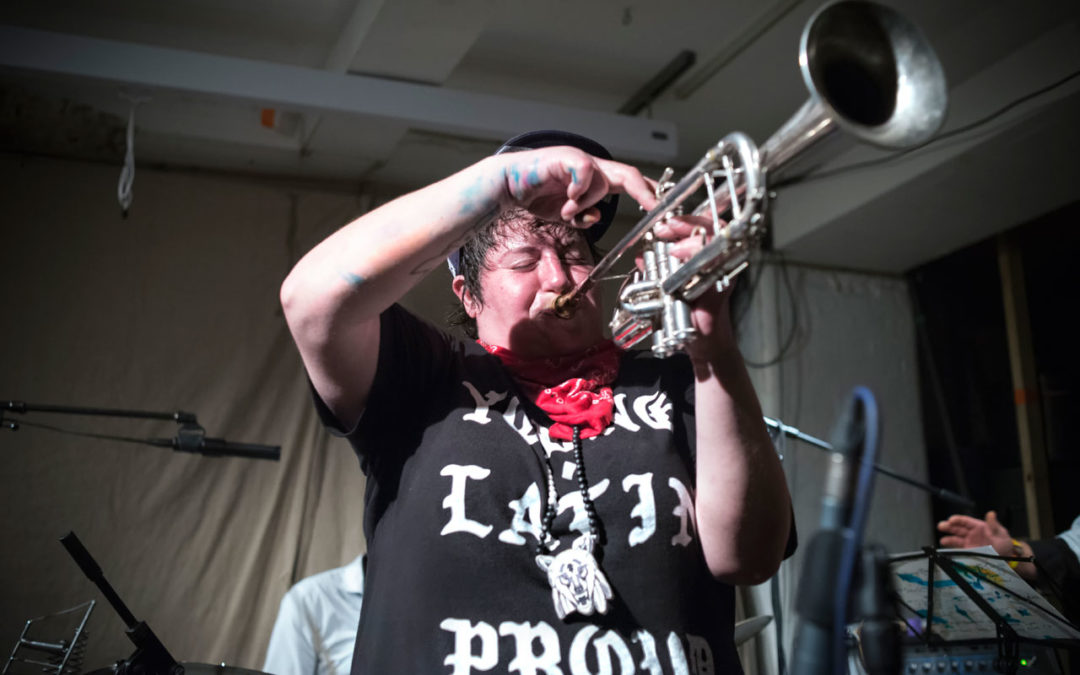 The modern era of jazz and impro­vised music has ushered in a new generation of prophetic voices and community-driven sounds that are quick to dispel any question that the art form remains a living one. Trum­peter and bandleader Jamie Branch is certainly high on this list, and Seattle will be graced by her mind-expanding quartet on February 18th at the Royal Room in Columbia City. Get ready for a concert with sounds that are deeply of this time, addressing the pain of our sociopolitical climate while carrying a celebratory torch that we all need to get through it all.

A Chicago-bred trumpeter and re­cent transplant to New York City, Branch has struck a formula in her creative expression that carries forward the spirit of protest and raw commu­nal sound in jazz and the avant-garde, without losing sight of a spirit and message that is wholly for the present moment. Her distinctive style of free-jazz is a synthesis of Chicago Creative Music, punk, hip-hop, post-rock, ska, and much more. In October 2019, Branch released FLY or DIE II: bird dogs of paradise, the much-anticipated sequel to her 2017 debut album Fly or Die, which took the jazz world and be­yond by storm. FLY or DIE II features the same instrumentation of trumpet, cello, bass, and drums, yet the new version of the band features young cellist Lester St. Louis in the place of Tomeka Reid, alongside the original bassist Jason Ajemian and drummer Chad Taylor, who trace their roots back to Chicago with Branch.

The ensemble offers a combination of pizzicato (plucked) cello and bass lock in with drums to create playful, warp­ing grooves that echo rhythms from around the world, with Branch at the helm guiding us all to other-worldly sonic experiences.

If “fly” and “die” are to be under­stood as opposites, wherein musical freedom and transgression always ex­ist in proximity to criminal ways of the world that would otherwise bring about its destruction, Branch’s FLY or DIE quartet fearlessly embraces such liminality with no-nonsense musical rejoicing. Sacrificing nothing and risk­ing everything, FLY or DIE is a call to outdo the demons of the world with the most abundant, spirited celebra­tion of life through community-mind­ed music.

The first Fly or Die album evokes Branch’s presentation of a distinctive­ly Chicago sound in New York that launched her onto a global stage. The sequel is the development of that pro­cess through years of touring Europe and beyond. Part collectivist sonic an­them, part political lament on Ameri­can empire, part celebration of roots and personal history, FLY or DIE II sees Branch deepen her unique sound-forward compositional process, as well as documents her expansion into new expressive modalities. Along with her ever-shining trumpet shouts that move between raucous beauty and trickster-like melodies, the album features Branch’s first ventures into singing, as well as a wide use of electronics. The album is an undeniable celebration of the legendary Chicago jazz scene, which Branch herself has described as having a “punk aesthetic.” Bring big ears and zero pretenses to this one. –Carlos Snaider