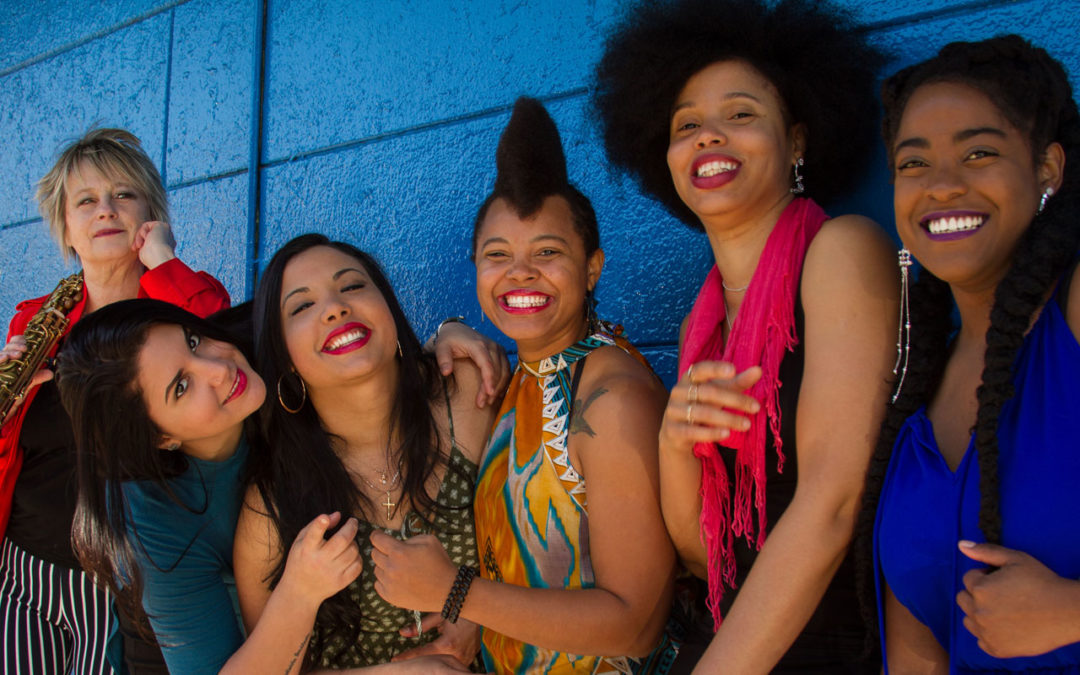 Jane Bunnett and Maqueque photo courtesy of the artist

Supported by the Government of
Canada.

Maqueque is a Cuban women’s ensemble led by soprano saxophonist Jane Bunnett that has thrilled festival and concert goers around the world since its debut now several years ago. The group blends scintillating Afro-Cuban rhythms, folkloric influences, exhilarating jazz, and soulful vocals, with a leader who has a long history of exploring Cuban music.

With Maqueque, Jane Bunnett has reached a peak in that long embrace of the island’s culture, particularly its Afro-Cuban melodies. It has been a glorious history: her longstanding ensemble Spirits of Havana, for example, has provided early opportunities to such future greats as Dafnis Prieto, Yosvany Terry, and Pedrito Martínez, and David Virelles.

Bunnett has won five Juno Awards and several other top honors in her native Canada, and has been nominated for three Grammy Awards. Her Cuban collaborations have been depicted in two documentary films about her work, Spirits of Havana and Embracing Voices.

With Maqueque she brings together some of Cuba’s most outstanding female musicians. She says she formed the group because, during her decades of visiting Cuba, she observed that almost three-quarters of the students in the country’s many conservatories were female, and yet the jam sessions she attended at night would be almost exclusively male. Of the woman musicians, Bunnett says: “When they finish all their training, you don’t see them out on the scene. At jam sessions, I would notice some of the young girls I had seen at the schools just sitting on the sidelines, happy to watch their boyfriends up there playing. It seemed really strange.”

It was a chance encounter with a now-renowned vocalist, Daymé Arocena, that finally prompted Bunnett to do something about the situation. First, she and her husband, trumpeter Larry Cramer, met Arocena during a trip to Havana. At a hotel jam session that Bunnett organized for some Cuban artists, the vocalist sat in and proved so remarkable that a few months later, when she served as artistic director for “Funny Girls and Dynamic Divas,” an annual fundraising event for Sistering, a Toronto-based social service agency for women, she brought Arocena to Toronto to perform and the singer, Bunnett says, “brought the house down.”

Bunnett and Cramer scouted Cuba with Arocena, looking for similar talent—outstanding female musicians in their 20s. The result has been an evolving group of early-career and more established players. The Seattle lineup is Jane Bunnett on soprano saxophone and flute, virtuoso drummer Yissy García, Tailin Marrero on bass, Dánae Olano on piano, Melvis Santa, vocals and percussion, and Mary Paz, on congas, batás, and vocals.

Arocena’s grandmother, a practitioner of the Afro-Cuban Yorùbá religion, provided the band’s name, which translates to “the spirit of a young girl.” That, says Bunnett, captures the vibe of the group: “I imagine that’s what I was like as a ten-year-old girl. I was very energetic, I could be sweet and I could be feisty. That’s Maqueque.”