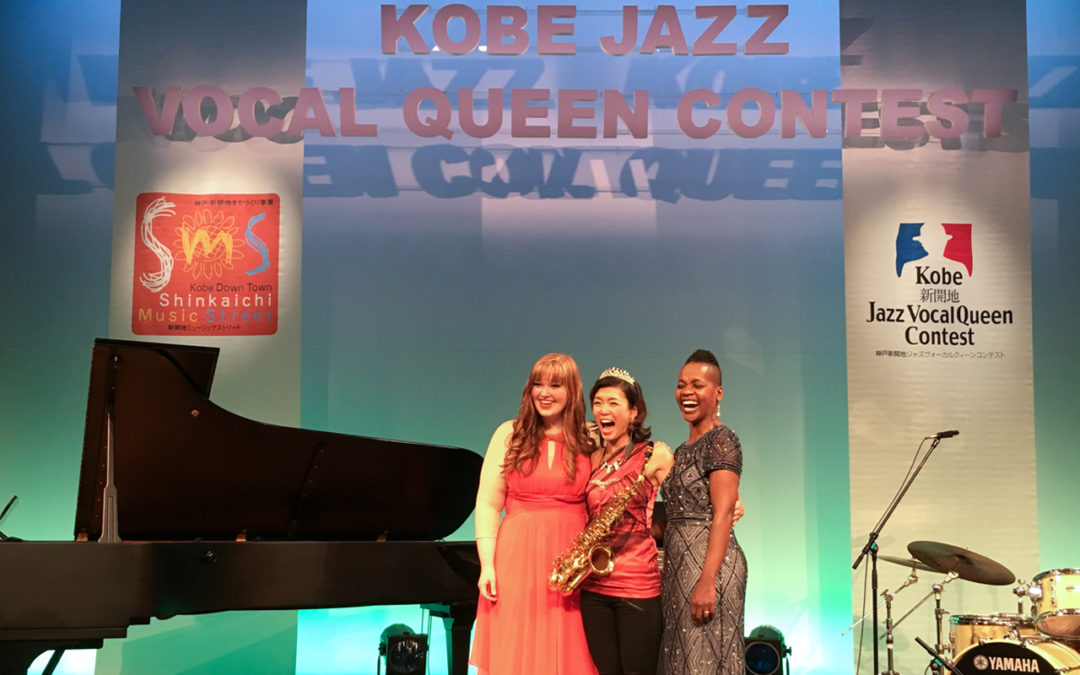 Yep, Jazz and Japan go together like peanut butter and jelly or tempura and well…more tempura. Since 2000, winners of the Kobe Jazz Vocal Queen Contest have visited Seattle to perform at Dimitriou’s Jazz Alley. In 2005, Seattle started its own competition at Dimitriou’s Jazz Alley and began to send two American jazz vocalists (one adult and one high school student) to Japan to perform at the Kobe contest. My recent journey to sister city Kobe after winning this year’s Seattle competition was a prize the keeps on giving.

When I’m asked what kind of music I perform and I mention jazz, I’m often met with a slight air of incomprehension followed by small talk about the hors d’oeuvres. I do what I do because it feeds my soul, but too many of those exchanges can promote buds of cynicism. The opportunity to be a part of this cultural exchange was incredibly affirming.

High school winner Christina Buno and I performed at the Kobe Jazz Vocal Queen Contest, where 10 Japanese singers were competing for a trip to the U.S. to perform at Dimitriou’s in September. The singers were skilled and enthusiastic about the art form. They also appreciated the previous winners, some of whom have reached celebrity status. I was asked often, “Do you know Greta Matassa?” While I live in Olympia, I was proud to represent Seattle and its rich jazz history.

The love of jazz in Kobe is so apparent by the numerous tiny jazz clubs that we came across during explorations. Clubs with names such as Great Blue, Bar Martini, Basin Street, Green Dolphin, and Alfie peppered the urban landscape. And it wasn’t just Kobe; I also had the chance to sing at tiny clubs in Osaka and Tokyo. Each venue had its own unique flavor, and enthusiastic (if small) audiences.

To hear a Nina Simone song or Ella song sung in such a different place was so affirming and made me proud to be a part of this jazz tradition. As I was interviewed by the mistress of ceremonies after singing in Kobe, I became acutely aware that this music belongs to everyone, but that being an African American it is in my blood, and it is a part of my experience. I was and am enormously proud and honored to be a part of such a uniquely American tradition.